Lessons From Chambers Bay: Best Seat in the House 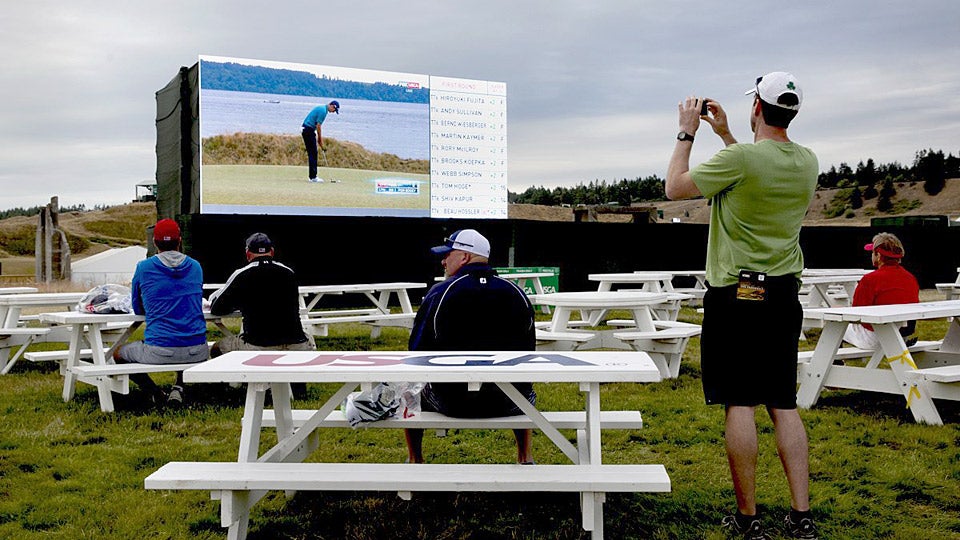 For ticket-buying spectators who waded into the dunes, the Chambers Bay Open was a drag. They faced obstructed views, severe slopes and expansive areas that could not be accessed, including the entire eighth hole. Such a shame.

They were looking in the wrong spot.

On a bright afternoon I stumbled upon an open lawn between the souvenir shop and the first fairway dubbed Spectators Square. It had a sweeping view of Puget Sound and an impressive row of food and beverage tents. Hungry fans lined up 10 deep. A joint called Seafood Shack peddled shrimp hoagies for $9. Two booths down, Ruth’s Chris offered steak sandwiches for $15 and plastic cups of local IPA for seven. In the name of journalism, I purchased one of each. I strolled across the grass and sat at a wood picnic table with a gleaming lacquer finish. A large video screen showed the Open television broadcast at low volume. I ate the sandwich and sipped the beer and watched a train roll down the rails, the same set of tracks that flank the golf course. Who needs a golf course?

All around, happy Washingtonians enjoyed the day. The sound sparkled in the sun. A friendly couple eventually sat down and offered to buy me another IPA. In the name of journalism, I declined. My judgment would be virtuous and clear. My judgment would be that this was as good as it got all week.