On May 31 swing instructor Hank Haney tweeted to the United States Golf Association a grainy video of Bernhard Langer’s putting stroke from the U.S. Senior Open that shows Langer’s left wrist touching his shirt — and, perhaps, also his chest, which could be construed as a violation of Rule 14-1b.

“Just out of curiosity, is this legal @USGA?” Haney wrote. “What exactly is anchoring? Lots of Champions Tour players are questioning this.”

It was not clear whether the video showed Langer making a practice stroke, during which golfers are permitted to anchor, or an actual stroke, but regardless Haney’s observation lit a fire.

That night, Golf Channel analyst Brandel Chamblee joined the fray with a tweet to his 135,000-plus followers that included a photo of an acceptable “nonanchoring” technique. “This is what nonanchoring is meant to look like,” he wrote. “If I wanted to putt with a long putter and remove all doubt, I’d follow suit.”

A few weeks later Chamblee doubled down with a lengthy Golfchannel.com column in which he cited Langer and one of Langer’s closest rivals, Scott McCarron, as “the only two” players on their tour “who have not obviously changed their techniques.” He added, “I cannot understand why they would risk even the hint of suspicion when it comes to the nature of how they play this game.”

GOLF.com has learned that soon after that story was published Langer and McCarron addressed the anchoring allegations with Chamblee on a conference call organized by the PGA Tour. Also on the line were PGA Tour Champions President Greg McLaughlin; Brian Claar, PGA Tour Champions’ vice president of Rules, Competitions and Administration; and Thomas Pagel, the USGA’s senior director, Rules of Golf and Amateur Status, who was asked to participate to provide clarity on the rule. (All three declined to comment on the specifics of the call.)

That the Tour felt the need to initiate the teleconference speaks to what a thorny issue this has become, especially with Langer in the midst of a historic season in which he has won three senior majors and McCarron enjoying a stellar season of his own with two wins, including a major title at the Senior Players.

“They wanted me to hear from them what they were doing,” Chamblee said of the call. “But I had already looked at many, many videos of them playing and putting and zoomed in and took pictures and watched their explanation with [Golf Channel host] Dave Marr in a telecast where they went through what they were doing.”

After all parties voiced their views, the call “ended in the proverbial ‘we’ll agree to disagree,'” Chamblee said. “I left [the call] thinking that the USGA might go and rewrite this rule. I didn’t leave thinking that Langer and McCarron would change the way they were putting. I said on the call that, ‘If you’ve all been able to successfully change the way that you putt, moving the butt end of your putter away from your body, why don’t you go try to successfully move it away from your shirt? If we’re just talking about another inch, why not move it another inch? There’s a noticeable difference.'”

Langer’s word, though, is not enough for Chamblee.

“Has Bernhard Langer demonstrated great integrity his entire career? Yes, he has. But in this particular instance it doesn’t look like he’s demonstrating great integrity,” Chamblee said. “So while I believe in people, I tend to believe what I see more than what I hear. So if it looks like someone is breaking the rule then it’s not enough for them to say that they’re not — they have to demonstrate that they’re not.”

On July 7 Langer, McCarron and the USGA issued a joint statement in which the players defended their techniques and the USGA stressed that its officials had “seen no evidence of a player breaching the Rule, which does not prohibit a hand or club to touch a player’s clothing in making a stroke.”

McCarron says the debate boils down to golfers correctly interpreting the rule, which includes a clause that says there is only a breach if the player had the intention of either directly anchoring or creating an anchor point.

“Hopefully people are more informed of what the rule actually is, and what the intent actually is, and what Bernhard and I do,” McCarron told GOLF.com in a brief interview after the first round of the Constellation Senior Players Championship last month, which he went on to win. “We don’t write the rules, we just play by the rules.”

McCarron declined to comment about the call with Chamblee. 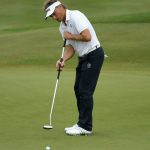 You may also like Tour Confidential: Is the anchoring ban in need of a facelift?

Despite Langer and McCarren’s protestations, Chamblee has refused to back down, telling GOLF.com that he’s not the only observer questioning the PGA Tour Champions’ top two money earners.

“I told Bernhard and Scott that I was the tip of the iceberg,” Chamblee said.

Langer and McCarron are among many PGA Tour Champions players who continued to use long putters after the anchoring ban went into effect. But most players have avoided the wrath of rules mavens by keeping their forearms and the butts of their putters well off their bodies.

“I have it four or five inches off my chest,” says Michael Allen, an eight-time winner on the senior tour who still employs a long putter. “I don’t think anyone would ever even think or suggest — except for uneducated golfers — [that I’m violating the rule] because I’ve made sure that it’s always completely off my body.”

Steve Flesch, a PGA Tour Champions rookie and former anchorer, believes the crux of the problem is that there is too much gray area in how the rule is written.

“If you want a black-or-white determination on this, then the putter can’t touch anything at all,” Flesch said. “The hard part is, you play a round when it’s raining and you go out there with a rain suit on, now you’ve got to move it farther away from you and you’ve got to adjust on the fly how you’re putting. If you add a sweater, then take it off, you can get closer or farther.

“As it’s written right now I don’t think you can enforce it, and it’s kind of a shame because then if an official says, ‘You know what? I think you anchored there, I’m going to have to call two shots on you,’ then he’s questioned the player’s integrity and his intent. Now it becomes personal between the official and the player.”

“It looks like Scott McCarron’s arm is melded into his body and it looks like Bernhard Langer’s hand is touching his body — it looks like they’re anchoring,” he said. “When they demonstrate on the golf course that they’re clearly not violating the rule, I think everybody will be happy.”

Until then, expect more agitation.