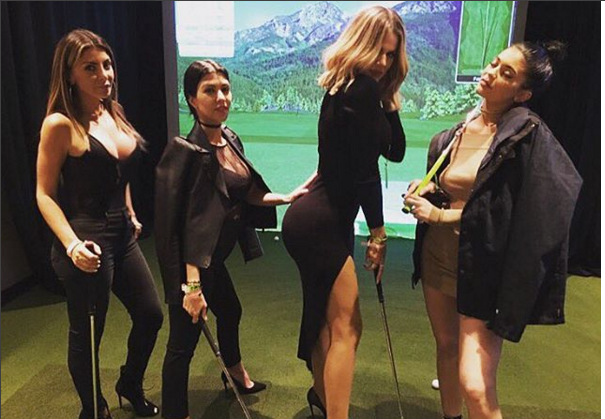 Kourtney Kardashian, Khloe Kardashian and Kylie Jenner each tried their hand at mini golf this week at the Forum in Los Angeles.
@kourtneykardash

This is a totally normal way to spend Wednesday night with the family.

Khloe and Kourtney Kardashian hung out with their little sister, Kylie Jenner, this week in Los Angeles and spent part of the evening brushing up on their mini golf skills at the Forum. Their friend, Larsa Pippen, rounded out the foursome.

It’s traditional to snap a photo of your group on the course’s signature hole, and the Kardashains obliged. There’s a lot going on in this photo. Let’s investigate.

First, Khloe appears to have a solid putting stance. Legs shoulder width apart, knees in an athletic pose, hips slightly bent forward. Until you see she’s putting one-handed! C’mon Khloe, now’s not the time to get cute! You’re never going to make anything like that! We know the feeling after you make a couple of putts though: the hole looks twice as big, and all of a sudden you’re feeling like Jordan Spieth. That’s where mistakes come in. Don’t abandon the fundamentals that got you here, Khloe. Both hands on the putter.

Kourtney, ever the older sister, is trying to help out her little sis with the stance, as she has her hand on the small of Khloe’s back, presumably to get her to bend more at the waist in order to get her eyes over the ball for purer roll and more consistent contact. Dave Pelz would be proud.

Kylie appears disinterested in this competition. Clearly, she is already out of the hole and picked up. Earlier in the round, she must have been over-rotating her shoulders in the stroke, because she has donned a training aid to restrict her shoulders and keep them more on-line for a more fluid motion. It must have worked initially because Kourtney has done the same. Typical golfers, always stealing swing secrets from each other.

The fourth member of their group seems disinterested. She’s already thinking about where she can get one of those training aids.