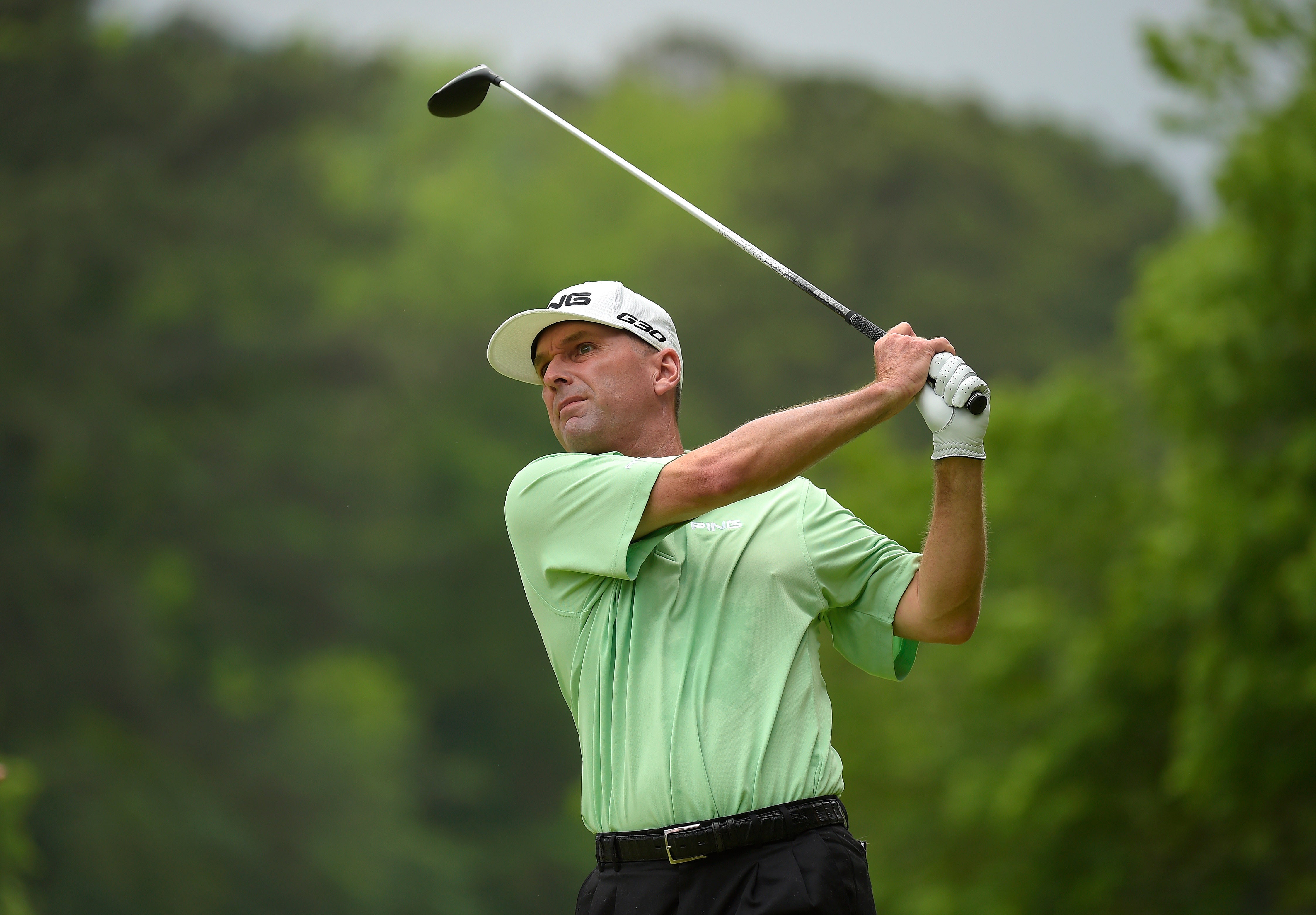 Kevin Sutherland tees off on the 10th hole during the second round of the Champions Tour Regions Tradition.
Stan Badz / PGA Tour

BIRMINGHAM, Ala. (AP) — Kevin Sutherland and Jeff Maggert both looked as if they were finishing off just another round.

The businesslike Sutherland and Maggert each eagled the par-5 11th hole Friday and shared the second-round lead in the Regions Tradition at 10 under.

Sutherland shot a 6-under 66 at Shoal Creek to catch up to Maggert, the opening-round leader in the first of the Champions Tour’s five majors. Maggert birdied the final two holes for his second straight 67.

Neither player showed much emotion after hitting their final shots and both said their mindset doesn’t change with the lead or without it. It’s probably wise because no 36-hole leader has won the Tradition since Tom Watson in 2003.

“It’s the same as it was the first two days: Get the ball on the fairway and see what happens from there,” Sutherland said. “That’s what you need to do here, and I’ve done it the last two days. And also just kind of have fun and enjoy the moment.”

Maggert’s approach: “The leaderboard doesn’t really come into play until maybe the back nine on Sundays, so just keep playing hard and making birdies.”

Michael Allen was three strokes back after a 67, and defending champion Kenny Perry had a 69 to join Bernhard Langer and Fred Funk at 5 under. Langer shot 66, and Funk 69.

Sutherland is seeking his first Champions Tour victory. He tied for second in Mississippi in March.

Maggert won the Mississippi event last year for his lone title on the 50-and-over tour.

Maggert rallied from bogeys on Nos. 4 and 5, then had a strong finish. His tee shot into the bunker on the final hole ended up serving him well.

“To be honest with you, it was the best angle to shoot at that flag,” Maggert said. “I had a good lie in the bunker so actually a bad drive turned out to be a good one there. I was able to be a little bit more aggressive and shoot toward the flag.”

He set up the eagle with a hybrid approach from 220 yards that settled 8 feet past the hole. Sutherland’s 233-yard hybrid shot was even closer.

“I wasn’t really trying to hit it at the pin,” Sutherland said. “I was just trying to hit it toward the middle of the green. I overcut it a little bit and when it was rolling it banged the pin. It literally was less than two inches from the hole. It landed over the bunker and the next thing I know, the ball came to an abrupt stop.”

Allen birdied the final two holes. On the last, his 50-foot putt hovered so long on the hole that he took several steps toward it before it plopped in.

“I thought it was hanging on the back of the hole, but (caddie Pete Bender) said he blew really hard,” Allen said. “He said he blew the ball in the hole. It’s kind of nice, because so many times you hit good putts that don’t go in. It’s nice to hit a long putt like that. You’re just trying to get close. I was happy to two-putt. To have it go in is a nice bonus, a great way to finish the day.

Langer rebounded from an opening 73 with a 31 on the first nine holes. He had a run of three straight birdies end on No. 11. The two-time Masters champion is coming off a closing 75 and a 21st-place finish at the Insperity Invitational in Texas.

Two-time winner Tom Lehman matched Langer and Sutherland’s tournament-low round of 66, 10 shots better than his opener. He was 2 under.