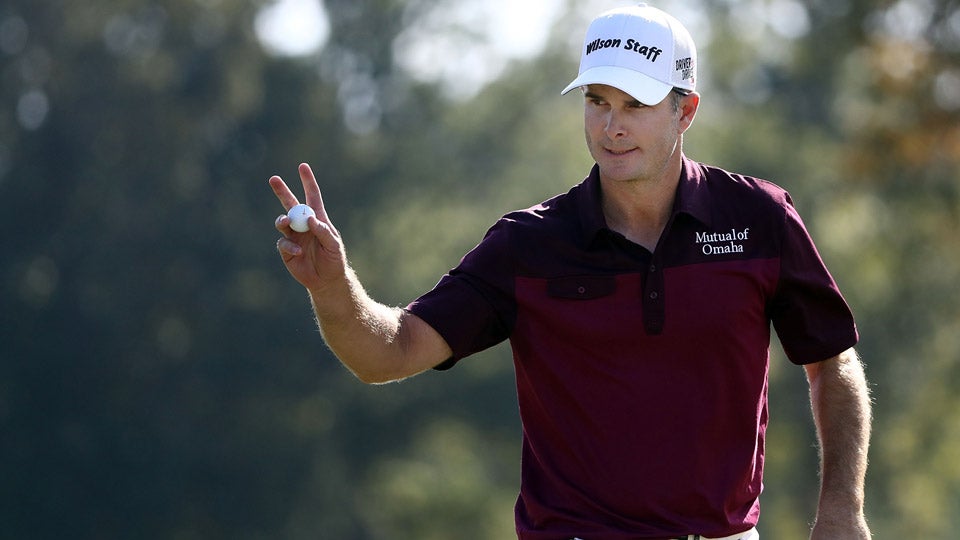 Kevin Streelman during the first round of the 2016 Sanderson Farms Championship.
Getty Images

JACKSON, Miss. (AP) — Kevin Streelman wasn’t the only one who took advantage of nearly ideal conditions at Jackson County Club. The 37-year-old did it a little better than everyone else, though, finishing with a 9-under 63 for a two-shot lead after the first round of the Sanderson Farms Championship.

Streelman made 10 birdies Thursday, including eight in an 11-hole stretch. With more good weather forecast for the next three days, he said the low scores will have to keep coming if he wants to have a shot at winning the tournament.

“When you get PGA Tour players on great greens with great conditions and there’s a fair amount of wedges in our hands on this golf course – they’re going to make some birdies,” Streelman said.

Trey Mullinax, Seamus Power and Carl Pettersson all shot 65 to sit two shots behind Streelman. Seven others – including Lucas Glover and Camilo Villegas – were among those three shots back.

Defending champion Peter Malnati shot a 71. Of the 132 players, 100 shot even par or better.

Streelman is a two-time PGA Tour winner, with his last victory in 2014 at the Travelers Championship. He missed the cut two weeks ago in the season-opening Safeway Open.

Streelman said he wasn’t planning on playing at Sanderson Farms until his poor performance in California. It’s been a good decision so far: The 9-under 63 is his career-low score in relation to par. He shot an 8-under 62 at the Travelers in 2008.

“It was pretty flawless ball-striking to be honest,” Streelman said. “Hit a lot of fairways.”

Mullinax – a rookie making his fifth career PGA Tour start – was among the others who took advantage of the forgiving course to post a low score. The 24-year-old finished tied for 22nd at the Safeway Open two weeks ago and continued to play well in Jackson.

“The goal this week was to give myself the best chance to win, and today was a good start,” Mullinax said. “We have three days left.”

The 29-year-old Power is making just his second start on the PGA Tour. He finished 15th at the Olympics while playing for Ireland over the summer and said the experience helped give him confidence.

“The biggest thing to remember is I’m not going to win the tournament at 7 under,” Power said. “I’m going to have to get to 20-under, so that’s the overall goal you have to get to and then see what happens from there.”