Justin Thomas Wins Tournament of Champions to Kick Off 2017 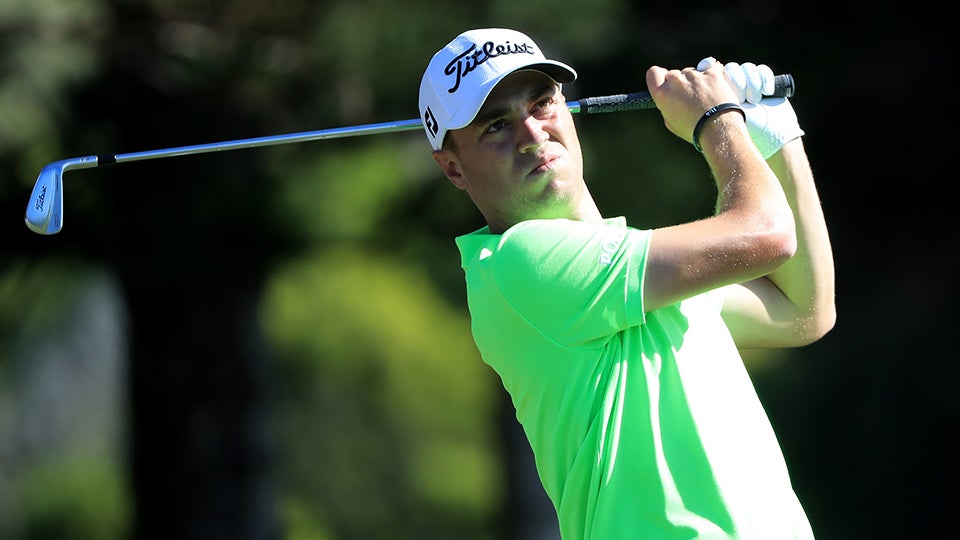 Justin Thomas kicked off 2017 in a big way, winning the SBS Tournament of Champions on Sunday in Kapalua.
Getty Images

KAPALUA, Hawaii (AP) Justin Thomas had to sweat it out more than he wanted to enjoy that view down the 18th hole at Kapalua on Sunday.

Thomas had a five-shot lead with five holes to play when he was caught in a battle with Hideki Matsuyama down the stretch in the SBS Tournament of Champions. Thomas responded with a defining shot in his young career, an 8-iron approach he ripped from 214 yards to 3 feet on the 17th.

Matsuyama, one shot behind and needing birdie to stay in the game, ran his 30-foot putt about 8 feet by the hole and three-putted for bogey. Thomas knocked in his short putt for a three-shot lead, and he went on to another birdie for a 4-under 69 and a three-shot victory.

Thomas won for the second time this season, and third time in his career. His other two PGA Tour titles were at the CIMB Classic in Malaysia.

Matsuyama holed a tough flop shot on the 14th for eagle, and then Thomas hooked a 4-iron into the hazard on the par-5 15th and made double bogey. Matsuyama had a chance to tie him until narrowly missing a 10-foot birdie on the 16th. The 24-year-old from Japan closed with a 70. Thomas is the only player to beat Matsuyama over the last three months. In his last six tournaments worldwide, Matsuyama had four victories and a pair of runner-up finishes – both to Thomas, in Kuala Lumpur and Kapalua.

Thomas, who finished at 22-under 270, is the first multiple winner on the PGA Tour in a season that began last October. He moves to No. 12 in the world, a big victory that squarely moves him into the conversation of a growing list of young stars in golf.

All he could think about was next year.

”It changes things going forward because I know I’m coming back here,” Thomas said about the winners-only event along the rugged coast of Maui.

The scenery down the 18th toward the blue Pacific was never more spectacular for Thomas, along with the site of his parents off the 18th green who saw him win for the first time. His father, Mike Thomas, is a longtime head pro in Harmony Landing in Kentucky who is still his coach.

Jordan Spieth closed with a 65 to tie for third with Pat Perez (67) and Ryan Moore (71). Spieth and Jimmy Walker, came down to the 18th to congratulate the winner.

Thomas started the final round with a two-shot lead and no one got closer until his blunder on the 15th. One of the longest hitters in golf with his slight build, Thomas really did miss a shot until the ninth hole, and that’s when he got a huge break.

With the wind stiff and in his face, he got quick with his driver and hit a snap-hook into the knee-high weeds left of the fairway. He hit a provisional for a lost ball and was about ready to abandon the search when a TV spotter was summoned to give an indication where it went. They found the ball, and it was sitting up a few inches above the roots, allowing Thomas to at least hack out into the fairway.

He followed with a 3-wood onto the green for a two-putt par after starting with a shot that made double bogey appear likely.

Thomas made a 10-foot birdie putt on the 13th for a five-shot lead and appeared to have the tournament in hand. But then Matsuyama answered with his flop shot for eagle. Thomas, haunted by poor shots on the 15th hole the previous two rounds, picked the wrong time to try to atone for it.

He had left an 8-iron well out to the right, below the elevated green. This time, with a strong wind out of the left, he overcompensated with a 4-iron and went into the hazard. After a penalty drop, he failed to reach the green, chipped up to 8 feet and missed to walk off with double bogey.

”I stumbled more than I would have liked to do,” Thomas said. ”But it shows where my game is at right now. I had some woes there, but I stuck it out to still get it done.”

One big shot on the 17th changed everything.

Spieth, his best friend in golf since they were teenager, expected this to be just the start for Thomas.

”I think it’s potentially floodgates opening,” Spieth said. ”The guy hits it forever. He’s got a really, really nifty short game. He manages the course well. He’s playing the golf course the way it should be played, and honestly, he’s taking advantage of the easier holes.

”It’s awesome to see,” Spieth said. ”He’s going to be tough to beat next week, too.”

Both head over to Oahu for the Sony Open.