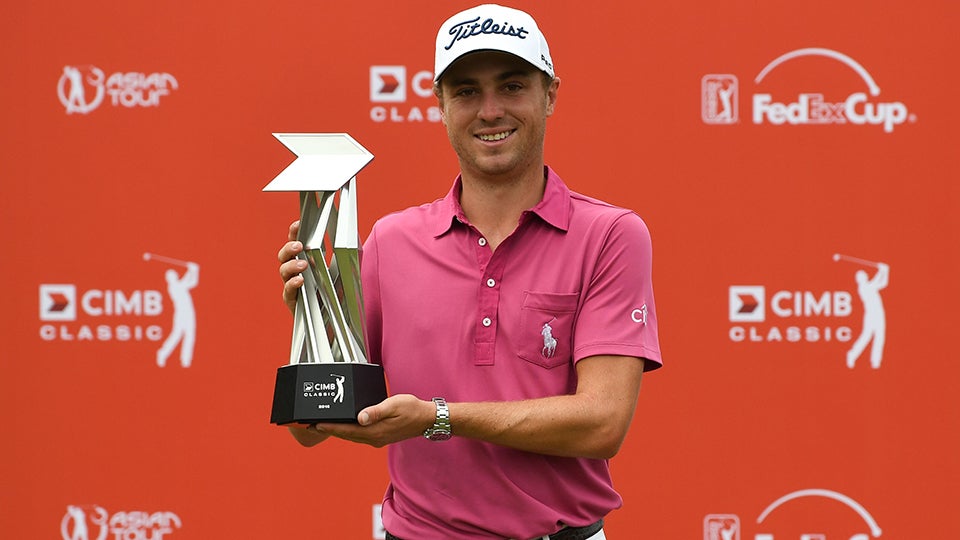 Justin Thomas poses with his trophy after winning the 2016 CIMB Classic at TPC Kuala Lumpur. Thomas shot a final round 64 to successfully defend his 2015 title.
MOHD RASFAN

KUALA LUMPUR, Malaysia (AP) — Justin Thomas completed a fairytale return to the CIMB Classic with a successful title defense after eight birdies in the final round Sunday earned him a three-shot victory over closest rival Hideki Matsuyama.

The American did not match his record tournament score of 26-under 262 in 2015, but still finished with an impressive 23 under for only his second PGA Tour title.

“It’s great to win again here. It’s a place I’m comfortable with … Hopefully I will be able to come back next year,” said Thomas, who shot a 64 to match his first-day score.

Overnight leader Anirban Lahiri, who led the field by four shots into the final round, lost ground after a quadruple bogey on the third hole, after his tee shot went into a tree. The Indian recovered admirably with a birdie and eagle in the next two holes, but the early setback meant he only settled in joint third with Derek Fathauer (67).

“I got unlucky with the tee shot and just compounded my errors. My short game again, coming up a little bit to bite me,” said Lahiri, the 2015 Asian Tour Order of Merit winner.

Marc Leishman (66) finished one shot away from Lahiri in fifth, with Keegan Bradley (68) one spot below him on 16 under.