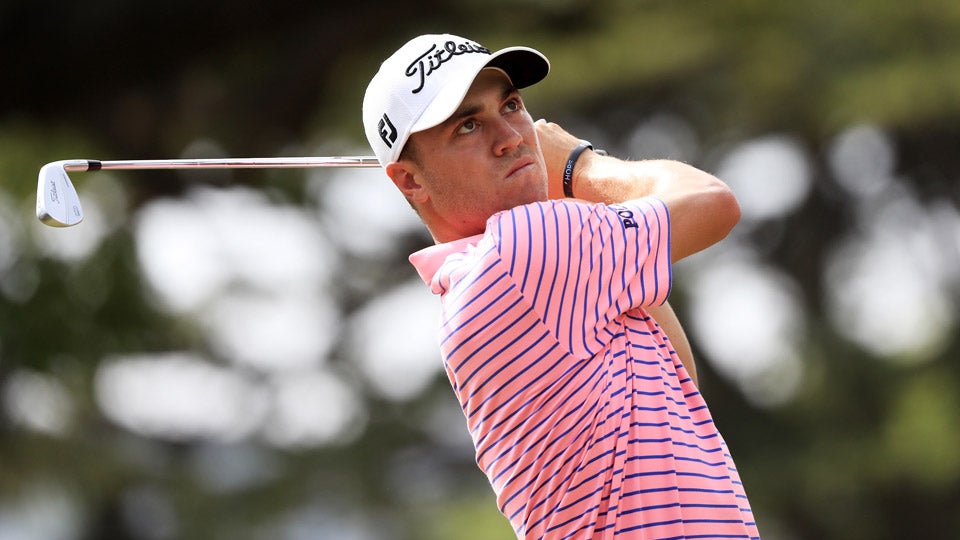 Justin Thomas on Saturday during the third round of the 2017 Sony Open.
Getty Images

HONOLULU (AP) — Justin Thomas made a 15-foot birdie putt on the final hole Saturday for a 5-udner 65 to tie the 54-hole score record on the PGA Tour and build a seven-shot lead going into the final round of the Sony Open.

No one has ever lost a PGA Tour event with a seven-shot lead, and Thomas has given no indication that will change.

His goal was to not drop any shots on another calm day at Waialae, and he wound up stretching his lead as he goes for a sweep of Hawaii. That last birdie putt put Thomas at 22-under 188, tying the mark Steve Stricker set at the 2010 John Deere Classic.

Thomas got into the record book with an eagle on his final hole in each of the previous two rounds at Waialae – a 59 on Thursday for the eighth sub-60 round in tour history, and the 36-hole scoring record Friday.

He had another chance on the par-5 18th until his second shot clipped a palm frond and came up well short. He pitched to just inside 15 feet below the cup, and poured in the putt.

Zach Johnson shot a 65 to keep pace, though he remained seven shots behind.

Olympic gold medalist Justin Rose (66) and Gary Woodland (68) were eight shots behind, though the 23-year-old Thomas has turned this into a one-man show with one round remaining as he tries to join Ernie Els in 2003 as the only players to win both Hawaii events on the PGA Tour.

The course remained so vulnerable that Kevin Kisner nearly produced the second 59 of the week. Kisner made a 25-foot birdie putt on the eighth hole to reach 9 under for his round. Needing an eagle to shoot 59, he drilled his tee shot on the fast fairways of Waialae, hit 8-iron to 9 feet and thought he had made it. The putt stayed to the right and burned the edge of the cup, and Kisner had to settle for a 60.

“Can’t be that upset,” Kisner said.

He went from making the cut on the number to a tie for sixth, though hardly in contention. Kisner still was nine shots out of the lead.

Thomas had only a few stressful moments, such as the par-3 seventh when his tee shot bounded down a steep still on the right into a fluffy lie. He hit a flop shot to about 12 feet and hit the putt so pure he started walking even before it dropped.

Thomas led by at least four shots the entire round. He made his first birdie with a two-putt on the par-5 ninth, drove into a greenside bunker on the par-4 10th and got another birdie and he was on his way.