Jordan Spieth’s Season Was One of the Best Ever, And We Can Prove It! 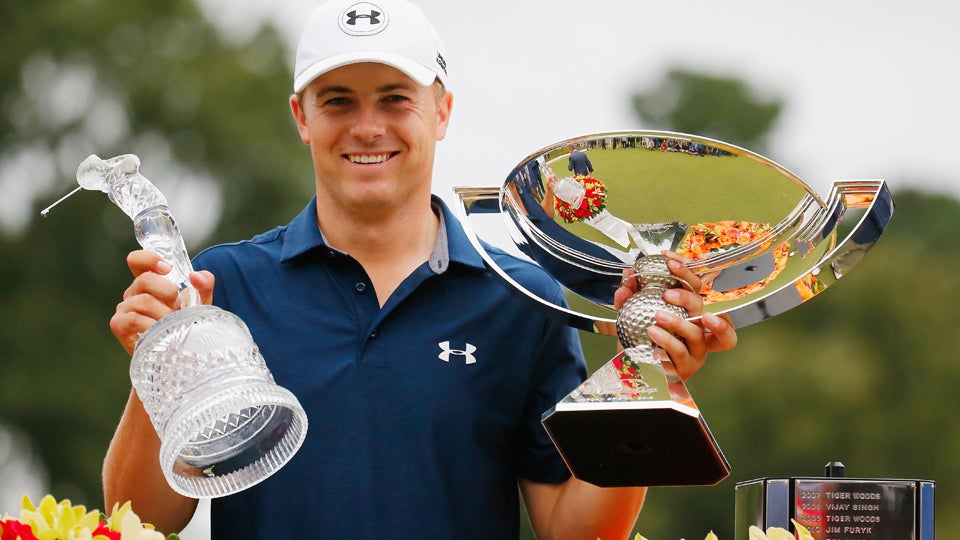 If there was any doubt about who deserved the PGA Tour’s 2015 Player of the Year honors, Jordan Spieth’s four-shot victory at East Lake eliminated it. Spieth entered this week with two majors and two other Tour wins, while Jason Day countered with a major of his own, four more wins, and an gaudy record over the season’s final stretch. If you squinted hard (or needed easy column fodder), there was at least some room to debate which of these two young superstars was the Tour’s best this season.

Spieth’s season looks like one of the best in recent years by all conventional measures: He led the Tour by a wide margin with 15 top 10s in 25 starts, he won almost 35 percent of the potential money available to him, and his 68.91 scoring average bested Day’s by a quarter of a stroke. But the best barometer of his dominance is a statistic called Expected Wins.

Expected Wins shows the likelihood that each golfer’s performance relative to the field would result in a victory. The performance required to win Tour events and even major championships varies from event to event. Sometimes another golfer in the field dominates and makes it impossible for anyone else to match his effort. Other times the field bunches up and a pedestrian performance is enough.

For example, Jason Day’s 20-under 268 at the PGA Championship at Whistling Straits would typically result in a victory at a major more than 99 percent of the time, while Danny Lee’s 13-under 267 at the Greenbrier was his third-best performance of the season and would result in a Tour title just 1 percent of the time. Using Expected Wins to judge the quality of each golfer’s season is similar to using Scoring Average, but Expected Wins focuses on the truly elite performances that typically produce victories, while removing the impact of luck.

According to Expected Wins, Spieth’s season is nothing short of historic. Using season-long results since 2007, Spieth’s performance in majors has been worth 2.16 Expected Wins — by far the best. He soundly beat both Padraig Harrington (2008) and Rory McIlroy (2014) — the other golfers to win two major championships in a season since 2007. Not only was Spieth’s Masters win extremely impressive, but also his play at the PGA would have been good enough to win 94 percent of all majors.

Judged against the overall performances of every golfer in recent seasons, Spieth’s 2015 season ranks only behind Tiger Woods in 2007 in terms of Expected Wins. The chart below shows the best and next-best performance in each season since 2007 in Expected Wins. Not since 2009 has the leader in Expected Wins led the runner-up by a margin as wide as Spieth over Day.

In regular Tour events, Spieth narrowly trails both Jason Day and Henrik Stenson in Expected Wins. Day’s resounding victories at The Barclays and BMW Championship were worth 0.99 and 0.93 Expected Wins. Stenson’s season turned out to be winless, but his is a hard-luck tale; his performances at The Barclays (0.85), Deutsche Bank (0.82), and Arnold Palmer Invitational (0.51) were all more than worthy of a victory. Spieth did not have any comparable dominant wins in regular Tour events, but tallied strong performances at the Valero Texas Open (0.67) and Memorial Tournament (0.31) in addition to his wins at the Valspar Championship (0.18), John Deere Championship (0.34) and Tour Championship (0.44).

In the end, this is just one more way to tell you what you already know: Jordan Spieth was far and away the world’s best golfer this season.