Jordan Spieth’s Chip In at Colonial Even Surprised Him 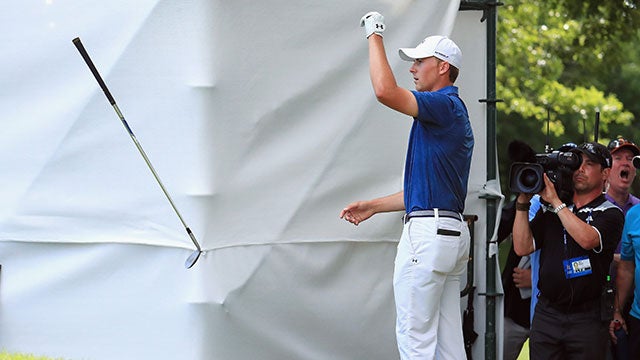 Jordan Spieth is arguably the best putter in golf. But even he doesn’t mind not having to putt every now and then.

Spieth was heating up down the stretch of the Dean & DeLuca Invitational with three straight birdies on holes 10-12 and a long birdie putt on the 16th hole to take a one-shot lead. On the 17th hole, Spieth missed the green with his approach shot after catching a flier from the rough. Not a problem. Spieth pulled his wedge and hit a perfect pitch that landed on the fringe and rolled directly into the cup. The crowd went wild, and Spieth sealed the tournament.

“I didn’t have to do too much,” Spieth said after his round. “That’s still a really tough touch shot to hit when there’s that much pressure on. It’s tough to control your hands and control the club face the way that you would when you’re just practicing it. There’s no way to practice for that kind of pressure, but it came out a little knuckler that landed on the fringe, and it was lucky for it to go in, obviously, but I was very pleased with the way I struck it. Seventeen was one of the luckiest holes I’ve ever had personally. I hit a guy on the side on the tee ball that goes into the first cut, and then I get that drop and then chip in. If I’m anyone playing against me, I’d be pretty upset at that.”

See video of the shot below.