Jordan Spieth’s Brush With History at the 2015 British Open The view from the par-3 9th tee was spectacular, but as a whole Chambers Bay was anything but fan-friendly.
Robert Beck for SI

Monday afternoon in St. Andrews was all promise. The golden arms on the clock high on the Royal and Ancient clubhouse wall, right behind the 1st tee, were making their silent, inexorable drop in the direction of half past the hour. Jordan Spieth—21-year-old golf professional and sui generis personality, for his extreme maturity, intelligence and golfing skill—was on the green up ahead. What would the rest of the afternoon on the Old Course bring? Would Spieth become the second man in the history of the game to win the Masters, the U.S. Open and the British Open in the same year, joining Ben Hogan, who achieved the triple in 1953?

That, of course, was not the question Spieth was asking himself. He was, as yoga instructors like to say, in the moment. The Texan was considering the spitting sky, the rising wind, the pale green grass below his white shoes. He was making lightning-fast computations that defy language about how hard to hit his opening 15-foot birdie putt, through a water stain that looked like the ring left by a leaky tea cup on a pinewood table. If it dropped, he would be tied for the lead with his playing partner, Jason Day, as well as the two smallish men standing about 360 yards away, almost under that grand clock.

All four—and a half-dozen other front-liners—were playing for keeps. Paul Dunne, a 22-year-old Dubliner and recent Alabama-Birmingham graduate, was on the 1st tee, seeking to become the first amateur to win the British Open since Bobby Jones in 1930. Jones did it wearing wool knickers, a baggy sweater and a tie. Dunne was wearing tight, stretchy Under Armour pants and shirt, with a matching cap. He could have pinched the entire uniform off Spieth. The two youths share basic characteristics—look-elsewhere duds, tannish hair and tannish skin, heavy thighs and open, trusting faces. Dunne was asked last week if he was ever mistaken for Spieth. “Every day,” he said.

The diminutive player alongside Dunne was Louis Oosthuizen, who grew up on a dairy farm in Albertinia, South Africa, and now lives in a sparkly, gated golf community off I-95 in Palm Beach Gardens, Fla.

The last time the Open was played at St. Andrews, in 2010, Louie Louie—play the enduring bass line in your head, if you like—won by seven shots. The Open visits St. Andrews every half-decade or so, and Tiger Woods won the Open on the Old Course in 2000, by eight shots, and in 2005, by five. Winning on it requires a peculiar combination of power, finesse, guile—and luck. The best golfers are lucky, as 65-year-old Tom Watson, making his Open swan song, implied last week. A second win on the Old Course would put Oosthuizen in the golfing pantheon. Try this on, just for size: King Louie.

Oosthuizen was at 12 under par, sharing that fine number with Dunne and Day, an Australian who lives in his wife’s hometown of Westerville, Ohio. Last month, at the U.S. Open at the wildly steep Chambers Bay Golf Course, Day collapsed on the final hole of his second round, overcome by vertigo, later diagnosed as being caused by an ear infection. Spieth, one of his playing partners, pushed back the prying cameras. All four of those 1st-hole golfers on Monday afternoon, half-two approaching, were playing for the same thing, although Day was the only one to capture it in a single word: immortality. That’s what you get if you win on the Old Course, a rumpled sliver of sullen wasteland where the game as we know it first took form.

The 144th Open finished on Monday because the Friday play was suspended by rain and the Saturday action was halted by wind. It wasn’t until Saturday night that two rounds were in the books. Day and Oosthuizen played those opening rounds with Woods himself. Woods recalled for Day his winner’s processionals down the 18th fairway and to the home green, at the intersection of two crowded, public streets, Golf Place and a lane called The Links. “It’s the greatest walk in golf,” Woods told Day. They’re buddies, which means that Woods regularly sends texts to Day.

“Yeah,” Day responded to Woods, recounting the conversation for reporters. “It’s easy when you have a seven-shot lead.”

On Monday evening nobody would be approaching the 18th green with a seven-shot lead. Too many players, too tightly packed.

The Old Course, truly public, is a loop. It begins in town, heads straight out along a brackish bay for seven holes, makes a wide, irregular horseshoe turn over the next four holes, then runs straight back into town from 12 to the short, quirky par-4 finale. The course is loaded with personality and charm, and every hole has a name. The last is called Tom Morris, for the man who maintained it for nearly 40 years as the 19th century turned into modern times. The greatness of the Old Course is bound to its simplicity and its ties to the game’s sandy, windblown past. You march out and find your way home. You experience this and that along the way. You’ll never play a course that promotes more storytelling. That’s why St. Andrews has so many bars.

On the tee, from South Africa, LOUIS OOSTHUIZEN.

Jordan Spieth took one last look at the cup on the 1st green.

They make you play all 72 holes. What 60 minutes is to the NFL and what 27 outs is to major league baseball, 72 holes is to professional golf. It can grind on you, the requirement to play all 72 holes, which is why the game’s greatest and most enduring players—Hogan, Nicklaus, Woods; Jordan Spieth may someday join the list—had or have grind-it-out personalities. They often have a particular, exacting type of intelligence too, with OCD tendencies. By five o’clock, Oosthuizen and Dunne were through the 11th, and all the contenders were playing through the cross breeze of the homeward seven. Guys barking at their airborne shots—Spieth, Sergio García, even mild-mannered Zach Johnson and Adam Scott—found their commands scattered by the moist wind. Some of the players went for mittens the size of boxing gloves between shots. It wasn’t that cold and it wasn’t that wet—it was just dank. No surprise to see mitts on García, a thin-blooded Spaniard who lives in Orlando. But how do you explain them on Zach Johnson, native son of Cedar Rapids, Iowa? Can you imagine Zach Johnson with Dustin Johnson’s talent? Or Dustin Johnson, unrelated to the 2007 Masters champion, with Zach Johnson’s every-shot-counts personality? Through 36 holes D. Johnson had a one-shot lead, and there was a chance he could erase the pain of his three-putt finish when he was in position to win last month’s U.S. Open, much as Phil Mickelson did in 2013, when he didn’t win at Merion but did the next month at Muirfield. But Dustin shot 75–75 in rounds three and four at St. Andrews, while Zach grinded it out for 72 holes. He holed a sliding bomb on the last to shoot a closing 66 and to post 15 under par, which made him, at 5:40 p.m., the leader in the clubhouse. Four golfers were in position to catch or beat him: Spieth, Oosthuizen, Day and another Australian, Marc Leishman. The target number was there: 15 under par. Golf, in the end, is a math problem, among the other problems it presents. The intersection of Golf Place and The Links was jam-packed with fans who wanted to see the final act.

On a gorgeous summer night in Scotland, dusk lasts for hours and you can play until 10. But Monday was dank from start to finish, and when Spieth was on number 17, the Road Hole, in the six o’clock hour, dusk had already enveloped the ancient links. Monday’s promise was holding on for dear life, if your hope was to see another triple crown, 62 years after Hogan first put it on.

The 17th is 495 yards, and its owner-operators, the gents at the St. Andrews Links Trust, continue to call it a par-4. Call it whatever you want, the fact is Spieth came to the penultimate hole, as others have before him, needing a four.

Spieth had made that 15-foot birdie putt on the 1st, which meant the game was fully on. He was tied for the lead and chasing Hogan’s ghost. 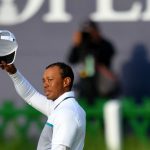 Then came the adventures. He birdied the 5th and the 6th. He was hanging around and talking to his ball and twisting his body and slapping his thigh and staring holes in his yardage book. His double bogey on the par-3 8th would have undone a less resilient player, but Spieth, with his cool head, has what the old baseball scouts call bouncebackability. Birdies at 9 and 10. Now he was chasing, improvising, “freewheeling,” as he and his caddie, Michael Greller, call it.

After a birdie at 16, Spieth stood on the tee at the Road Hole tied with Z. Johnson and Leishman. The wind had peaked, and it was hurting, and Spieth did not have the firepower to reach the green in two. His bogey five meant he needed a birdie three on the last, on Tom Morris. He aimed for the clubhouse clock and made the walk Tiger had described to Day. In the bleachers beyond the green, the Scots stood for the man looking for a third straight major.

It sees all, that clubhouse clock, including Spieth’s four on the last. He was one shot short of the playoff. For a moment he lowered the brim of his baseball cap, and suddenly his cheeks seemed more red. He walked hastily off the repurposed mass burial ground. The slow-burn dance of lost chance.

Oosthuizen did what Spieth did not. He made a three on the last, thereby making the playoff a three-man affair. (Day missed the playoff as well, after his birdie putt at the last came up a couple of turns short; Dunne limped home with a 78 and finished 30th.) The extra innings were played over four iconic holes, aggregate score: the 1st and the 2nd going out, the Road Hole and Tom Morris playing in. From a second-floor window above the Tom Morris Golf Shop, a white-haired woman named Sheila Walker watched the threesome walk to the green her great-great-grandfather, Tom Morris himself, built with his hands.

Johnson won. Who saw that coming? He used all 72 holes, plus the extra four, which he played in one under, one better than Oosthuizen and three better than Leishman. Johnson is a battler and a grinder—like Spieth, like Hogan—who had finished a shot out of the playoff that Spieth won at the John Deere.

It was a couple of minutes before eight in St. Andrews, according to the big clock, when Spieth came down the stone steps of the clubhouse to the 18th green and gave Johnson a congratulatory handshake and hug. But you could tell he was burning inside. Hogan would have loved that. Grit ran in his blood, and he could smell it on others. He’d see himself in Jordan Spieth—and in Zach Johnson too.