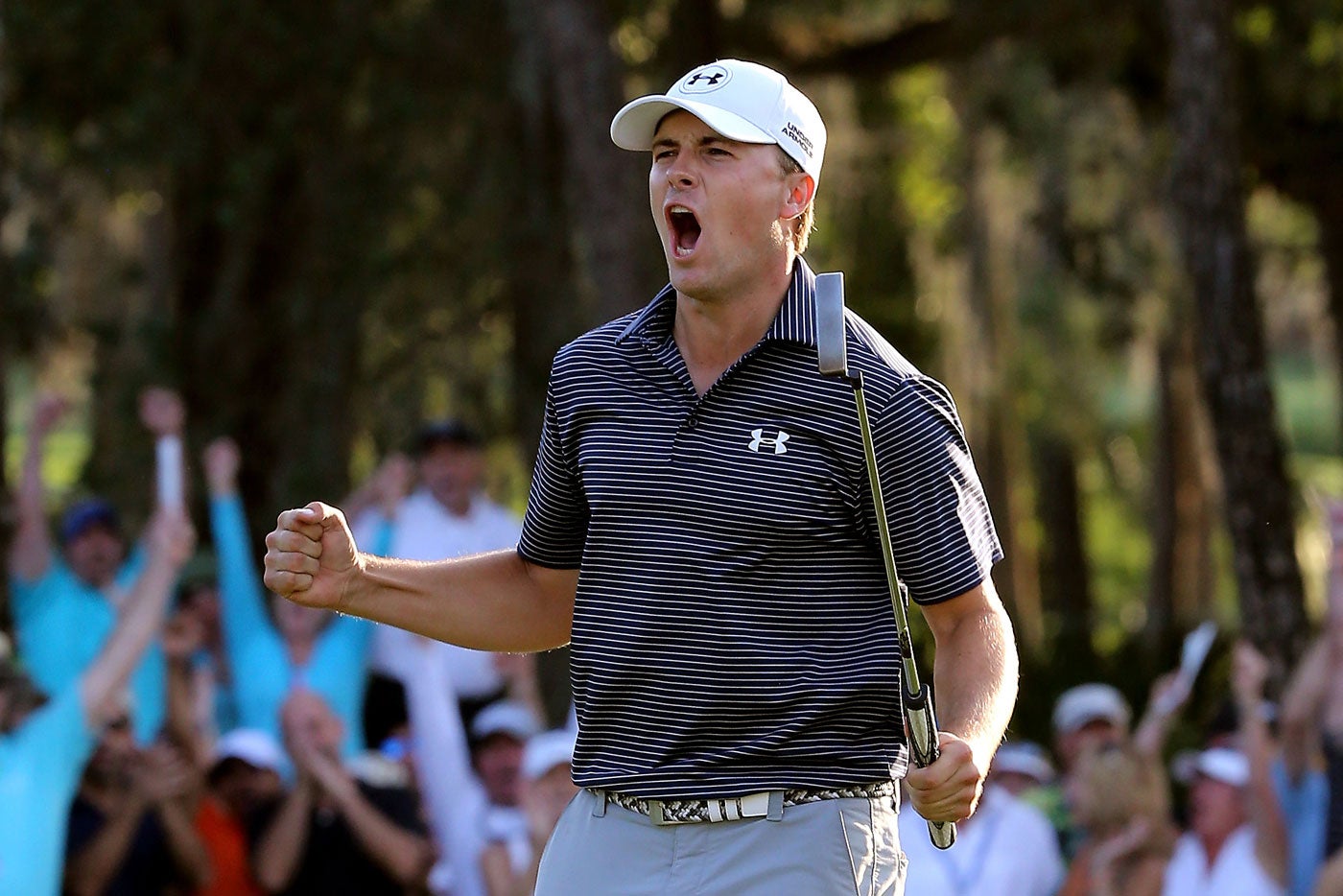 PALM HARBOR, Fla.—The future of American golf is in good hands whenever the day comes that Tiger Woods and Phil Mickelson are done winning.

The only problem with Patrick Reed and Jordan Spieth is deciding exactly which former legend they most resemble.

When Reed poured in a must-make 30-footer on the Valspar Championship’s final green, his eyes got wide as saucers, he pumped his fists and he bellowed some kind of war cry.

He’s brash and cocky and damned good, but is he more Raymond Floyd or Lanny Wadkins? Either way, he’s got Hall of Fame pedigree working.

When Dallas-area native Jordan Spieth got to the Copperhead Course’s last five holes, he stated pouring in putts like strawberry-banana smoothies out of a pitcher. He sprayed some shots, sure, then he got up and down for amazing pars on the last three holes to get in a playoff, including a super-clutch 15-footer at the last.

Spieth, still only 21, putts like Mickelson—better from 20 feet than from five feet—scrambles like a young Jose Maria Olazabal and wills the ball into the cup like a young Seve Ballesteros. His great skill is getting the ball in the hole from anywhere and everywhere.

RELATED: View the Final Leaderboard from the Valspar Championship.

Anywhere includes from 28 feet, 2 inches on the 17th green in the third hole of a playoff with Reed and Sean O’Hair. The other two had already played and Spieth had a right-to-left breaker from long range for the win.

The stroke was all Phil, the emotion was all Seve.

Slap another brick in the wall in the legend of Spieth. He was disappointed last year when his tee-to-green play slipped as the summer went on, following his brush with destiny at the Masters in a loss to Bubba Watson. But Spieth looked all new-and-improved at Tiger’s off-season event, which he won impressively, and even better when he won the Australian Open by six strokes.

This is his second PGA Tour win and he’s laying the foundation for a big career, just as Reed has done with his four PGA Tour titles.

You had to see these saves to believe them. At the 17th hole in regulation, he missed the green right and found his ball buried in a bad lie in thick rough on a downslope. Spieth went into full super-flop mode and got it on the green, incredible stuff, and made the putt. Then at 18, his drive found a fairway bunker, he hit behind his iron shot, then dropped a nice pitch shot behind the hole and made that clutch putt, too.

“Those two saves are among the best five I’ve ever had,” Spieth said. There must be something about No. 17. It’s where Spieth later holed the winning playoff putt and it’s where, two years ago, he holed another unlikely flop shot that earned him a PGA Tour card and secured a foothold on the pro tour.

“That’s a nice Hollywood ending,” Spieth said, smiling as he let the coincidence sink in. “Today, to have that putt go in—it’s my favorite hole I’ve ever played.”

Before the raving continues, how about a little love for O’Hair’s comeback. He was a promising young star once upon a time but at 32, he’d lost his tour card for a couple of years and plummeted from a high of 12th in the world rankings to 401st before this week. He has revamped his game, rediscovered his confidence and renewed his desire to compete. So much so, in fact, that he’s moving his family to Florida from West Chester, Pa., so he can focus year-round on his revived career.

“Walking up the 16th fairway in the playoff, I heard some fan say, ‘You can beat these two young guys,’” O’Hair said. “That really made me feel old.”

O’Hair nearly ended the playoff on the second extra hole when his 25-foot birdie putt looked in but suddenly veered off to the right edge and lipped out. This was after Spieth figured to end the drama on the first extra hole, No. 18. Reed was plugged under the lip in the front bunker and O’Hair was on the back of the green and Spieth spun back an approach shot to six feet. He didn’t look like young Crenshaw on this one, however, as it slipped to the right off the putter face and didn’t turn back, rolling just past the cup.

Even with all three players tying the hole, there was drama. O’Hair did well to make a par after slicing his tee shot into the right trees by the NBC tower for a second straight time. Reed looked as dead as King Tut with his buried lie but he somehow slashed it out, falling away from the bunker lip as his follow-through stopped dead, and watched it get to within eight feet. He made that putt, too, to stay alive.

At the second extra hole, Reed caught a flier and went over the green into a thick lie, Jolly Green Giant thick. He played a superb flop shot to within inches for an easy par that was anything but easy. Raymond and Lanny couldn’t have done it any better.

Those two holes after the 30-footer for birdie at the 18th in regulation that brought the loudest cheer of the week made Reed look practically bulletproof. Ever the competitor, though, Reed was bummed by the outcome. “I didn’t hit any greens in the playoff,” he said. “I didn’t give myself much of a chance. Jordan’s a great champion, though.”

The good news for American golf is that Spieth and Reed, who both have superstar potential, have well-rounded games and have that something special, that ability to rise to the occasion and define the moment. Can you think of any other American Ryder Cuppers who have shown that? Maybe Rickie Fowler making birdie on the last four holes to halve his single match in Wales. But really, anyone else? 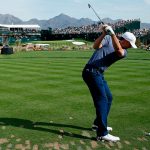 You may also like Tour Confidential: Waiting for Jordan Spieth

Reed showed off a stellar short game in addition to some clutch putting and he’s got some power. Spieth’s short game is a match for anyone in golf. He’s got his swing sorted out, he feels, and he’s happy that he’s more confident over the closer putts. Neither one has a significant weakness and better still, their strengths are scoring.

“The big key for me down the stretch is greens hit in regulation,” Spieth said. “My biggest strength is making putts from outside 15 feet. It always has been, for some reason. I’m almost better from 20 feet than I am from six. I’ve been putting better. So my short game has really shined.”

The playoff was a familiar pairing for Spieth. He and Reed were Ryder Cup partners last year. They also faced off in the Greater Greensboro Open playoff, won by Reed. Spieth knew full well Reed’s ability to produce in the clutch.

“After those two saves Patrick made on the first two holes of the playoff, I thought, ‘If he gets a birdie putt, he’s going to make it,’” Spieth said. “Walking to 17, I didn’t like that he was still in the playoff. You can’t count him out. He’s fiery and he’s such a competitor.”

When they gathered to go back out to the 18th tee to start the playoff, Spieth told Reed, “‘Hey, Patrick, here we go again.’ But I don’t think he heard me.”

The playoff thriller capped an exciting final round. Leader Ryan Moore hung in there until the end. He owned the Mongolian Reversal of the day, going from one shot behind Spieth after five holes to two ahead after Spieth bogeyed and Moore holed a 7-iron shot from the fairway for an unlikely eagle at the sixth. Moore birdied the 11th and 12th holes to open a two-shot lead, but it was quickly erased by the playoff trio plus Swede Henrik Stenson. Moore and Stenson came to the 18th needing birdies, it turned out, to join a playoff. Stenson made par, Moore made bogey.

The whole day of fireworks gave the Valspar Championship a legit claim on being the most exciting tournament on tour this year. The Northern Trust Open was a thriller, too, with James Hahn playing the underdog role. But this one had great play on a tough final nine. Reed, who shot 66, and O’Hair, who shot 67, posted 31s on the closing nine. Stenson played the last five in three under par, Reed the last four in two under.

In addition, with Spieth and Reed in the mix, the Valspar finish carried important implications for the future. These guys are stars already and potential world-beaters.

A finish like this is the best kind you can hope for in golf. It leaves you wanting more. Bay Hill is next week? Yeah, can’t wait.