Jordan Spieth Trails by 2 in Suspended Second Round at Colonial 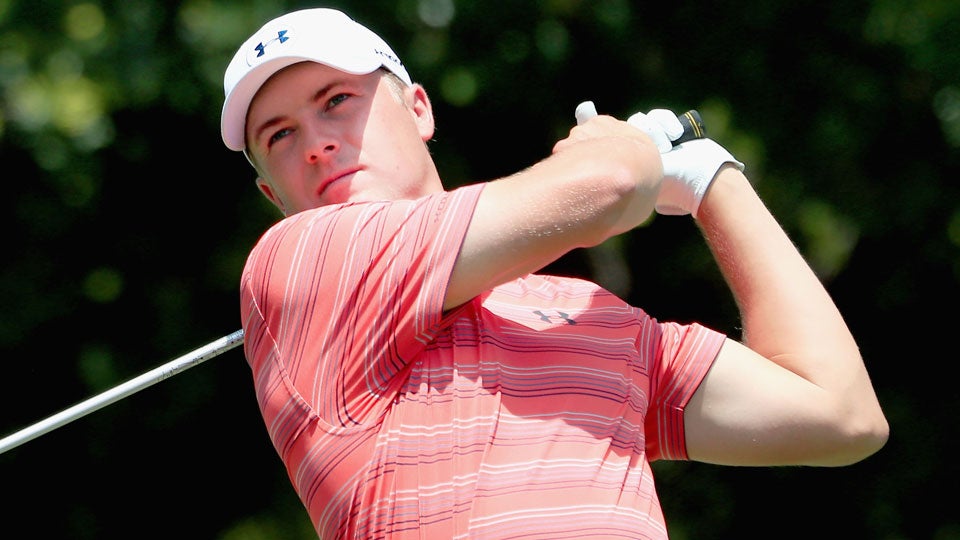 Jordan Spieth is looking to rebound from a disappointing finish at the Byron Nelson last week.
Getty Images

FORT WORTH, Texas (AP) — Bryce Molder would have a magical number if he could combine his front-nine scores through two days at Colonial into one round.

Bolstered by 11 combined birdies on Nos. 1-9 at Hogan’s Alley, Molder had a one-stroke lead with three holes to play Friday in the Dean & Deluca Invitational when second-round play was suspended because of darkness.

“It kind of tale of two nines even though I didn’t finish the second nine,” Molder said “The first nine was really clean. … Everything was going right.”

At 9 under, Molder was a stroke ahead of Webb Simpson and two in front of second-ranked Jordan Spieth and Patrick Reed. Simpson and Spieth completed their rounds.

Molder was the first-round leader after an opening 64 with six birdies on the front nine. He had five more birdies on that side Friday, which would translate to a 59 – that is the best score ever shot on the PGA Tour.

“You know, I thought about that when I was on No. 6 today,” Molder said. “That was fun. I mean, I wish I could have just turned back around, teed off on No. 1 and just kept going because that side has been really good to me.”

Play was stopped at 8:21 p.m. with 61 of the 121 players still on the course. They will return to complete the second round Saturday morning, scheduled to resume just more than 11 hours after stopping. The third round will be played after the cut is made.

Spieth shot a 66 with four birdies in five holes after turning to the front nine.

Reed had 10 holes left. He has a PGA Tour-high eight top-10 finishes this season.

Molder’s only slip-up was a double bogey at the 441-yard 12th, when he hit his first two shots into the rough and three-putted from 27 feet not long before play was stopped Friday.

In his first round Thursday, Molder was in the first group off the No. 10 tee. He got to his seventh hole before a 75-minute weather delay, then came out to finish the seventh of his nine consecutive pars before all his birdies on the front side.

There were consecutive birdies after starting at No. 1 on Friday, and Molder hit his approach from 188 yards at the difficult fifth hole to 2 feet for another birdie. He chipped in from the front bunker at the par-3 eighth.

Spieth goes into the weekend in contention at home for the second week in a row, and at Colonial for the second year in a row. He tied for second in the 2015 Colonial, one stroke behind Chris Kirk.

The 22-year-old Dallas native was a stroke out of the lead after two rounds last week at the Byron Nelson, and was alone in second going into the final round before a closing 74 that left him tied for 18th.

This week, Spieth said he is much more comfortable with his swing and his game overall midway through the tournament.

“Much better, yeah. I’d say it’s up there close to if I want to have it 100 percent trust by major time. It’s creeping up,” said Spieth, the defending U.S. Open champ playing his third tournament since blowing a five-stroke lead on the back nine when trying to win his second consecutive Masters last month. “Big step up from last week. It’s getting close.”

After starting the second round with a three-putt bogey at the 408-yard 10th, Spieth had a couple of short birdies before another bogey at the 192-yard 16th. His 35-foot downhill putt that he hit at a 90-degree angle picked up speed and went 15 feet past the hole.

His birdie rush after the turn went through Nos. 4 and 5, the 221-yard par 3 followed by the 472-yard hole along the Trinity River that wrap up a difficult trio of holes known as Colonial’s “horrible horseshoe.”

Simpson had 17 consecutive rounds of 70 or higher before an opening 65 at Colonial that he backed up with a round of four birdies and one bogey.

“It was kind of a grind. … I had to get up-and-down a few more times today and guess out of the rough what the ball was going to do into the green,” Simpson said. “But it felt great. Just almost more satisfying today than yesterday because I managed my game.”