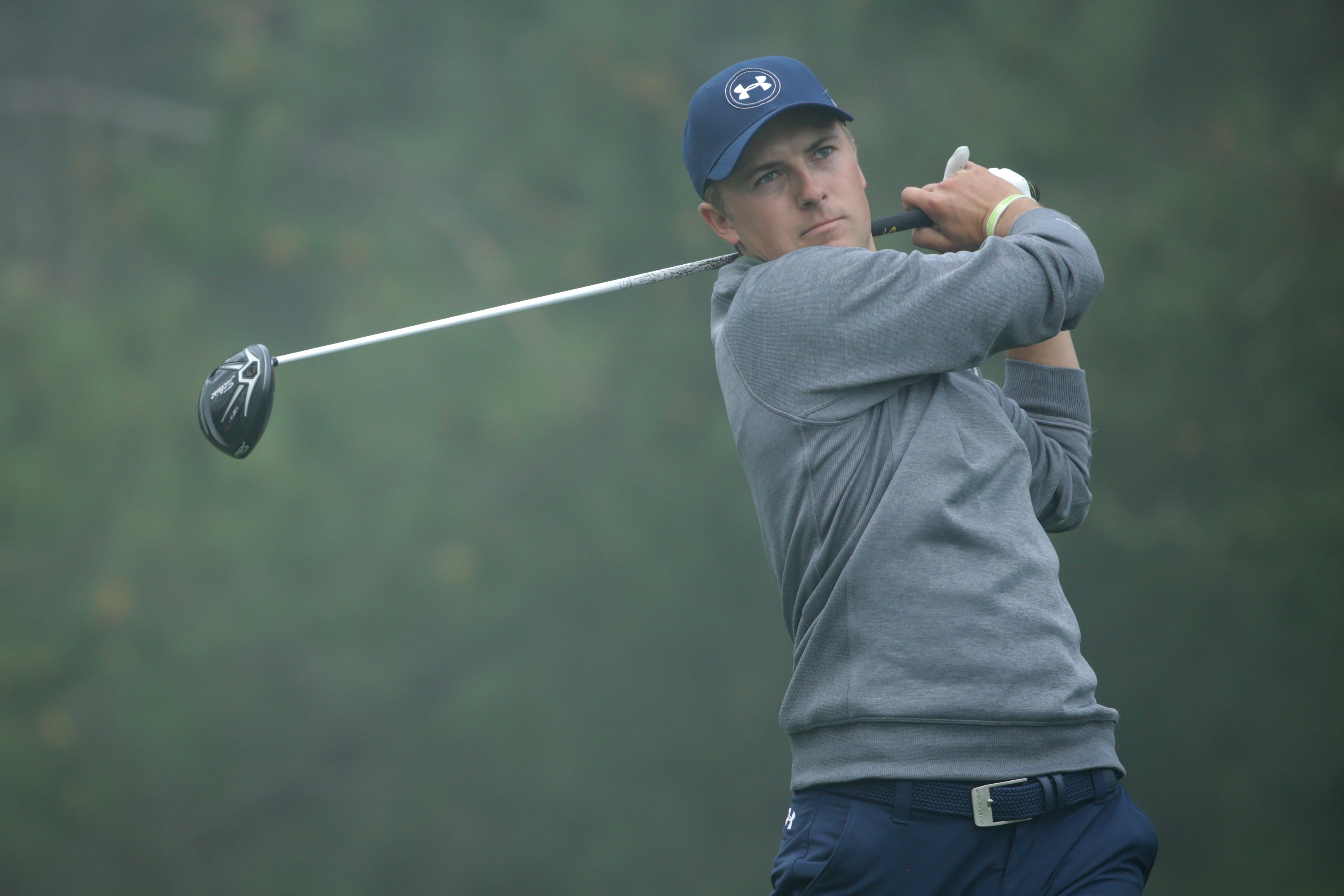 Jordan Spieth battled the fog that descended on the Monterey Peninsula on Friday.
Getty Images

PEBBLE BEACH, Calif. (AP) — Jordan Spieth knew the pin position on the ninth hole at Spyglass Hill as much by memory as by sight, which was a good thing considering the fog creeping across the Monterey Peninsula on Friday.

The crowd behind the green couldn’t see Spieth, only a golf ball that landed behind the flag and spun back 3 feet below the cup. Spieth tapped that in for his eighth birdie of the round and a 7-under 65 that put him atop the leaderboard in the AT&T Pebble Beach Pro-Am.

Derek Fathauer was 8 under for his round at Pebble Beach and tied with Spieth at 10 under. Fathauer had to return Saturday morning to finish his round on the ninth hole. The bigger threat might be Jason Day, the world’s No. 1 player, who was 7 under through 12 holes at Spyglass when play was stopped. Day was at 9 under.

Patrick Reed, who withdrew two weeks ago from the European Tour event in Australia next week because of a respiratory infection, was at 7 under and had one hole to play at Monterey Peninsula.

Spieth mainly was thrilled that he finished just before the horn sounded to suspend play again, this time for fog.

It’s hard to know where anyone stands until three rounds are completed, let alone when only 33 out of 154 players were done with the second round. Spieth only knew that his swing was dialed in and his putter – the most dangerous club in his bag – was coming around.

“I didn’t feel any nerves out there, even though I knew I was toward the lead, just because so much could happen with three courses,” he said. “The first two rounds, it’s been easy. Tomorrow might feel a little different. But in my opinion, I’m at 10 under now. If I can try and just make two (birdies) a side at Pebble Beach each time, and make up for the bogeys with maybe another birdie, it may be good enough.”

The sun, rarely seen this week, is supposed to be make an appearance this weekend. Spieth and Day will play Pebble the final two rounds, and it typically is the easiest when the weather is benign.

What helped Spieth was going off in the third group at Spyglass and having what he considers the best greens on the rotation.

He picked up birdies on both par 3s on the back nine, had a two-putt birdie on a par 5 and made the turn in 4 under to take the lead. Then, he started to get hot with the putter. Spieth rolled in a 12-footer on No. 2, a 25-footer on No. 4 and he saved par with a 15-footer after finding a bunker on the par-3 fifth.

The most flush shot he hit all day might have been with the putter.

Spieth barely reached the front of the green on No. 6, leaving him a 60-foot putt up the hill on a soft, spongy green, Dustin Johnson was right next to him after his approach pitched 3 feet from the hole and rolled all the way back.

Johnson hit his putt so hard that he said, “I thought it was going into the crowd.”

It was still 5 feet short.

Spieth followed with what he thinks might be the hardest he ever swung a putter, and it stopped a few inches from going in. He wasn’t so fortunate from the front of the eighth green, a similar putt up a ridge that he left 15 feet short. It led to his only bogey.

That birdie on the ninth was a good way to finish. Spieth had to wait to see how Day finished at Spyglass Hill. That was the mostly likely the only chance of anyone catching him going into the weekend.

Day’s fortunes turned on the par-5 seventh, which began a streak of four straight birdies. Only the fog delay stopped him.

Seung-Yul Noh was at 7 under with five holes, including a par 5, still to play at Pebble Beach. Pat Perez, who had to withdraw last week when he felt his surgically repaired shoulder acting up, was at 6 under at Monterey Peninsula with the par-3 ninth and its devilish green still to play.

A pair of two-time Pebble winners were still in the mix. Brandt Snedeker was at 5 under with four holes remaining at Spyglass, while Johnson shot 69 and was at 4-under 139 heading to Pebble Beach with Spieth.

Spieth will not tee off until noon, with plenty of players and footprints ahead of him.

DIVOTS: Spieth and country singer Jake Owen were atop the leaderboard in the pro-am. Owen holed a 40-foot putt on the third hole, raising the putter in a pose made famous by Jack Nicklaus. … Phil Mickelson had three birdies and three bogeys in his round of Spyglass, leaving him at least nine shots out of the lead. … Torrey Pines winner Jon Rahm ran off six straight birdies through the seventh hole at Pebble Beach. He played the rest of the way with 10 pars and a bogey and shot 67. He was at 4 under.