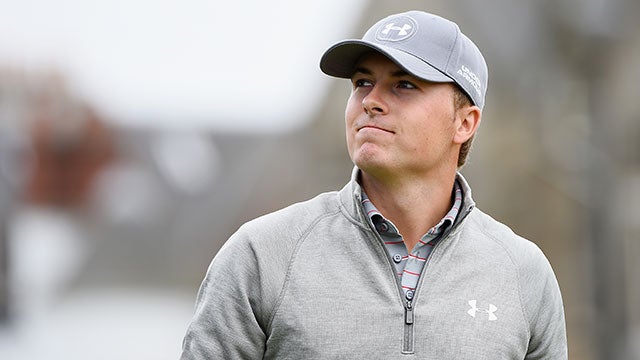 Jordan Spieth walks the Old Course during his Tuesday practice round.
Getty Images

Jordan Spieth’s toughest potential rival at St. Andrews, where he will try to win the 144th British Open and the third leg of an unprecedented calendar year Grand Slam starting Thursday, was thought to be a composite character.

Call him Rory McOosthuizen. Louis Oosthuizen won the 2010 Open at St. Andrews by seven shots over Lee Westwood, and nearly won the 2012 Masters and last month’s U.S. Open. Rory McIlroy shot a record-tying 63 at the 2010 Open before falling back into a tie for third.

Alas, last week McIlroy announced he had ruptured a ligament in his ankle while playing soccer. Two days later the world No. 1 (for now) said the injury would knock him out of the Open, making him the first defending champion no-show since Ben Hogan in 1954. It had just become that much less improbable for Spieth to become the only player other than Hogan (in 1953) to win the Masters, U.S. Open and British Open in one year.

“Whenever I’m inside the ropes or I’m working on my game, it’s not hard to forget about [the buzz surrounding a possible Grand Slam],” Spieth said from the John Deere Classic last week, where he prevailed on the second hole of a playoff for his fourth title of the year. “And then [I am] just kind of staying off my phone a little bit and using it less and less. I don’t think it hurts me with the chatter, but I don’t think there’s any reason to pay attention to it, given that I haven’t for the first half of this year, and it’s gone pretty well.”

Pretty well? Coming into the Deere, Spieth had racked up three wins, three seconds and 10 top-10s in 17 starts, which added up to $8 million in prize money and put the young Texan somewhere in the middle third of a season for the ages. In winning the U.S. Open at Chambers Bay he became only the sixth player since 1934 to capture the season’s first two majors. Spieth has done so much, so fast. What’s next? Perhaps we’ll find out that in his spare time at the Deere he developed a new strain of drought-resistant wheat that will end world hunger and fix the Chambers Bay greens.

Part of the Spieth mystique is that he dominates while not looking very dominant. As Branden Grace, Spieth’s playing partner for the final round at Chambers, put it, “To be honest, he never hit the ball that great on the first nine holes. He struggled around the tee, but he’d get it around. He hit the green, took the bogeys out of play, took the pars, headed forward.” America’s best young player is not known for show-stopping drives or long irons (McIlroy), laser-like approaches (Woods in his prime), or crazy recovery shots (Phil Mickelson, Patrick Reed). No, Spieth just pours in clutch putts (also Woods) and refuses to beat himself (Jack Nicklaus).

Woods, incidentally, shot an opening-round 66 on the way to a 32nd place finish at the Greenbrier Classic, which wasn’t bad for the then-220th ranked player in the world. He has won two Opens at St. Andrews, in 2000 and ’05. Could he be poised for a long-awaited comeback? Only if you believe in miracles. Other threats to Spieth: Grace? Maybe. Resurgent Englishman Paul Casey, who lost a playoff to Bubba Watson at the recent Travelers Championship? Perhaps. Henrik Stenson, who tied for third at the 2010 Open, is usually in the mix. Watson (Bubba) would seem to fit the profile of Old Course winners—see: 1995 champion golfer John Daly—but his poor Open record says otherwise.

Which brings us back to Spieth.

“It’s remarkable how good a player he is,” Billy Horschel, an avowed Spieth fan, said recently. “I don’t see him letting off the gas pedal anytime soon, so I think we all need to buckle up and get going to catch him.”

Spieth won’t be easily caught, though. He’s on a trajectory we haven’t seen since Woods circa 2000, which means he is improving even as he wins.

“There’s certainly things that I can improve on from this week,” he said at the U.S. Open. “I can strike the ball better than I did this week. I can get more positive. I can improve in all aspects of my game. I believe that.”

Remember the kid who took the lead into the weekend at the 2014 Farmers Insurance Open at Torrey Pines—he dusted playing partner Woods by nine strokes over the first 36 holes—only to cough up a pair of 75s amid an on-course pity party? Spieth is no longer that guy. Not even close. Wise beyond his years—he’ll turn 22 on July 27—he is learning at an astronomical rate; in winning the U.S. Open at Chambers he tamed a course where he had shot 83 in his only other round (2010 U.S. Amateur).

Journalistic protocol requires me to mention that Spieth has only a T-36 (last year) and a T-44 (’13) in two British Open starts. But is that even worth mentioning? And is this the Summer of Spieth or the start of an era?

Who’s going to beat Spieth if he won’t do it himself?