Jordan Spieth, leading by three, is just 18 holes away from his first British Open title

SOUTHPORT, England — Where do we begin?

For starters, if you didn’t shoot under par on Saturday at Royal Birkdale, you might as well head to the nearest airport. A565 to Liverpool or Manchester.

You won’t see Jordan Spieth there. He’s 18 holes away from winning the third leg of the career grand slam.

On a day when nearly everyone in the field went low — including Branden Grace’s historically low 62 — the 23-year-old Spieth is still the man to beat at the 146th British Open. Spieth shot a “stress-free” (his words) five-under 65 and is 11 under for the week. He’s three shots clear of playing partner Matt Kuchar, who was two back to begin the day.

This is the fifth time Spieth has held the 54-hole lead at a major but the first time he’ll be in the final Sunday pairing at a major since the 2016 Masters, when he lost the lead, and tournament, with a triple-bogey 7 on the 12th hole at Augusta National.

“I think I’m in a position where it can be very advantageous, just everything I’ve gone through: the good, the bad, and everything in the middle,” he said. “I understand that leads can be squandered quickly, and I also understand how you can keep on rolling on one. So it was a humbling experience that I thought at the time could serve me well going forward. And if I don’t win tomorrow, it has nothing to do with that.” Friday’s rain and wind kept the field bunched. But conditions were ideal on moving day. No rain coats, oversized umbrellas or ponchos — or at least not until the final hour of play, when a quick shower rolled in. Before that, there was a soothing breeze, sleeveless shirts and thirsty British golf fans.

The grounds were buzzing. Spectator village looked like the floor of an Adele concert. Twenty-four hours earlier, in that same area, golf fans took cover to escape the rain. On Saturday they laid blankets on the ground and sunbathed.

Shaun Norris, a 35-year-old South African, was the first man out this morning. He shot 65, a harbinger of more low scores to come. Jim “Bones” Mackay, Phil Mickelson’s long-time caddie-turned-on-course reporter this week, sensed it, too. He said on the telecast that 62 was very much in play. Hours later Grace signed for 62—the lowest round in men’s major championship history.

The boards bled red. Dustin Johnson: 64. Henrik Stenson: 65. Rickie Fowler: 67. And on and on. Forty-three of 62 players posted under-par scores on Saturday.

Spieth, teeing off after Grace set the pace, made the turn in three-under 31, the same as Kuchar, who despite playing well was unable to gain any ground. He inched closer with a birdie on the par-3 14th to get to eight under, one back. They both birdied 15, but Kuchar suffered a disastrous double bogey on the par-4 16th and fell three behind. His drive found a pot bunker, he blasted out back into the fairway and three-putted. He got one stroke back with a birdie on 17, but Spieth punctuated his round with a long birdie on 18, even though he was frustrated with his approach shot.

“I thought it was going to be in the bunker, but I guess it hit right on the mounds there and had enough spin to be able to check,” he said. “When I got up to the green I was happily shocked. And then from there I thought this is where I normally capitalize and I kind of make a scrappy birdie. And even though I had missed quite a few putts from that range, and I had a lot of them today, that one just felt good looking at it. I could cast it out a little bit, and put the right speed on with a few feet to go, it was going to go in and it was a good feeling.”

Spieth said his goal this morning was four under. The birdie on 18 got him to five.

He cards his second bogey-free 65 of the week and leads #TheOpen by 3. pic.twitter.com/zdmMa7DZjx

Grace’s 62 broke the long-standing low-scoring mark of 63 in the majors. Johnny Miller shot the first, a final-round eight-under 63 to win the 1973 U.S. Open at Oakmont. It’s been matched 30 times since then, most recently by Justin Thomas, who shot 63 at the U.S. Open at Erin Hills last month, which set the major record for relation to par at nine under.

Grace, a 29-year-old South African still in search of his first major title, didn’t know how good his round was on Saturday, even after the final putt had dropped. His caddie, Zack Rasego, had to tell him.

“Zack came up and said, ‘You’re in the history books,'” Grace said. “And I was like, ‘What are you talking about?’ So obviously now it makes the day even sweeter.”

Grace made the turn in 29, putting #62Watch on Twitter’s radar. He added birdies on 14, 16 and 17 then parred 18. He started the day four over and 10 shots off the lead but vaulted up the leaderboard in the afternoon. 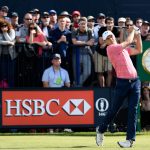 You may also like British Open 2017 tee times, pairings for Sunday’s final round

“Today was one of those days where we had the conditions,” Grace said. “Just trying to shoot a number to try to get myself back in there and have a decent finish for the week. Obviously now the mindset changed a bit.

Austin Connelly and Brooks Koepka are tied for third at five under, with Grace and Hideki Matsuyama tied for fifth and seven back. Plenty of big names are on the first page of the leaderboard, but it still might be too little too late. Johnson and Stenson are tied for seventh but sit eight off the lead, and Rory McIlroy, who started the day hot but cooled off late, is nine back.

They’re all chasing one man.

With a win Sunday, Spieth would become just the second player to notch three legs of the career grand slam before turning 24. The other? Jack Nicklaus.

“I wouldn’t rather be in any other position than where we’re at,” Spieth said. “And we have an opportunity to have a really special day on the golf course tomorrow.”