Jordan Spieth Hasn’t Matched Spectacular ’15, but His Good Might Be Good Enough 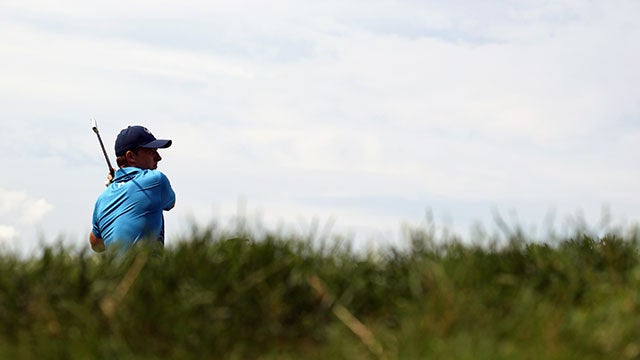 Jordan Spieth of the United States plays his shot from the 12th tee during the first round of the 2016 PGA Championship at Baltusrol Golf Club.
Getty Images

SPRINGFIELD, N.J. – A year ago, the hysteria surrounding Jordan Spieth was at a fever pitch. He’d won two majors, and amid talk of a Spieth Slam he’d nearly won a third straight at the British Open at St. Andrews. He was the clear No. 1. It was his world; everyone else was just watching him on the Late Show with Stephen Colbert.

Today? Not so much.

Oh, Spieth still has fans. They were out in force as he shot an even-par 70 at the 98th PGA Championship at steamy Baltusrol on Thursday. But the hysteria around the young Texan, who is five off the lead, was a result of his group as a whole—he played with Sergio Garcia (71) and Bubba Watson (71)—more than anything he’s done lately.

Today it’s about Henrik Stenson, who shot 20 under at the British Open at Troon to leave everyone but Phil Mickelson far behind. Or it’s all about Dustin Johnson, who won the U.S. Open last month despite crossing the USGA rules police. They are the Pokemon Go characters of golf, in addition to Jason Day and Mickelson. Spieth, who admits he hasn’t yet reached his own goals this season—in addition to falling short of others’ expectations—is just the latest example of how quickly our attention strays.

He hasn’t won a major since the 2015 U.S. Open. Heavens! He hasn’t won on Tour since the Dean & Deluca Invitational at Colonial back in May. Oh, dear! About the most exciting thing Spieth has done in the last month or so is turn 23 on Wednesday. (Fans at Baltusrol serenaded him with Happy Birthday as he signed autographs.)

And yet after a two-birdie, one double-bogey round Thursday he’s right in this PGA. If he has a low round Friday to get into contention, the joke will be on us. “I struck the ball beautifully today, the way I have been,” said Spieth, who tied for third at the WGC-Bridgestone before struggling to a 30th-place finish at the British Open. “One bad tee shot [on the seventh hole] caused the double bogey, and the rest of it was on the greens, just looking to match the line and speed up. I left quite a few short, which a lot of people did. They looked glassy and then they didn’t putt that way.”

There’s been so much talk this year about Spieth being set up for a fall. There was no way that he could live up to his banner 2015, with the two majors, five wins overall, FedEx Cup title, $12 million-plus in on-course earnings. But even amid the predictions of doom and gloom for the American boy wonder—who bristled at the negative questions from the press at the British Open—this season looks pretty good so far. Spieth has two wins, six top-10s, $4.6 million in 16 starts, and nearly won a second straight Masters.

He’s done much of this while looking fidgety, fighting slow play, getting mad at himself, and constantly chirping to his caddie, Michael Greller.

This, Spieth admits, must change.

“Golf is a game where you smack it, go up to the next one and smack it again and you count it up at the end,” he said earlier this week. “Simplifying things has really been the trend recently. It’s really helped me. Akron, I didn’t have my best stuff and we ended up third. The Open Championship, I hit the ball extremely well and just had an off putting week. I feel like I’m actually trending very much in the right direction right now.”

As for his game plan at Baltusrol, where rain is expected Friday, he said after his 70 he hopes to stay patient and to keep hitting greens in regulation. (He hit 14 Thursday.)

“That’s really solid at a major championship,” he said, “let alone at Baltusrol.”

There’s a lot of golf left this week, and a lot remaining this season. Spieth may yet turn solid into special; just don’t ask him to revisit spectacular. That was last year.