Jordan Spieth Completed One of the Greatest Seasons Ever at PGA 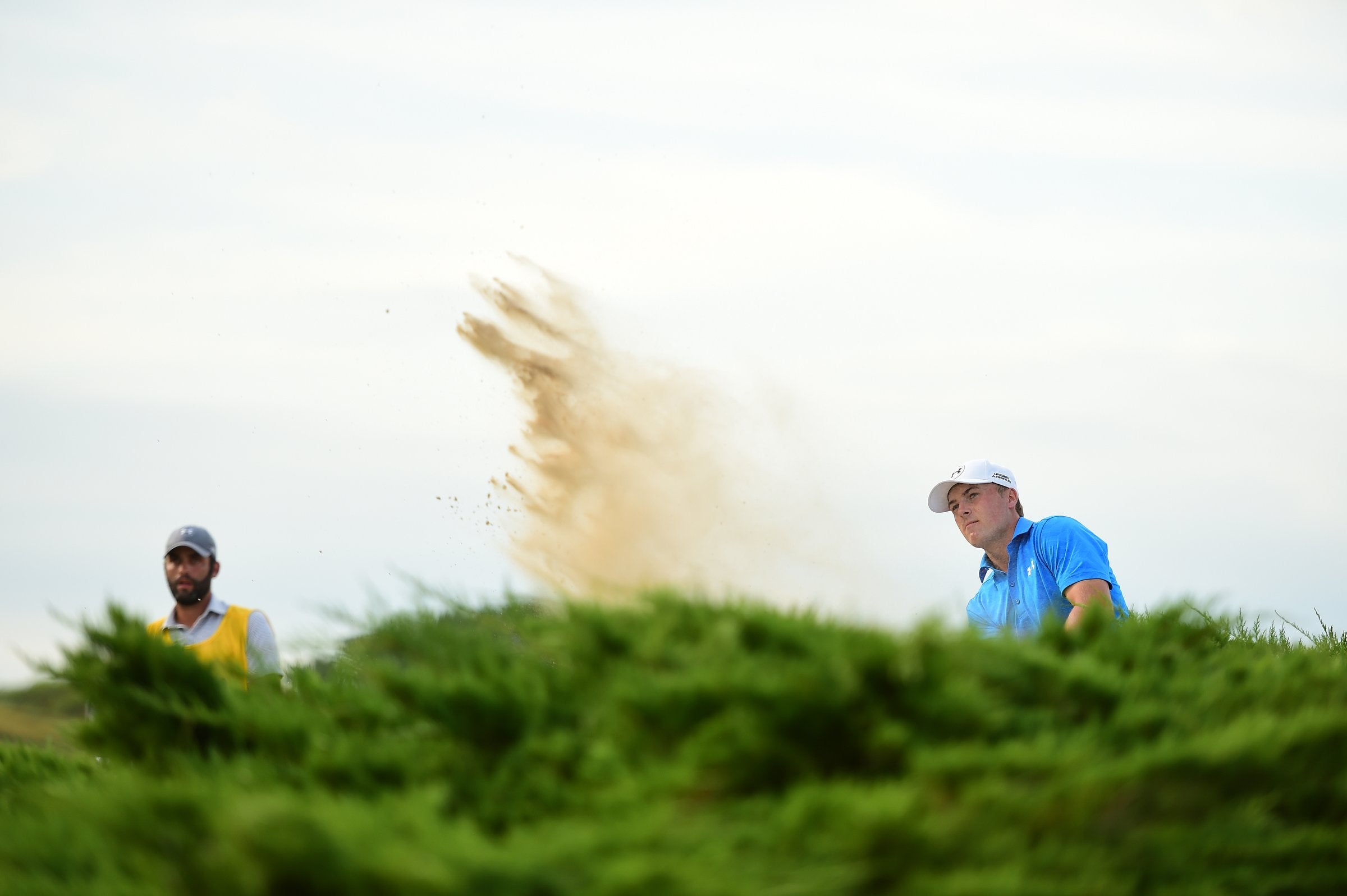 Jordan Spieth chips out of a bunker on the 15th hole during the final round of the PGA Championship at Whistling Straits.
Robert Beck / SI

We are a day away,” said the dapper man, “from perhaps crowning the greatest year in major championship history.”

The dapper man was on television, but that didn’t stop me from talking back. “Come on, Brandel, get a grip. Tiger won three majors in 2000, and he won them by a combined margin of 24 strokes.”

I waited for a rebuttal. Nothing.

I only mention it to remind everyone how close Jordan Spieth was, after the third round of the PGA Championship, to carving his likeness onto golf’s Mount Rushmore. Having already won this year’s Masters and U.S. Open, and having finished a measly stroke shy of an Open Championship playoff won by Zach Johnson, Spieth was poised to accomplish, at the tender age of 22, what Woods achieved at age 24 and Ben Hogan achieved at 40 — a single-season haul of three major titles.

Jason Day’s major-tournament-record of 20-under par, it turned out, was too big a mountain for Spieth to climb. Trailing by two after three rounds, Spieth shot a more-than-respectable 68 on Sunday, but he missed opportunities, failed to rattle the front-runner…and finished second by three. “We play a lot of golf, and we’ve played a lot of major championship rounds together,” Spieth said of Day, “and that was the best I’ve ever seen him play.”

Ironically, it was Day who cried into a towel on the final green, spilling emotions stored up from a hardscrabble childhood in Australia and so many close calls in majors. This year alone, the 27-year-old struggled to a vertigo-plagued T9 in the U.S. Open at Chambers Bay and then left a birdie putt in the jaws on the 72nd hole at St. Andrews, costing him a spot in the Open playoff. “In previous finishes, I wasn’t the last man standing, and it was so frustrating,” Day said on Sunday. “There were a few times where I had to pull myself back in and say, It’s not over, you’ve got to keep grinding, keep fighting. And once I did that, I kind of pulled myself back and started hitting the quality shots I needed to hit.”

(Said the dapper man: “I really didn’t see this coming. What [Day] did this week was just astonishing.”)

Day’s play satisfied something in our souls, but we mustn’t let his triumph obscure what Spieth accomplished in 2015’s four majors. The University of Texas alum compiled a record of two wins and two seconds and beat his closest pursuer in cumulative score, Day, by 19 strokes. What’s more, Spieth’s combined-majors score of 1,090 broke Woods’s record of 1,095, set in his three-win season of 2000, and also edged Vintage Tiger, relative to par, 54-under to 53-under. Spieth joins Woods, Jack Nicklaus and Rickie Fowler as the only players to finish in the top five at all four majors in a single season. “It was amazing,” Spieth said afterwards. “You only get four a year, so to have an opportunity to win all of them is so cool.”

More stats? Spieth’s runner-up finish at Whistling Straits, along with 26-year-old superstar Rory McIlroy’s taking of 17th after a long layoff due to a serious ankle injury, elevated the younger of the two youths to No. 1 in the Official World Golf Rankings — an achievement that Spieth charmingly described as one of his “lifelong” goals. “That will never be taken away from me now,” he said. “I’ll always be a No. 1 player in the world.” Please note that he didn’t say the No. 1 player. Spieth doesn’t brag.

I avoided the TV on Sunday evening, so I don’t know what the dapper man had to say about all this. I’m guessing he mentioned that Spieth is the first golfer to win more than a million dollars for finishing second in a tournament. And he probably threw in how a stroke difference at the British Open might have delivered Spieth his third major of the year, putting him in the aforementioned select company of Woods, Nicklaus, and Hogan — the third of whom couldn’t try for the Grand Slam in 1953 because that year the PGA was played the same week as the British Open. (Note to self: Ponder the silliness of apples-to-oranges comparisons.)

“You can look at it two different ways,” Spieth said, refusing to appear dejected. “You can look at it as four shots shy of the Grand Slam, or you can look at it where maybe one putt and I would only have one major this year.” He was referring, of course, to the finish at Chambers Bay, where Dustin Johnson missed an eagle putt for victory and then missed again on a putt that would have forced an 18-hole playoff.

Spieth didn’t dwell on that, and who could blame him. “I’m tired right now,” he said at day’s end. “I left it all out there.” But there was a gleam in his eye as he added, “I hope to have a season like this one, at the biggest stages, again.”

And there will be an “again.” That’s something on which the dapper man and I wholeheartedly agree.