Jordan Spieth started the year with no status and reached the Tour Championship.
Getty Images

AUGUSTA, Ga. – On Thursday evening, as the first day of the Masters gave way to night, two golfers remained on the driving range at Augusta National.

On the far right was Jordan Spieth. On the far left: Tiger Woods.

A day later, Spieth was inching closer to Tiger — in the golf landscape, and in the Masters record book. He shot a second-round 66 to back up his first-round 64. You just don’t go around Augusta National in the first two days of the Masters like that. Nobody ever had. After Spieth walked off the 18th green, his brother, Steven, looked at the leader board.

“To be up three or four going into the weekend is incredible,” he said. “I don’t know how to put it into words, honestly.”

He doesn’t have to put it into words, because by the time play ended on Friday, Jordan was five strokes clear of the field. He needs binoculars to see everybody else.

Charley “Gosh, second place doesn’t sound so bad!” Hoffman is at nine under. Justin Rose, probably the biggest threat to Spieth, trails by a touchdown. Dustin Johnson is tied with Rose at seven under after a round that featured a Masters record three eagles, three birdies, two bogeys and a double. (We should really use a smaller font size for this paragraph, since everything in it will probably just be fine print come Sunday.) 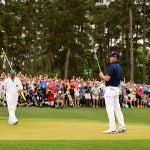 This is Spieth’s tournament to lose, and U.S. golf may soon be his to own. Last year, in his first Masters appearance, Spieth tied for second. Now a year wiser at 21, he’s in line to become the second-youngest champion in the 79-year history of the Masters, behind only Woods. In the last 30 years, only two American golfers have been this good this young: Woods and Phil Mickelson.

Even casual fans know the early backstory on Woods and Mickelson. Tiger was introduced to the game by his dad and became the ultimate prodigy, a Mozart of the links. Phil, a natural righty, learned to play left-handed because he was mirroring his dad’s swing as a tyke.

Spieth was a phenom of a different sort. When he speaks at junior golf clinics, he tells the kids: “Don’t focus on golf.”

Yes, you read that right. He tells them to play team sports, too, because as his mom, Chris, says, “You need to learn how to win as a team — be a team member.”

Sure, Jordan was playing very well from a young age. He knew he wanted this. But as Chris says, “If anything, we tried to hold him back. Every age level, he wanted to play at the higher age groups. When he was nine and 10, and he was playing in the North Texas Junior PGA, they carried their clubs for nine holes. He goes, ‘I’m not going out there to play nine holes. Put me in the upper age group.’”

His skills seem supernatural, but his path felt natural. He played baseball through seventh grade and basketball through eighth, which was around the time his parents got him his first swing coach. He started working with a trainer before his senior year in high school. He is still dating his high school girlfriend, who followed him around the course on Friday.

At 21, Spieth has already figured some things out that a lot of 31-year-olds on Tour are still learning. During practice rounds early in the week he picked the brain of two-time Masters champion Ben Crenshaw about how to putt from certain spots on Augusta’s treacherous greens. He also did a lot of listening. He is staying in the same house he stayed in last year, with his girlfriend, his parents, his brother and his grandfather. The high school buddies and the rest of the crew are in other houses, and when Jordan wants to see them, he goes to see them. They don’t come to him. That way, he isn’t hosting, and he doesn’t have to worry about his house feeling like a golf convention. When he wants to go to bed, he does. He can play pool and Ping Pong with his brother, instead of entertaining people. Nobody turns on Golf Channel until Jordan has called it a night.

When Spieth lost in a playoff at the Shell Houston Open last week, he was at least pleased that his putts were a little short. That meant his speed would be just right on Augusta’s lightning-quick greens. That says a lot about his priorities. The best 21-year-old golfers in North America are usually in college, and the youngest members of the PGA Tour are usually concerned, primarily, with earning nice checks and keeping their Tour cards. Spieth builds his schedule around the majors.

Anybody can talk about “handling adversity” but Spieth has already shown he can do it. He has wanted to win the Masters ever since he knew there was a Masters, and last year, he nearly did. He had the lead at eight under with 11 holes to play, but finished at five under, three shots back of Bubba Watson.

You may wonder: How did Jordan get over the devastation? His family members reply with a question of their own: What devastation? Asked about her son’s emotional hangover, Chris says, “He doesn’t let anything hang him over.”

The most amazing thing about Spieth’s performance: It doesn’t seem that amazing. He doesn’t overpower a golf course with monster drives like Watson and other long hitters do. In his first two rounds, he has not made an eagle or holed any long putts or pitch shots. But he has only made one bogey. The long, downhill 10th hole is historically one of the toughest at Augusta; Spieth birdied it both days.

On Friday, Spieth did what great golfers do when they are in command at Augusta: He birdied all the par-5s and didn’t make mistakes. He bogeyed the par-5 15th on Thursday, and he said when he got back to Firethorn on Friday, “No part of me was going to lay up.” But his caddie, Michael Greller, knew he was already well ahead of the field and didn’t need to be aggressive. Greller advised Spieth to lay up, and Spieth complied, sticking a wedge to eight feet and holing the putt.

He was told that his 14-under 130 is the lowest 36-hole score in Masters history.

“Any time you can set a record here is pretty awesome,” he said.

Something tells me it won’t be the last one.