AUSTIN, Texas (AP) — Dustin Johnson and Phil Mickelson had another easy time and remain undefeated in the Match Play.

The biggest battle is the wind.

Gusts upward of 30 mph are wreaking havoc across Austin Country Club. On the 12th hole, Daniel Berger hit into the water to seemingly lose the hole. Mickelson was just right of the green, and it was so fast that he chipped into the water. They halved the hole, but Mickelson won the match, 5 and 4.

Johnson, the No. 1 seed, was 4 up with four to play against Martin Kaymer and nearly drove the green with a 380-yard drive. His flip wedge bounded over the green and he lost the hole. He still won, 4 and 3. Rory McIlroy has never had a stranger week at the Match Play.

He lost to four straight birdies by Soren Kjeldsen on Wednesday. He didn’t play on Thursday when Gary Woodland withdrew for a personal matter. And it won’t matter how McIlroy plays on Friday, because he’ll be out of the tournament as the No. 2 seed.

Kjeldsen, the No. 62 seed in the tournament, had no trouble with Emiliano Grillo in a 4-and-3 victory. And because Kjeldsen was to play Woodland in the final day of round-robin play, the Dane is assured of going 3-0 and advancing out of the group.

About the only thing left for McIlroy is to decide whether he will enter the Shell Houston Open next week. He has until 5 p.m. to decide. Because of a rib injury that kept him out seven weeks, McIlroy has played only 14 competitive rounds this year. 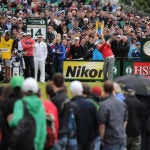 By losing their matches Thursday, they were among at least eight players mathematically eliminated from winning their group and advancing to the knockout stage on the weekend.

Others to be eliminated were Francesco Molinari, Scott Piercy, Jason Dufner and Patrick Reed. They still have to play Friday because their matches could have a bearing on who wins the group.

But when Molinari withdrew after his second straight loss with a wrist injury, that also eliminated Bernd Wiesberger and Thongchai Jaidee. Molinari was to play Alex Noren on Friday, so Noren now is guaranteed to be 3-0.

Jason Day and Gary Woodland previously withdrew from the tournament.

Day’s mother is having lung cancer surgery on Friday. Woodland’s departure was described by his agent, Mark Steinberg, only as a ”personal family matter.” No other details were expected.