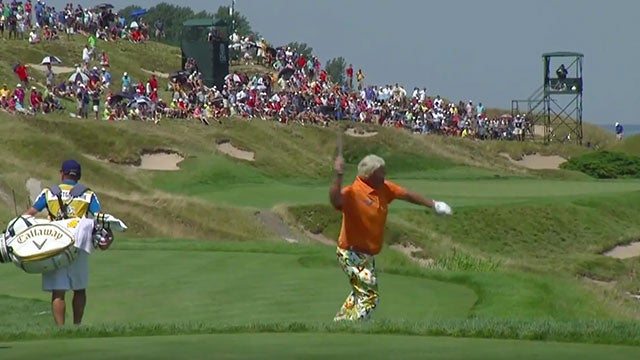 John Daly launched an iron into Lake Michigan after carding a 10 on a par-3.
YouTube

John Daly finished his opening round with a 1-over par 73. Not great, but not terrible. In his second round, things shifted to terrible. Entering the par-3 7th even par for the day, Daly piped not one, not two, but three tee shots into Lake Michigan off the tee. After his seventh shot landed safely on the far left side of the green, Daly took a few steps and then launched his iron off the cliff and into the lake. He’d then three-putt for a smooth 10.

The 221-yard hole is playing as the seventh toughest on the course so far for the tournament. For Daly, it is No. 1.

To recap Friday’s action so far, Phil Mickelson slid down a hill on his rump like a small child, Tiger Woods made back to back birdies and Jordan Spieth and Rory McIlroy traded holeouts with Aaron Rodgers watching. This is major.

Luckily, a boy was chilling on a boat right off the coast and got a souvenir.