COLUMBUS, Ohio — Twenty-five years ago, the legend of John Daly was born. He was a late addition to the 1991 PGA Championship field as the ninth alternate, drove most of the night to get from his Arkansas home to Crooked Stick in Indianapolis and then, as a player not known for much other than his massive drives, won the tournament without so much as a practice round.

History didn’t repeat itself this week but was clearly considering it. Daly was temporarily stranded in Minneapolis after the Champions Tour event there due to the computer glitches that shut down a certain airline.

“I got Delta’d like everybody else, that’s what we’re calling it,” Daly joked Thursday afternoon after shooting an even-par 70 at Scioto Country Club in the U.S. Senior Open’s first round. Vijay Singh shot the low round in the morning half of the field, a 4-under 66 that was two strokes better than Jeff Gallagher, Miguel Angel Jimenez and Michael Allen.

Daly is known for his dislike — okay, fear — of flying. That’s why he usually travels the country in his luxury RV. The irony of this Delta Airlines shutdown episode was not lost on Long John.

“It’s amazing, it’s the first time I’ve flown in the U.S. in I don’t know how long because I always take my bus and here we go,” Daly said. “That’s why I like driving my bus everywhere. Luckily there wasn’t a pro-am in this. So even if [the delay] went to Wednesday, I could have just driven. You have your ticket, you think they’re going to get it fixed in time and then you just kind of hold on.”

He quickly lost patience with Delta, as did many other passengers. So he drove his bus, as he calls it, home to Arkansas (he lives in Dardenelle), then caught a flight from Little Rock to Columbus. No, not Delta. “I took Southwest, they’re always reliable,” Daly said. “It was easy to get here Wednesday.”

His luggage and his clubs even showed up. (Delta, please take note.) Daly said he never even got a chance to check his bags in Minneapolis because his flight was canceled. “It’s just one of those things,” he said. 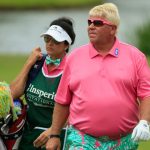 You may also like John Daly: Still a Fan Favorite

Maybe this system works for him. If you had held a contest to predict which player in the Senior Open field was most likely to par his first 11 holes, Daly would’ve gotten fewer votes than Carly Fiorina. Scioto features narrow, tree-lined fairways, thick rough and heavily bunkered greens that are extremely undulating. It’s one tough track, one that didn’t figure to suit the long-but-often-wild-hitting Daly.

“It was pretty cool to play pretty much 16 holes bogey-free,” said Daly, who got to two under par before he bogeyed his 15th hole, the par-5 sixth. I hit the ball decent, made a few putts, nothing special.”

Ignore the math error. It’s always tougher to remember a round when you tee off at No. 10 instead of No. 1.  He does recall No. 8. It’s normally a par 5 but it is shortened to a par 4 this week. Jack Nicklaus on Wednesday recalled one of his Scioto highlights of making a double eagle on that hole when he was a young golfer, probably with a 3-wood, he said, but he didn’t really remember. At the 8th, Daly “just kind of yanked a 6-iron out of the rough” left and into the water and made a double bogey. The 8th features a green with a large pond on the left — it used to have a moat surrounding it but Nicklaus convinced the membership to finally remove that gimmicky design contrivance. It’s still a tough hole, as Daly proved.

“It’s a great golf course, I guess that’s why it’s in the top hundred,” Daly said. “I know we’re not playing it all the way back on a couple of holes but we’re playing it pretty long.”

Daly, who turned 50 in April and is technically a tour rookie, was not overly familiar with Scioto’s tie-in to Nicklaus, who grew up on this course, and said he hasn’t had a chance to check out the historical photos and artifacts in the clubhouse yet since he was a late arrival.

“I knew this is where Jack started playing,” Daly said. “No wonder he’s so damn good.”

While Daly was a surprise early contender, the often press-reticent Singh was the surprise quote of the day talking about Scioto. “Anytime Jack loves a golf course,” Singh said, “it must be good.”

At Scioto, nobody will disagree.