John Daly Explains the Difference Between Him and Jason Day 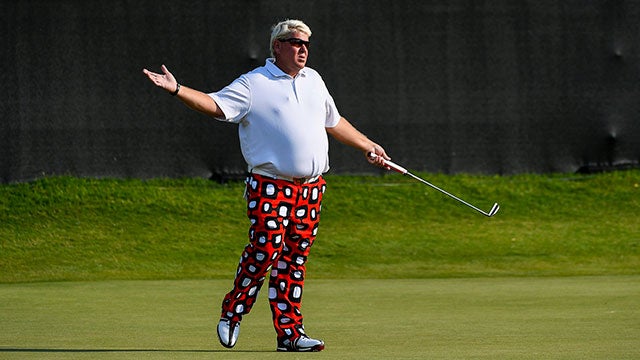 John Daly reacts after making an eagle on the 18th hole during the final round of the PGA TOUR Champions Regions Tradition at Greystone Golf & Country Club on May 22, 2016 in Birmingham, Alabama.
Getty Images

John Daly and Jason Day have the same initials, but that’s pretty much where the similarities end.

Speaking before the Senior PGA Championship – Daly’s first PGA Tour Champions major – the 50-year-old used World No. 1 Day as an example of the differences between him and the Tour’s current crop of young talent.

“I worked just as hard as anybody else did,” Daly said. “Otherwise, I probably wouldn’t have done the things that I did. My problem was, when I did win, I got lazy. And in the 90’s, I didn’t work as hard. Everything was coming in so fast, money was coming in and it wasn’t the way Jason Day is now. Once he wins, he’s back at it again. He’s working his ass off and wanting to keep winning and winning and winning.

Daly has a point. After his PGA Championship win, Day followed up with five wins in the next nine months.

Daly, on the other hand, seems to have savored his victories a little more. After Daly won the 1995 British Open, he didn’t win another event until 2004.