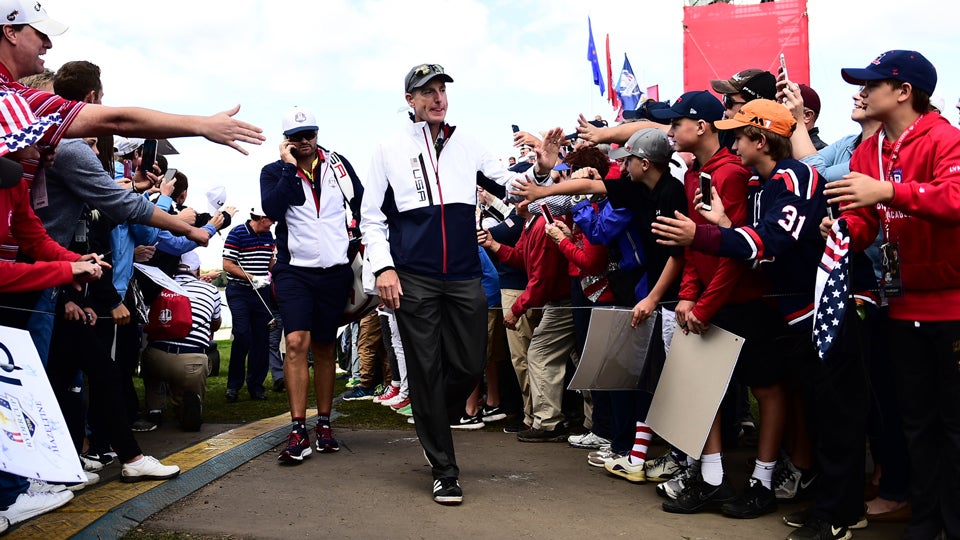 In various ways, Jim Furyk–named today as the U.S. Ryder Cup captain for 2018, when the matches will be played in France for the first time–seems like a totally conventional choice by the PGA of America, working in concert with a committee of leading American players. He’s the traditional age (46). He’s won a major (the 2003 U.S. Open). His father was a PGA of America member, as were the fathers of other Ryder Cup captains, including Arnold Palmer, Curtis Strange and Davis Love.

But none of that should be held against him, and he was an excellent choice. Yes, Fred Couples might have been a much more popular pick with golf fans. Given the success he enjoyed last year at Hazeltine, Love could have been asked to come back for a third stint. Phil Mickelson, also 46, is still trying to make Ryder Cup teams and Tiger Woods, at 41, is too young. Their day is coming. The Ryder Cup Task Force, mocked as it was in certain quarters, didn’t determine that the process of captain selection had to be completely reinvented. Had that been the case, men such as Mike Krzyzewski or Tony Dungy might have been considered. Furyk was hired for the job–it’s not a paying gig–because he is actually ideal for the job.

Furyk has appeared on nine Ryder Cup teams (only Mickelson, with 10, has appeared more). He was only on two winning teams, and his own record is 10-20-4, but, as the saying goes, you learn more from losing than from winning. He bleeds the colors. He’s hyper-articulate, an important quality for a modern Ryder Cup captain when dealing with reporters, sponsors and fancy-pants guests. He’s a tough person, straight-forward and honest, not a game-player, and the players will know where they stand with him. He is also an excellent listener and will seek out the opinions of his players.

His painfully slow playing style suggests someone who is indecisive, but in other areas of his life he has shown a firm belief in staying with what works. He’s had the same caddie, Mike (Fluff) Cowan, for over 18 years. His wife of 16 years, Tabitha, is one of the most-liked wives on Tour. Furyk has never been tempted to change his sui generis swing. He has been a thoughtful member on various PGA Tour committees and boards and on the board of his own charity. He has lived in greater Ponte Vedra for most of his playing career. He’s a stable, reliable person, not at all a hot head, and those are useful qualities in a captain. Also, like Love, he follows other professional sports closely, knows many coaches and managers, and can take lessons from those people and apply them to his Ryder Cup captaincy.

One of the goals of the PGA of America, since the U.S. defeat in Scotland in 2014, was to create a sense of continuity in the captain-selection process. Viewed that way, there really was no news announced today. Furyk, who was an assistant captain to Love at Hazeltine, has been groomed for his job, and his successor is already being groomed.

At the conclusion of the 2014 Ryder Cup, Mickelson made comments, obviously directed at Tom Watson, and the pain on Furyk’s face was palpable. You could see how much he loved the game, loved Ryder Cup play and respected both men. You could see how upset he was at losing again and the conflict he felt. It was all over his face. Then he was asked his position about what Mickelson and Watson had said, and this is how Furyk responded:

“I have a lot of respect for both gentlemen. I’ve known Phil my entire life. Since I was 16, I’ve competed against him. He’s one of my dearest friends on the PGA Tour. And I have a lot of respect for our captain. I know he put his heart and soul in it for two years. He worked his ass off to try to provide what he thought would be the best opportunity for us. I don’t think it’s wise for either one of us to be pitted in the middle of that. I respect both of those gentlemen.

“We all come here and we are trying to win a Ryder Cup together, trying to pull together as 12, as one unit. We’ve fallen short quite a bit. Five of you have already asked me tonight what’s the winning formula and what’s the difference year-in, year-out. If I could put my finger on it, I would have changed this s— a long time ago but we haven’t and we are going to keep searching.”

That, right there, is Furyk. He’ll be a good captain. That doesn’t mean his team will win. But he’ll put together a good team, manage the talent well, and do what coaches are supposed to do: put players in positions where they can succeed.

In the meantime, he should work on his French.