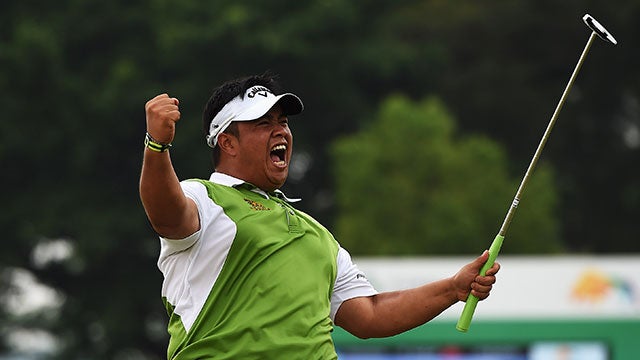 Is Jim Furyk a Hall of Famer? It’s a fascinating question. He’s been as consistently good as anyone ever to play the game … but has he been great enough? A final round 64 to win a 17th Tour title on one of the Tour’s most venerated tracks certainly helps Furyk’s case. Now that he’s off the schneid, it’s easy to imagine a few more victories coming his way, and if Furyk gets to the magic number of 20 — as in career wins — the debate is over.

2. Kiradech Aphibarnrat. His game is now almost as memorable as his name. The talented Thai won a pretty big-time event in China thanks largely to a 71st hole eagle. 3. Olin Browne. I should cover the senior tour more — you get paid in full but only have to do two-thirds of the work!

4. San Francisco golf fans. This week brings an awesome field at the LPGA Swinging Skirts, next week the Match Play is in town and sandwiched in between is the USGA Four-Ball. I wish there was a Google Bus that picked up in Carmel!

5. Jim Furyk. He’s the leader in the clubhouse for best fist-pump of the year. 1. Edoardo Molinari. Unbeknownst to him, his caddie rode in a cart mid-round, which is a two-stroke penalty, so Eddie was DQ’d when he failed to add those two strokes to his score. Golf is the best.

2. Troy Merritt. He squandered the 54-hole lead in Hilton Head with a double bogey on the 12th hole on Sunday. An eagle-par-birdie finish was good for a lot of cheddar and FedEx Cup points, but it’s the wins, or lack thereof, that really matter. 3. Peter Uihlein. Injuries have stalled this mega-talent’s career, but he was in prime position for a win in China. Alas, he played the first 13 holes in 1-over and got run over. Still, it’s good to see him back on the ‘board.

5. Thomas Bjorn. He was the last guy bumped out of the Match Play field. On the bright side, now he doesn’t have to suffer the migraine of trying to decipher the new format.