Jim ‘Bones’ Mackay on his new gig, Phil and preparing for the Open

This Open will be quite different.

Bones, as the golf world knows by now, will be an on-course reporter for NBC and Golf Channel this week, the first of what will be many assignments coming to the long-time looper. He and Mickelson announced the end of their 25-year player-caddie relationship last month, and Mickelson’s brother, Tim, will caddie for him the remainder of the season.

Although this isn’t technically Bones’ debut — he did some reporting at the 2015 RSM Classic at Sea Island — this is a new chapter. He sat down with GOLF.com on Tuesday of Open week to chat about what’s to come.

GOLF.COM: What’s the most nervous you have ever been before an event as a caddie?

BONES: I really didn’t get too nervous as a caddie. There was an occasion in 2006 the week before the Masters. Phil had a seven- or eight-shot lead in Atlanta [at the BellSouth Classic], and sleeping on a big lead, you are assumed to win the event. I felt that was kind of an odd feeling that night and then the next morning, but he ended up winning the tournament by 13 so it all worked out in the end. But I typically don’t get too nervous.

So how do those nerves from that night compare to what you are feeling now as you start the new gig?

It’s a completely different animal for me, and I’ve got so much to learn and I want to get as comfortable as I can as quickly as I can. But certainly come Thursday I’ll be feeling it a little bit as I get started.

What’s the process like preparing to be an on-course reporter compared to prepping as a caddie?

Certainly looking at the golf course it was in completely different context, because come Thursday there could be a short hitter in the group, a long hitter in the group and a left-hander, right-hander, all kinds of things. I’m trying to view the golf course completely differently and look at conservative plays, aggressive plays, again, just try to get comfortable with any sort of scenario that could come up out there. So you are now essentially scouting the course for three or two players at a time, not just one.

Absolutely. Basically, for anybody in the field in a sense. And so the great thing about this week is that there’s going to be so many layups off the tees, that a big component of what goes on out there golf-wise, guys thinking fairway first.

How much time have you spent on the course and what have you done preparation-wise?

I’ve looked at it a lot, and I’m going to look at it some more. I walked [Monday], all 18 holes, and I walked the front nine today. I’m just looking for little things, like the fact that on some holes out there the rough is heavier on one side of the fairway than the other. I hope to be able to pick up something like that and relay it to how the players might be thinking when they are teeing off.

Are there any facets of being an on-course reporter that you want to really nail? A part that you are focusing on more than others?

Well, I certainly want to get better. The player-caddie dynamic is hopefully something I can shed some light on and also, especially when you get to a tournament like this, there are going to be aggressive plays and there are going to be conservative plays. There’s more penal issues around the greens than your normal event, so bringing those up and how the players and caddies are bringing them into play is hopefully something I can talk about.

You’ve obviously had some good people to learn from at Golf Channel. Have David Feherty or Roger Maltbie or anyone else given you any tips?

Yes, yes. I’m soaking it all in. Hopefully I don’t have too much to say just a lot to listen too. Those guys, Roger, I think he’s amazing at what he does. They all are. I’m just trying to shadow them a little bit and learn about things like positioning so you can see shots played from the tee, and how it looks relative to the fairway and things like that. And give quality information. 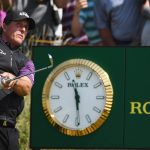 You may also like Phil Mickelson ditches driver, opts for two 3-irons Tuesday at Royal Birkdale

Is there a specific player, or a player who has a specific style or flair to them who you would really like to cover and follow more closely and break down what they are doing?

No, I don’t think so. I’m up for anything. The one thing I always loved about caddying that I’m going to hopefully love about this is being inside the ropes and watching these guys play at the level they do. It’s one thing I have always gotten a big kick out of.

How much would you love to, or maybe not like it because you are so close to it, be following Phil this week?

I don’t anticipate that being the case [of being assigned to Phil this week]. Obviously there’s several guys doing what I’m doing in terms of being on the ground out there. I do anticipate Phil having a really good week this week because it’s a great course for him, and I know he’s fired up to play. So I think there is a time and place for that, and that may happen a little further down the road.

So, if Phil is in contention and in the last tee time on Sunday, are you going to wake up that morning and think, “Man, I wish I was still on the bag.” Or is that all in the past now?

We have all moved on and whatnot, and I’ve got 25 years of memories, and things went pretty well. I wish him all the best. He’s a great player and he’ll be a great player out here for many years to come.

You may also like PHOTOS: The best of Phil Mickelson and Jim ‘Bones’ Mackay