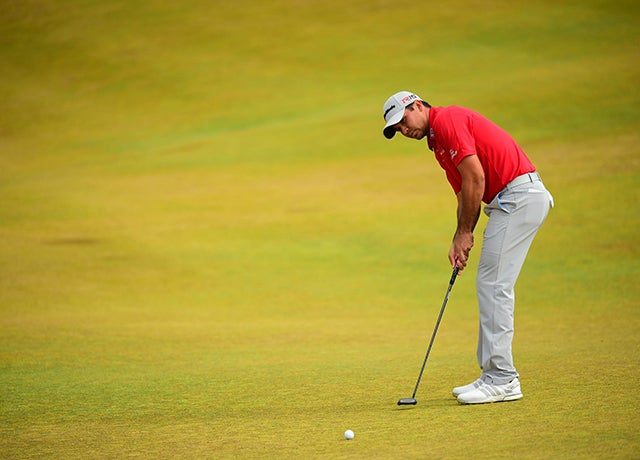 As Jason’s coach and caddie, I know what makes his game tick. Steal his 5 best moves and play like a PGA champ.

At setup, Jason erects a pyramid with his lower body, his knees set just inside his feet. As he swings to the top, his goal is to maintain the pyramid’s original shape. There’s no sliding, swaying or straightening of the knees. This limits the rotation of his hips. Paired with a massive shoulder turn (about 95 degrees), Jason’s backswing becomes a power coil. Big hitters traditionally max out shoulder turn and minimize hip turn.

Storing energy on the backswing is useless without proper sequencing on the way down. Jason and I have a drill to help him nail it every time. From address, he counts “1, 2, 3, 4” as he engages different body parts: “1” being his hands, “2” his arms, “3” his torso and “4” his hips. Once he reaches the top, he reverses the count and the sequence. Try it. Make your downswing “4, 3, 2, 1” by first moving your hips, then your torso, then your arms, and finally your hands. It’s a quick count—you’re not working on tempo here. But if you get it right, you’ll be able to time your swing so that the club reaches full speed right at impact.

At Whistling Straits, Jason was fifth both in driving distance (307.1 yds.) and fairways hit (73.2 %). Long and straight is hard to beat. Here’s his secret.

1. Set up in your regular address position. Now lean toward the target in a mock impact position. Get a feel for where your hands are, specifically where the Vs formed by your thumbs and forefingers are pointing.

2. Swing. Your goal? Return your hands to the same position they were in during the drill. It works for Jason, and it’ll work for you, too.

Work on draining 30-foot putts. Take dead aim! Jason’s twice as good as the field on these because he practices them. On the course, my task is to provide data—yardage, wind, elevation and more. It’s Jason’s job to absorb this information and formulate a few shot options, pick the one that feels the most comfortable, then go for it without a shred of doubt. It’s like taking an exam—the more you study, the better you’ll score.