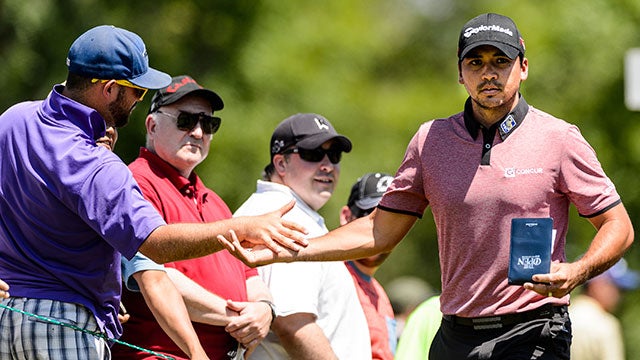 Jason Day high fives fans in his final round on Sunday.
Getty Images

“I’ve never felt so much at home, and I’m not even from Canada,” Day said. “I’m looking forward to coming back and defending the title here next year because I know that when I get here next year it’s going to be the same. It’s great to feel like a Canadian for a week.”

Day was coming off a fourth-place tie Monday in the British Open at St. Andrews. The 28-year-old Australian also fought through vertigo symptoms last month to tie for ninth in the U.S. Open. He has four PGA Tour victories, also winning at Torrey Pines in February.

“This must feel like what Tiger (Woods) did for so many times, and it feels good,” Day said. “I’m going to try to do as much as I can and keep it the same and try and win.”

Watson birdied the final four holes for a 69. 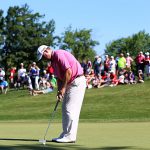 You may also like RBC Canadian Open 2015: Best Photos

Day birdied three of the first seven holes, but dropped strokes on Nos. 8 and 9. Playing a group ahead of Watson and Hearn, Day parred the first six holes on the back nine, then birdied the par-5 16th and par-4 17th to take a one-stroke lead.

Hearn, two strokes ahead of Day and Watson entering the round, had a 72 to finish third at 15 under.

“It was one focused mindset the whole day today to do something really special and win the tournament,” said Hearn, from Brantford – also hockey great Wayne Gretzky’s hometown. “It hasn’t been done in a long time, and I felt like I had the ability to do it today. I gave it my all. I didn’t quite have my best game.

“I’m real proud of the way I played and I’m really proud to be Canadian today. It was a pretty special day with all of the fans and the support that I had from beginning to finish.”

Pat Fletcher, born in England, was the last Canadian winner in 1954 at Point Grey in Vancouver, British Columbia. Carl Keffer is the only Canadian-born champion, winning in 1909 and 1914. Albert Murray, a Canadian also born in England, won in 1908 and 1913.

“It’s a matter of time,” fourth-place Jim Furyk said. “There are so many good Canadian players. I feel bad Mike Weir never won this golf tournament. But Graham DeLaet, David, there are a bunch of fine young players, so I’m sure it’s going to happen.”

Hearn was the first Canadian to have a 54-hole lead at the Canadian Open since Weir in 2004 at Glen Abbey. Weir led by three shots, but lost in a playoff to Vijay Singh.

“This one was pretty intense,” Hearn said. “I think every Canadian wants to see it so bad and we want to do it so bad that it does make it hard.”

Hearn birdied the first two holes, but gave back the strokes with bogeys on Nos. 3 and 7. He also bogeyed the par-3 12th, birdied the par-5 13th and closed with five pars.

“He was playing so good, he started off hot,” Watson said. “He putts unbelievable. There was so many putts that he hit that should’ve fell in. I don’t know how they stayed out. For him and Canada that would’ve been a great story. That would’ve been his first win. How amazing would that have been?”

Stewart Cink and Tom Hoge followed at 13 under, each shooting 66.