Jason Day to DJ: ‘That’s the most clutch thing I’ve ever seen anyone do for me’

Here’s a storyline you might have missed Friday night: Jason Day got to sleep in on Saturday morning.

It sounds silly, but it’s actually quite important for pros. And he has Dustin Johnson to thank.

Due to Friday’s rain delay, groups from the afternoon wave were hustling to finish before darkness so they didn’t have to return to the course early in the morning. That’s why DJ briskly walked to the 18th tee while playing partners Henrik Stenson and Day were still on the 17th green. Since Johnson teed off on 18 before the horn blew to stop play, his group was allowed to finish the hole.

Day was so happy he hugged DJ walking down the 18th fairway. 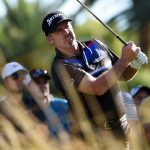 You may also like WATCH: Trying to beat darkness, Tour pro hits one of the worst shots in major history

“I just walked up to him and said, ‘That’s the biggest, or most clutch thing I’ve ever seen anyone do for me,'” Day said, laughing. “I had to give him a hug for it. He was happy, as well. Obviously to be able to finish and not have to wake up at 5:30 (Saturday), get some rest. Because it is hot out there and it does take it out of you, even though you are waking up early, you don’t feel like it did, but it really does. To be able to get that extra sleep and relax a little bit in the afternoon; it goes for Henrik, and Dustin, as well.”