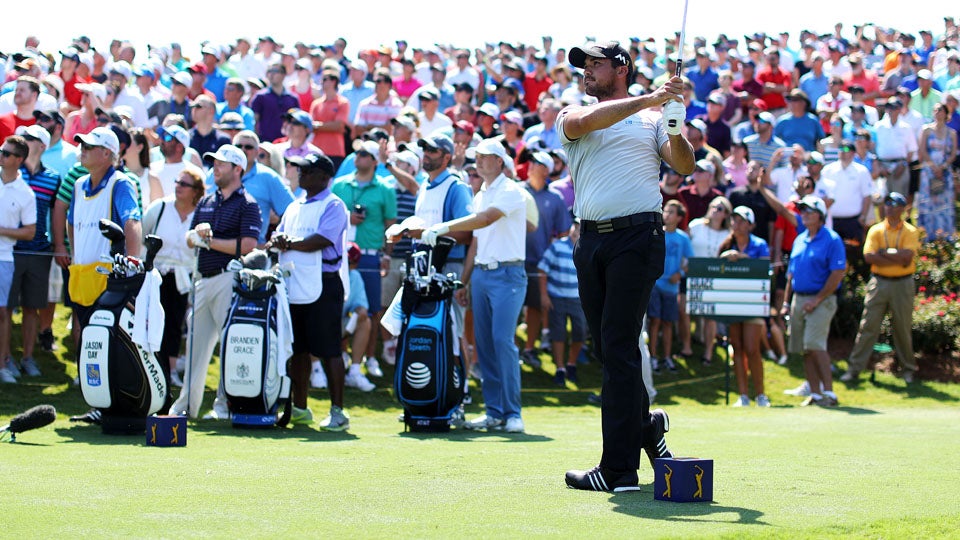 World No. 1 Jason Day cruised to a first-round 9-under 63 on Thursday at the Players, which tied a course record.
Getty Images

PONTE VEDRA BEACH, FLA. — It seemed like a good idea at the time. What wouldn’t be fun about pairing Jason Day and Jordan Spieth, the No. 1 and No. 2 players in the world, in the Players opening round?

It was tons of fun for Day, who did what the top player in the world is supposed to do on an easy scoring day in a big tournament, which is make nine pretty much routine birdies and shoot a 9-under-par 63 to grab the early Players lead. Day tied the record at the Stadium Course shared by Fred Couples, Roberto Castro, Martin Kaymer and Greg Norman.

Spieth, playing in his first event since the Masters, watched Day rack up birdies on the back nine (he shot 32) while he couldn’t get anything going. When Spieth finally rattled off three birdies in a row starting at the second hole, it looked as if he was going to get right back into the thick of contention, where he left off at the 12th hole Sunday at Augusta National.

He was three under par until he made a bogey at the fifth hole, then another at the six. A birdie at the short seventh minimized the damage but then he butchered the par-5 ninth hole with a costly double bogey that dropped him back to even par. On a day when scores were low, low, low, that was not a good score.

Most of the media members waiting for an interview behind the scoring building weren’t aware of his finish and were therefore a little surprised by his accommodating but unusually curt demeanor. After a handful of questions, somebody finally asked the right one — what happened at No. 9?

“I hit it seven times,” Spieth answered. “I hit two fantastic shots and then I’m not really sure after that.”

Upon further review… Spieth went for the green in two and found the back bunker, with the pin back right on the green. He fluffed his first bunker shot and barely made it out. From the rough on a steep slope, he got the next one only up to the fringe. He putted it to three-and-a-half feet from there, then missed a short bogey putt.

“I really only had two bad swings today,” Spieth said. “I’m hitting the ball great. I feel as comfortable over the ball and I’m driving it the best I’ve driven it the whole year. It’s just my distance control and then my speed control with the putter, which are things that sometimes take a round or two to get back.”

He hit 11 fairways and 13 greens but lost 2.3 strokes in the strokes-gained putting category—in other words, his putting was 2.3 strokes worse than everyone else in the field halfway through the first round. The putter is normally Spieth’s most deadly club. It wasn’t deadly Thursday as he pushed several putts to the right.

“It’ll come around,” Spieth said. “It’s something that I’m trying to trust right now, and it feels like I’m going to hit it left when it’s actually on line. It’s actually the same feeling I had at Augusta, and it worked fine there, so it shouldn’t be a problem. I just need to trust it.”

The bogey at the fifth hole was a momentum-stoppper, while the double at the ninth was the nail-in-the-coffin pounder. There wasn’t much wind Thursday but what there was, coming in and off the ocean, was fickle.

“We played 75, 80 percent of the holes into the wind today, it was flipping back and forth,” Spieth said. “Almost every tee shot was into the breeze.”

At the fifth, he said, his tee shot was into the wind. When he hit his approach, he explained, it was apparently downwind then and he hit his shot into a bad spot over the green. “I hit solid shots that just caught the wrong gusts,” he said, “but that happens.”

By the time Day finished his 63 (which tied him for the the course record), there were already 65s posted in the morning wave by Cameron Tringale, Shane Lowry, Justin Rose and Bill Haas. James Hahn, who won last week’s Wells Fargo Championship, was in a slew of scores at 67. He was paired with Haas and knew early on that scores were going to be unusually low at the Stadium Course.

“I peeked at the leaderboard on the front nine to see what other guys were doing and there were already 4- and 5-unders after 10 holes,” Hahn said. “Anytime you see that, you have to keep being aggressive out there. Seeing guys shoot 7- or 8-under, it kind of makes you fire at the flag more. And I was playing well with Bill (Haas), and every day I try to beat the guys in my group—at least one guy. Seeing Bill play so well, I was just trying to keep up with him.”

Day grabbed The Players by the throat from the start. He ran in a 30-foot birdie putt on the 10th green, his opening hole. It was so unlikely that after it dropped, he couldn’t help but laugh and flash a big grin.

“The greens were very receptive, it was a good day,” Day said. “The temperature was hot, the ball was going a long way and you’re coming in with shorter clubs in you hit the fairways. We thought the greens were sticking, so we could attack the pins.”

He found the greenside bunker just short of the par-5 11th green in two, played a nice sand shot and made a short putt for birdie. At 12, a short par-4, he spun a wedge shot to within five feet for another low-stress bird. The 14th is one of the Stadium Course’s tougher holes, a long par-4 with trouble on both sides, but Day stuffed his approach shot pin-high, eight feet away but misread the putt.

At 16, he missed the green left in two, pitched to eight feet and missed a great birdie chance. He dropped his approach shot in right of a back-left pin at the island-green 17th, not far from where defending champion Rickie Fowler put it in last year’s thrilling playoff, and made the putt for birdie.

He turned in 32, four under par, and then birdied three of the first four holes on the front. He added another birdie at the seventh and one at the ninth, where he actually was chipping for eagle and a chance to shoot 62. If a 63 can be mundane, Day’s 63 was mundane. But maybe 63 is never mundane, not at this course.

Day was asked if he recalled the last round where he had 18 birdie putts and no par putts longer than two feet—nine birdies, no bogeys.

“I shot an 81 the last time I played here, so, no,” he said with a smile, eliciting laughter. “I was really displeased with how I played last year, considering I was coming into that week feeling pretty good about my game and I just didn’t really play great in the second round. But I can’t really recall when I hit the ball as well as I did today and then also putted as well as I did. I’ve shot lower scores but everything kind of just clicked today.”

Jason Day. At his best.

Highlights of his course record-tying 63. https://t.co/4j0kHZLe7q