Jason Day Shoots 68 at US Open While Suffering From Vertigo 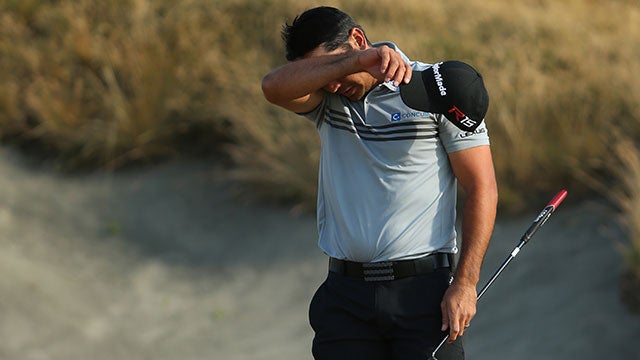 Jason Day carded five birdies on his back nine to vault up the leaderboard entering the final round.
Getty Images

The U.S. Open needed something.

The venue itself dominated coverage leading into the event. Fox Sports’ maiden telecast owned the first day and Chambers Bay’s greens owned the second. Tiger Woods, Bubba Watson and Rickie Fowler were all watching from their couch on Saturday, easily dispatched and never in contention.

This national championship had Jordan Spieth, Patrick Reed and Dustin Johnson – which is good, but we needed more.

Enter Jason Day, who shot 2-under 68 Saturday only twenty-four hours after collapsing en route to the green on his final hole Friday. Day suffered through his third round, but managed to claim a spot in Sunday’s final pairing alongside Johnson.

On Friday, it was questionable whether Day would complete the final hole, much less the tournament.

The 27-year-old bogeyed two of his first four holes and said he felt groggy on the front nine due to the drugs in his system. He fired a 31 on the back nine, including birdies on three of the last four to claw back to 4-under par, in a tie for the lead and a spot in the final group on Sunday. That’s macho.

The vertigo was so intense, Day almost withdrew three times on the back nine according to his caddie, Colin Swatton.

“The vertigo came back a little bit on the 13th tee box, and then felt nauseous all day,” Day said. “I started shaking on 16 tee box and then just tried to get it in, really. Just wanted to get it in.”

WOW! What Jason Day is doing is incredible! He still doesn’t look anywhere close to 100% but he is one tough Aussie!

Best round I have ever seen! Incredible performance!!! Great round Jason! Cheering for him to get through another healthy day tomorrow

“It was a monumental effort,” Swatton said. “He dug deeper than he ever has before.”

A three-time PGA Tour winner, Day has a sturdy U.S. Open record in terms of finishes, but spotty legitimate Sunday experience. In four U.S. Opens, Day has finishes of 2nd, T59, T2 and T4, but was only in contention to win once. In 2011, he finished eight shots back of Rory McIlroy. In 2013, he finished two shots back of Justin Rose after being in a three-way tie with Rose and Mickelson after 10 holes. In 2014, he was 10 shots behind Martin Kaymer.

In his pre-tournament press conference, Day lamented the fact that whenever he was playing well, something derailed him, whether it be injury or his vertigo. He’ll have a chance to remove his name from the best player to not have a major list.

And prove he’s anything but fragile.

Day tees off with Johnson Sunday afternoon at 3 p.m. PT.