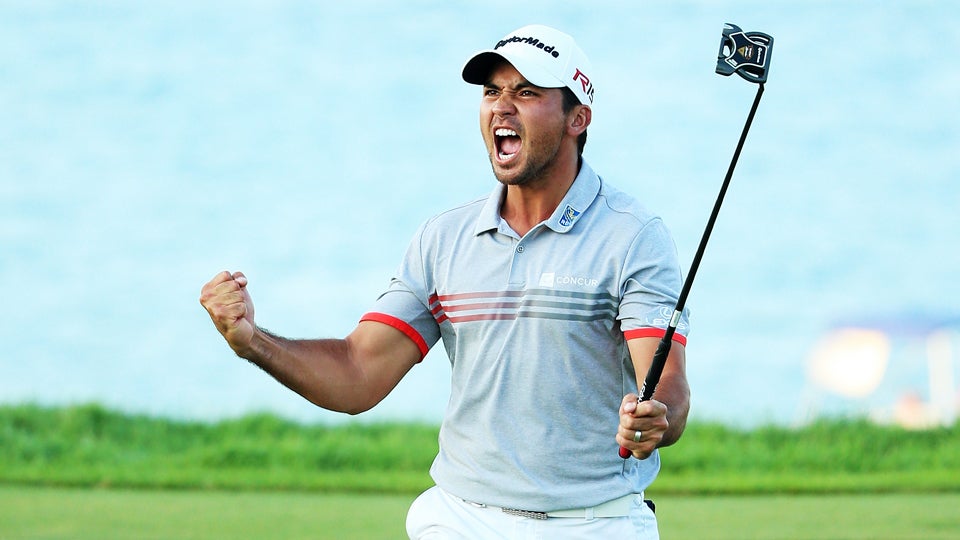 Jason Day reacts after sinking a putt on the 17th green during the third round of the PGA Championship at Whistling Straits on Aug. 15, 2015, in Haven, Wisconsin. Day leads Jordan Spieth by two after three rounds.
Andrew Redington/Getty Images

HAVEN, Wis.—The 97th PGA Championship has one round to go and Jordan Spieth will be playing for history… again.

No, the amazing young Texas can’t win the Grand Slam. That ended when he missed the British Open playoff won by Zach Johnson at the Old Course last month. But Spieth continued his incredible play Saturday at Whistling Straits and now he’s got a realistic chance to win yet another major championship.

Sound familiar? Yeah, stop me if you’ve heard this before.

Only Ben Hogan and Tiger Woods won three majors in a calendar year. Spieth is poised to possibly join them after he rallied with a sizzling back-nine 30 to shoot 65 and get within two shots of third-round leader Jason Day of Australia.

Day had g’Day, all right, shooting 66 to finish at 15-under par. So did Spieth, of course. Branden Grace, who shot 64, and Justin Rose are tied at 12-under, three shots back, and former PGA and U.S. Open champion Martin Kaymer is four strokes behind after his 65.

To quote (and slightly alter) an old Meatloaf hit song, “Three Out of Four Ain’t Bad.”

The history part isn’t what appeals to the 22-year-old Spieth, just the major championship part. And he was pretty much on fire on the back nine Saturday, and he needed to be. He was six shots back early on the final nine and then put up six birdies, including the last three holes in a row.

“We don’t get to play another event like this until April of next year,” Spieth said. “That makes you think, Wow, there are only a few of these, they are precious and you need to make the most of them.

“I certainly have a little chip on my shoulder this week from those last couple of holes at St. Andrews but that won’t be in my head tomorrow. Tomorrow, it will be drawing on all the positives we’ve done when we did win, why we won and how we’re going to make it happen again. The only history I’ll be thinking of when we step on the first tee tomorrow is trying to get my name on the Wanamaker Trophy.”

It was starting to look like Day might run away with this PGA—only Matt Jones was within two shots when Day found a greenside bunker at the par-4 15th hole and needed two to get out. That led to a double bogey that dropped Day back to 14-under par and suddenly let a lot of pursuers back into contention. Jones later faded with back-to-back bogeys and then a double bogey of his own at the par-3 17th.

Spieth made a familiar back-nine charge—stop me if you’ve heard this one before. He got off to a slow start, making nine straight pars after an opening birdie and was starting to lose sight of Day. Then Spieth did what he’s been doing all year, which is refuse to go away. He birdied 11, 12, 13, 16 and 17 and then stuck an iron shot close at the 18th. He had an eight-footer for birdie. Would he make it? Gee, what do you think? He’s Jordan gosh-darn Spieth! Of course he made it, leading to what may have been the loudest roar of the day at the Straits.

“I was able to dial it in after the fifth hole,” said Spieth. “I felt really good on those last five holes.”

Day rallied after his double bogey with a clutch birdie putt at 17, then played a smart approach at 18 and narrowly missed an 18-foot birdie putt. Sunday’s final won’t be anything new for him. He had to battle with Spieth at Chambers Bay in the U.S. Open and again at St. Andrews in the British Open. The only difference is, Spieth has already landed his majors. Day is still looking for his first one.

“I’ve been here before so I kind of know what to expect,” Day said. “I haven’t won before so that’s something that is possibly a new experience for me. My confidence level is high and I’m just enjoying being on the golf course rather than in previous majors, when I viewed them as very stressful. It’s been fun to be out here in pressure situations. It’s good to be in contention, especially on Sunday. It’s good to have the lead. That’s a plus. It should be an exciting challenge playing against Jordan.”

Asked about dealing with the mental preparation of a late afternoon tee time in a major, Day seemed as relaxed as he said he’s been on the course all week.

“I haven’t had too much to think about over the last few days, especially with the delay and the turnaround,” he said. “I definitely won’t watch any golf. I won’t read any articles, for sure. I won’t be watching you.” Day joined in the pressroom laughter after he delivered the last line. He said the bunker mistake on 15 was a result of more sand in the bunker than he expected, but he was pleased to recover by making a big birdie putt at the 17th.

At this rate, it’s likely someone will have to break the 20-under-par barrier to win this PGA. That would be historic. Tiger Woods and Bob May set the PGA record of 18-under par at Valhalla in the 2000 PGA and Woods matched it six years later at Medinah. Woods owns the major championship record of 19-under at St. Andrews in the 2000 British Open.

You had to shoot low to make a move Saturday as soft greens, smooth putting surfaces and a lack of the usual breeze created a perfect storm of red numbers. Whistling Straits has mostly been missing its whistle since the first round and players took advantage. The third-round scoring average hovered around 70.5, one-and-a-half strokes under par, hardly a typical major championship statistic.

Grace charged up the leaderboard with 64, capping it with a surprising but scintillating hole-out from the front bunker at the 18th. You may recall him from the U.S. Open at Chambers Bay. He was right in the thick of that shootout between Spieth and Dustin Johnson until he blocked a 3-wood out of bounds on the 16th hole in the final round. Grace, a South African, has been a solid player around the world and now is starting to state his case in the majors. 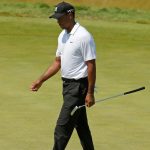 “I think I’m finally getting the hang of America,” Grace said. “This is a dream to playing out here and I’ve been playing some great golf. The U.S Open was a good one and even the Open Championship got the confidence up, knowing I can play in this environment and under this pressure. I’m as excited as can be.”

Grace caused one of the day’s loudest roars with that unexpected bunker shot at the final hole. “I got fortunate, my ball stayed a little on the upslope, which made it easier,” he said. “I got lucky and it worked out.”

Kaymer, who blitzed the U.S. Open field at Pinehurst last summer to claim his second major title, picked up where he left off five years ago. He shot 31 on the back nine with five birdies en route to his 65 to give himself a chance.

“Five years ago I was five or six shots behind after the third day and all of a sudden, I was leading after six holes on the golf course,” said Kaymer, who is from Germany. “So much can happen in the last round in major championships. I’m just glad I put myself in a position to maybe have a chance.”

Obviously, Kaymer is a big fan of Whistling Straits and his play shows it.

“I always enjoy courses where you have 18 holes and there’s not one boring hole,” he said. “Every hole has something that makes you think, there’s always something tricky. It’s such an interesting course. If you don’t hit it well, you can easily shoot 75 or 76. But if you hit fairways and make a couple of putts, you can shoot a good score. It’s just really fun to play and at the same time, it’s a beautiful spot. It’s very difficult to beat views like this.”

The final round will likely be a shootout. Kaymer knows how challenging it is in majors.

“Even at the U.S. Open I won last year, I didn’t play perfect golf,” he said. “It looked pretty perfect on TV but as a player, you know, I got lucky there. The third day, I putted off the green. Wow, what’s happening, how can he be leading by eight shots? Scrambling is a big part but at the end of the day, the guys who hit the ball solid will win. Jason Day looks like he has it all, really. He hits it very long, very straight and is fantastic in the short game. It’s going to be very, very difficult to catch him.”

Dustin Johnson, whose BunkerGate gaffe has been replayed ad nauseam on Golf Channel all week, is still on the verge of contention. He shot 68 to reach 9-under par. With low scores a reality, you never know.

With 18 holes left, we still don’t know who’s going to win the PGA, but we know it isn’t going to be the world’s No. 1-ranked player, Rory McIlroy. He fizzled out after a great start to his third round. He shot 68 and finished at 6-under par but he squandered a great opportunity to make up ground and now looks to be too far back to recover on Sunday.

McIlroy birdied the second and fourth holes, then eagled the fifth but gave two strokes back with bogeys at six and eight. He made four more birdies on the back nine but also made two costly bogeys.

“I got off to a dream start, really,” McIlroy said. “To be 4-under through five but to give those shots away on six and eight, I guess that just shows a lack of competitiveness considering this is the first week back. But there were really positive signs out there. I’m hitting the ball great, I putted much better today so if I keep showing improvement every day like I have done, it’s a good sign going into the rest of the season.”

The eagle came on a 65-foot putt from the fringe at the fifth hole. McIlroy told his caddie to leave the pin in.

“I’m glad I did, it was going six or eight feet past,” McIlroy said. “It was nice to see that one drop. It was a dream start and then a little disappointing that I wasn’t able to keep it going.”

McIlroy plans to take two weeks off and return for the second leg of the FedEx Cup Playoffs in the Boston area, which means he’ll skip the opening event in New Jersey. After the FedEx Cup, he’ll tee it up at the Frys.com, the first event of the 2016 season, believe it or not, then he’ll play a few more, probably in Dubai and China.