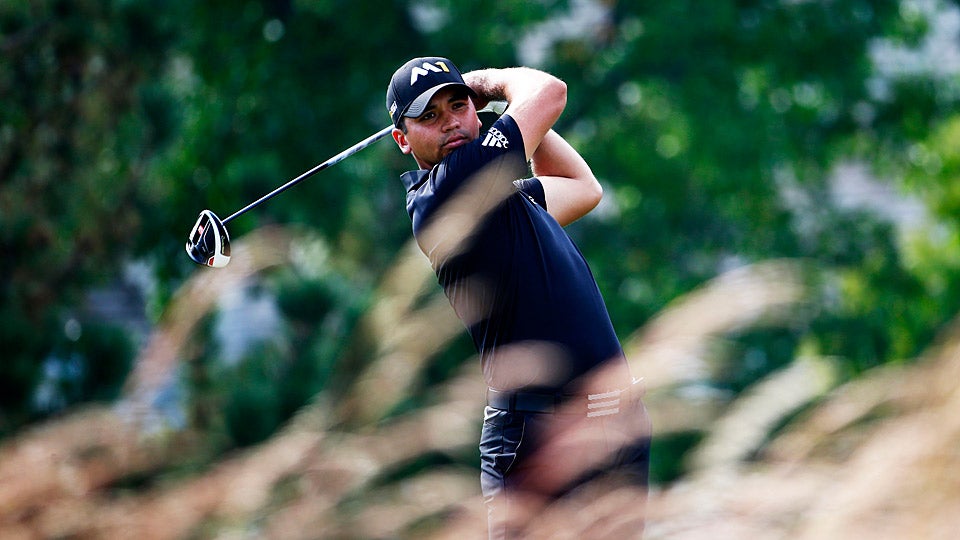 Jason Day during the first round of the 2015 BMW Championship.
Getty Images

LAKE FOREST, Ill. — Jordan Spieth made a hole-in-one and even that wasn’t enough to steal the spotlight from Jason Day here Thursday at the BMW Championship.

Jason Day, as they say on the Internet, is trending. Definitely, absolutely, unquestionably trending.

For those who thought the talk of a New Big Three (Day, Spieth and Rory McIlroy) was hyperbole in the wake of Day’s record-setting PGA Championship score, it’s time to think again.

What Day has done in the last six weeks is look like the best player in the game. As long or longer than McIlroy. As good or better on the greens as Spieth. As cool as the other side of the pillow on the dark side of the moon.

This is just the opening round of the BMW Championship at Conway Farms, where Jim Furyk fired a 12-under 59 two years ago. While Day made a run at 59 today, Furyk added a dose of irony by withdrawing with a wrist injury, which could put his Presidents Cup in doubt. If he can’t play and is ruled out before the event starts, by the way, captain Jay Haas can replace him with a captain’s pick of his choice.

Day underscored what a significant year in golf this is turning out to be, what with the rise of Spieth and Day and maybe Rickie Fowler to challenge McIlroy. You don’t create significant, lasting drama on a Thursday, but a pretty good crowd for a weekday in September when the Chicago Cubs had an afternoon game saw some impressive stuff.

After opening with a four-under-par 32 on the back nine, Day drove it into a fairway bunker on the first hole. His approach shot hit the green and zipped back to the right and coasted into the cup for an eagle. All Day could do was wave, grin and chuckle. It was a sweet but unexpected eagle. Read some symbolism into this next moment if you want. Do Day and Spieth have a full-on rivalry yet? Probably not, but moments after Day’s eagle, Spieth stepped up on the second tee and hit a 7-iron shot that landed just off the edge of the par-3 green and kicked right, directly toward the pin. That ball, too, coasted into the cup for a hole-in-one and drew a huge roar. All Spieth could do was wave, grin and chuckle.

When the ball was in the air, Spieth urged loudly, “Be enough!” He knew it was going to be close and it was. The ball landed on the thick grass of the collar, then redirected and bounced toward the cup.

Oh, the show wasn’t over yet. Day had a 25-footer for birdie that he — naturally! — rolled right in on top of Spieth’s ace.

It was around that time that fellow PGA Tour player Steve Wheatcroft, not playing at the BMW, tweeted this about Spieth: “Phew! I thought we were gonna have to start calling him the Silver Child. Nice to see he’s finally catching some breaks.”

Day hit it close at the third for another birdie to go eight under through 13 holes but then he hit a couple of wayward drives and stopped getting easy birdie chances.

Rickie Fowler was playing along with the twosome, not that anyone noticed with all these fireworks going on.

Check that. Fowler played a starring role in a slightly comical moment at the 16th hole. Spieth had already stuck an approach shot ten feet past the pin when Fowler hit. Fowler’s ball hit Spieth’s ball on the second bounce and in a blur, one ball bounded over the green into the thick rough and another ball spun back to a foot from the flagstick.

Fowler walked onto the green, had the pin pulled and was going to tap in his apparent gimmie-birdie until a spectator started yelling at him, “No! No! No!” Fowler, taken aback, stepped away because of the commotion and everyone looked into the stands. Spieth gave a big shrug as if to say, “What’s the problem pal? We’ve got it under control.”

The fan was obviously confused, thinking it had been Fowler’s ball that bounced over the green and he was just trying to prevent Fowler from drawing a penalty for playing the wrong ball. It wasn’t the wrong ball, however. Spieth picked his ball up from the rough and, after asking fans about where it was before it was hit, placed it on the lip of the cup with a big smile.

It was the comedy gag of the day which, in the world of golf, is usually a bar that’s set pretty low. The fans lapped it up, though, and of course Spieth relocated his ball to where it should have been after getting more information.

Spieth suffered a rocky start with a couple of early bogeys but he warmed up, following that ace with a pair of birdies

This is the real secret of the success of the FedEx Cup. It isn’t the complicated points system that resets before the Tour Championship. Fans aren’t following along with all that malarkey. The FedEx Cup has effectively forced the top players to play three or four events together in August and September, bringing marquee power to a month that used to be a white-flag surrender to football season.

When you get the top players together, stuff happens. Like the Day and Spieth exchange. Like Day taking a run at 59. He parred three straight holes after that birdie at No. 3 and it looked like the 59 Watch was over. Then he birdied the seventh and hit a big drive at the par-5 eighth hole. Day’s second shot cleared the greenside bunker and a pit of rough and trickled onto the fairway just in front of the green. It was going to require a delicate pitch full of finesse of Day was going to keep alive his chance for 59.

“This has been an overpowering performance to watch,” commentator Roger Maltbie on Golf Channel’s telecast said as Day prepared to play his pitch.

Day struck it nicely but missed it just left and kind of shook his head in disappointment. It was pretty clear he knew he still had a shot at 59 and, oh yeah, he was trying to make it, and now that 59 pursuit was realistically over.

He tapped in his short putt for birdie to get to 10 under on the day.

At the ninth, his final hole, Day hit a big drive that just trickled into the edge of the thick rough right of the fairway. Before Fowler could hit his drive there, though, the weather warning siren sounding, halting play.

A storm was approaching. It probably wasn’t going to be as impressive as the one we had just watched. Pretty good for a Thursday.