Jason Day of Australia and Tiger Woods of the United States shake hands on the 18th green during the second round of the 144th Open Championship at The Old Course.
2015 R&A

If there’s one person in the world of golf who knows how to power through pressure and distraction on the golf course, it’s Tiger Woods. That’s probably why Jason Day turns to him for guidance on how to stay mentally strong.

At a press conference at Trump National Doral Miami ahead of the WGC Cadillac Championship this week, Day talked about calling up Woods to ask for advice on practice, balance, and how Woods was able to dominate the game for so many years. 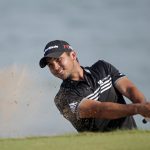 Day is currently ranked number two in the world. But despite an impressive string of wins in the latter half of 2015, he’s had an uneven start to 2016. Day said that he believes figuring out how to stay focused and tough is the “last piece of the puzzle.” “Once I improve the mental game for myself…I think I’ll be able to go out there and just kind of kill it,” he said. Tiger emphasized the importance of mindset in their conversation.

“Talking to him, every time that I talk to him…it’s mindset, mental toughness, effort. It didn’t matter how bad it was. If it was a course that he did not like, he was just going to flat out execute you. It did not matter.”