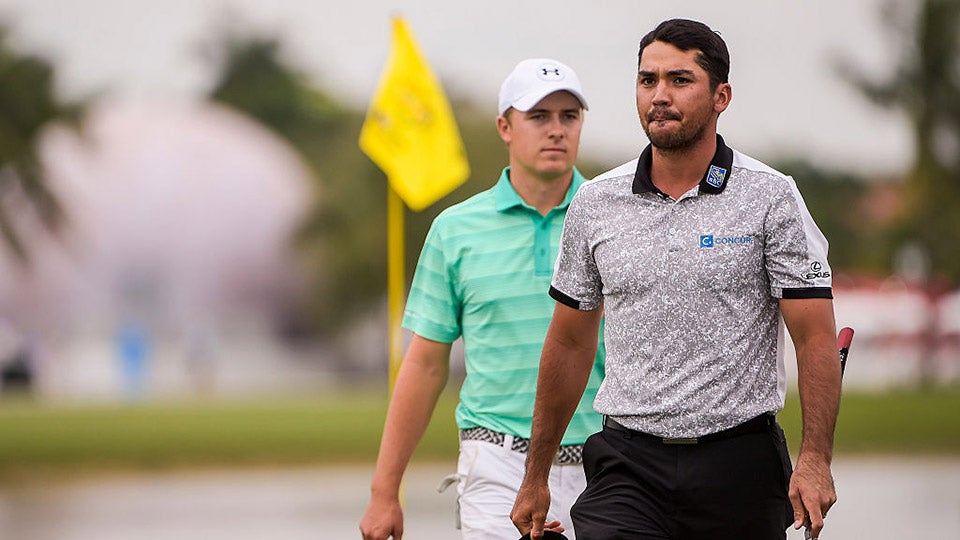 Jason Day of Australia walks in front of Jordan Spieth on the 18th hole green during the first round of the World Golf Championships-Cadillac Championship.
Caryn Levy/PGA TOUR

AUGUSTA, Ga. — The 89 players in the 80th Masters can practice their putting at the green next to the driving range, which is only about half ringed with fans, or they can go to the small green just behind the first tee, which is marbled with badge-wearing, beer-swilling humanity.

Jason Day chose the latter option earlier this week, working on his stroke with no other players around him. He was even absent his caddie, Colin Swatton, as patrons gawked at him. Day looked lonely. He looked trapped. In other words, he had unwittingly wandered into the perfect metaphor for what it must feel like to be the No. 1 golfer in the world.

“There’s not one guy out here that is dominating right now,” he said in his press conference here, seemingly distancing himself from the stultifying pressure of occupying the lonely perch atop the ziggurat. But the 28-year-old Australian also said this: “I feel comfortable with where I’m at, walking around the grounds No. 1 in the world. It’s a good feeling.”

It’s also a fleeting feeling, for most. Welcome to Reason No. 1 why golf is different in the post-Tiger era. Woods walked into every locker room believing he was the hulking planet around which all others orbited.

Modesty? Ha! False modesty? Pointless. Woods was No. 1 in the World Ranking for a staggering 683 weeks. Those days are long gone, but not because he wasn’t uniquely suited to the role.

What is it about reaching No. 1 that sends most players plummeting back whence they came? Is it that the number of media requests escalates exponentially? Is it that good and even great charitable causes come calling with a frequency that by necessity leaves some disappointed? Is it that autograph lines keep sprouting new heads ad infinitum until your pen runs out of ink and/or your hand cramps? Answer: Yes.

In Woods’s absence we’ve seen a game of World Ranking hot potato that owes partly to the psychic struggle that confronts mere mortals upon reaching the top. Yes, the view is great, but it can also make you sick. The No. 1 ranking may as well come with an honorary ecclesiastical vestment embroidered with a lovely, inviting target.

“To be honest,” Jordan Spieth said upon losing No. 1 to Day at the Dell Match Play, “it could be a good thing for me going into the Masters.” He may have been right. After cracking his driver and breaking in a backup into the early evening Wednesday—he accepted his Player of the Year award at the Golf Writers Association of America dinner in golf clothes—Spieth played like the self-styled “free-rolling” guy we saw in 2015 as he shot a 6-under 66 in the breezy, cool first round Thursday to take the outright lead. He played like a guy trying to get to No. 1, not stay there.

Don’t tell him, but Spieth would take back his top ranking with a victory on Sunday if Day finishes outside the top five. Which begs the question: Has anyone ever politely declined the No. 1 ranking?

Spieth isn’t the only player with mixed feelings about the top spot.

“I think it’s great to have a few guys at the top of the game,” said Rory McIlroy, who was No. 1 for 95 weeks, in his press conference here.

What happened to our Rory? Did No. 1 happen to him? He has been less than ebullient as of late, his new cross-handed putting grip unreliable under pressure and not yet up to the superhuman standards of putting savants Day and Spieth. This is in stark contrast to 2014, when McIlroy looked unstoppable as he picked off his third and fourth majors. At least his 95 weeks at the top still bests Spieth (26 weeks) and Day (six). For now.

Lee Westwood was No. 1 for 22 weeks. He liked getting to No. 1 but was not unhappy to fall back. “It’s very time-consuming,” he said of golf’s pole position. Luke Donald, who was No. 1 as recently as 2012, has fallen so far, so fast he didn’t even qualify to play in this Masters.

Golf’s official World Ranking began in April 1986, and since then 19 players have had a taste. On the continuum of No. 1s, they’re all still closer to Tom Lehman (a single week) than Greg Norman (331) and Woods. And many of them would happily trade careers with Hall of Famer Phil Mickelson, who has famously never ascended to the top spot.

Among the former No. 1s in this week’s field, in addition to the Big Three and Westwood—Ernie Els (nine weeks), Martin Kaymer (eight), Bernhard Langer (three), Adam Scott (11), Vijay Singh (32) and Ian Woosnam (50)—only Els’s career comes close to Mickelson’s.

David Duval, who is attending this Masters as an analyst for the Golf Channel, found that reaching No. 1 wasn’t all he had hoped. He wasn’t alone. Upon his arrival at the top spot, Kaymer wondered aloud what he had to do to be happy. He spoke ominously of, “something missing.”

Bill Rogers won seven times in 1981, including the British Open at Royal St. Georges, and was Player of the Year. But he went after appearance money overseas, wore down and walked away in the middle of his second round at the 1988 Texas Open. He would eventually take a club pro job.

The most insidious part of No. 1 might be the feeling that you no longer have the freedom to have a bad day. Woosnam said he sensed he was “letting people down” if he missed a cut, and chased ill-advised swing fixes.

For a while it seemed Spieth had become a mash-up of cautionary tales, one part Rogers and one part Woosnam.

After copious globetrotting at the end of 2015 and beginning of 2016, Spieth admitted he was worn out. And he grew ever more irritable as his scores didn’t match up to his already formidable legend at age 22. He was making poor decisions, he said at the Valspar Championship north of Tampa, where he finished 18th. Not only that, he added, but his caddie, Michael Greller, was also thinking poorly.

But then came Thursday at Augusta, when Spieth birdied the third, sixth, eighth, 10th, 13th and 18th holes. He was back. He had lost No. 1, but gained freedom. He was the latest reminder that the ball on the tee is just as oblivious to a player’s World Ranking as it is to his age, but that the ball on a player’s shoulders often reads too much into both numbers.

Spieth hadn’t even addressed the media after his bogey-free round when it became apparent that he might have company. Day, on the strength of an eagle at the par-5 second and birdies at the fifth, eighth and ninth holes, had gone out in 5-under 31. He seemed to be closing fast.

Or not. Day three-putted the par-5 15th hole for bogey, hit it in the water and triple-bogeyed 16, and bogeyed 17 to drop back to even. He signed for an even-par 72 and will go into Friday six off the lead. It was a stunning turn, but then we’re used to some squirming from the guy occupying the hot spot at No. 1. It’s a nice place to visit. You wouldn’t want to live there. 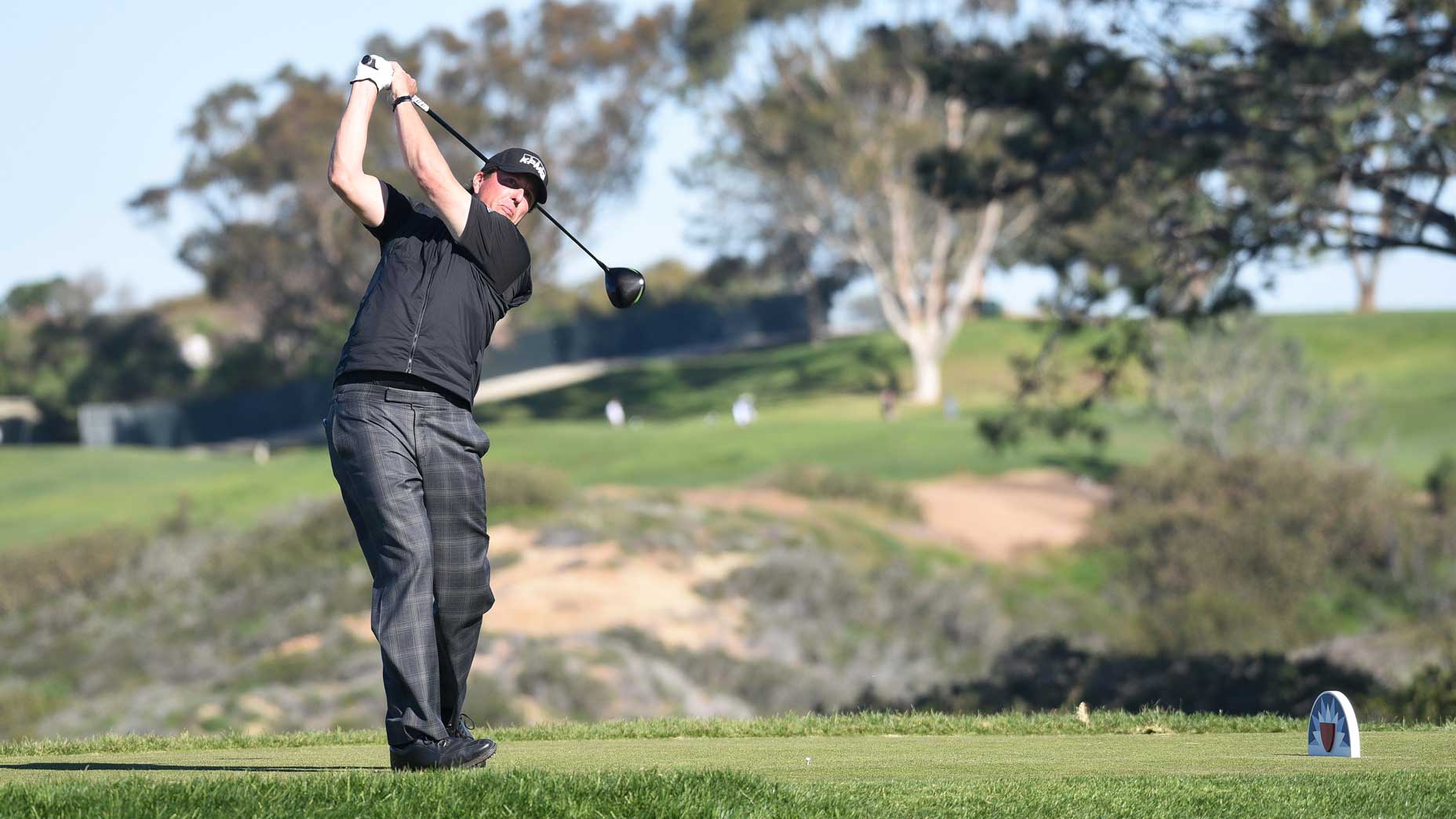