Jack Nicklaus Shares His Favorite Memories From His 1986 Masters Win 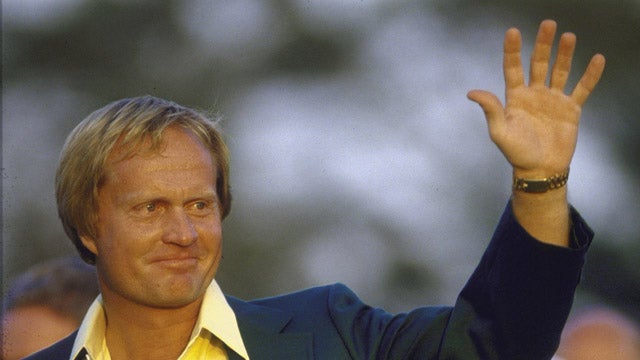 He saved the best for last, winning his 18th major and sixth green jacket in 1986, at 46. Thirty years later, Jack Nicklaus shares some memories from the greatest moment in Masters history.

It’s said that the Masters begins on the back nine on Sunday afternoon, and that was certainly the case with the greatest Masters of all time. Nicklaus was not one to have caddies read putts for him, but throughout that week in 1986, and especially that Sunday afternoon, his son Jack Nicklaus Jr. was on call. “I might say to Jackie, “Looks like it breaks about four feet,” and get confirmation,” recalls Nicklaus, who made this 25-footer, his second of three straight birdies.

Whenever Nicklaus sees photos of this 12-foot eagle putt, which put him 7-under and one behind leader Seve Ballesteros, young Jackie’s vertical leap catches his eye. His son, the first of Nicklaus’s five children, was good at every sport he played and competed on the North Carolina golf team with Davis Love III. Jack, teasing Jackie, once looked at this image and said, “If you could have jumped like this when you were at North Carolina, you could have played with Michael Jordan.” The last of Augusta’s four par 3s was playing 170 yards on Sunday, a perfect 5-iron for Nicklaus. With the ball in the air, Jackie said, “Be right.” “It is,” Nicklaus replied. “It’s probably the most arrogant comment I’ve ever made on a golf course,” he says today, “but I knew it was perfect.” The ball nearly went in the hole, and Nicklaus made a short birdie putt to go to 8-under and stay 1 off the lead.

On 18, Nicklaus left his 175-yard approach shot 40 feet below the hole. Between the 1985 and ’86 Masters, he was brought in to remove some slope from the ninth and 18th greens, so he knew the putt wasn’t as uphill as it had once been. His roll came up just inches short. “Had it gone in, it would have made the next hour of my life a lot easier,” says Nicklaus, who finished at 9-under. This was the first time that day he could soak up the appreciation from the fans. “Walking off 18 at Augusta on Sunday is always special,” Nicklaus says. But especially when you’re the leader in the clubhouse.

Tom Kite came to 18 needing a birdie to tie Nicklaus. He made par. Playing in the final pairing, Norman, following four straight birdies, needed one more to win and a par to force a playoff. He made bogey, the last twist in a storybook tale. But this moment is all about Jackie and Jack. Nicklaus’s own dad, who died in 1970, saw his son win a bunch, but he missed a lot, too. “So much of men’s professional golf is about the father-son relationship,” Nicklaus says.

After watching the tournament’s finish from Jones Cabin, Nicklaus strode into Butler Cabin, where Augusta’s then executive director Jim Armstrong greeted him holding two green jackets. That’s because Nicklaus, a winner of five previous Masters, still didn’t own one. When he claimed his first jacket, in 1963, Arnold Palmer helped him slip into a 46 long that was handy, even though Jack was a 43 regular. “It wasn’t until 1998 that I got my own coat,” Nicklaus says. “Jack Stephens was the chairman then, and he heard I didn’t have one. So when I got to the club that year there was a note in my locker that said, “You will go to the pro shop, and you will get fitted for your own green jacket.”” It’s been said that Nicklaus invented and popularized the hard-collar golf shirt. He liked that you could wear it with a blazer, a pro tip that floppy-collared 1985 winner Bernhard Langer clearly didn’t pick up on. Nicklaus’s yellow shirt was a conscious style choice, too. “I wouldn’t wear a shirt at Augusta that you couldn’t wear with the green jacket,” he says. Timepiece aficionados will note that the Rolex on Nicklaus’s wrist was given to him by the Swiss watchmaker in 1967 and was his everyday watch for 46 years.

The media was awed by the Bear’s win. (That day, wrote SI’s Rick Reilly, “all heaven broke loose.”) Five shots off the lead on the ninth tee on Sunday, Jack had charged to his sixth Masters win. At 46, his final-round 65 made him the tournament’s oldest winner. It was also his 18th professional major title, a record—the perfect golf number—that didn’t get much attention until Tiger Woods began his run. Really, though, Jack’s win transcends stats. “I caught lightning in a bottle that week,” he says. The bottle still glows.