It’s First-Timers Day at the Players: Meet the Rookies 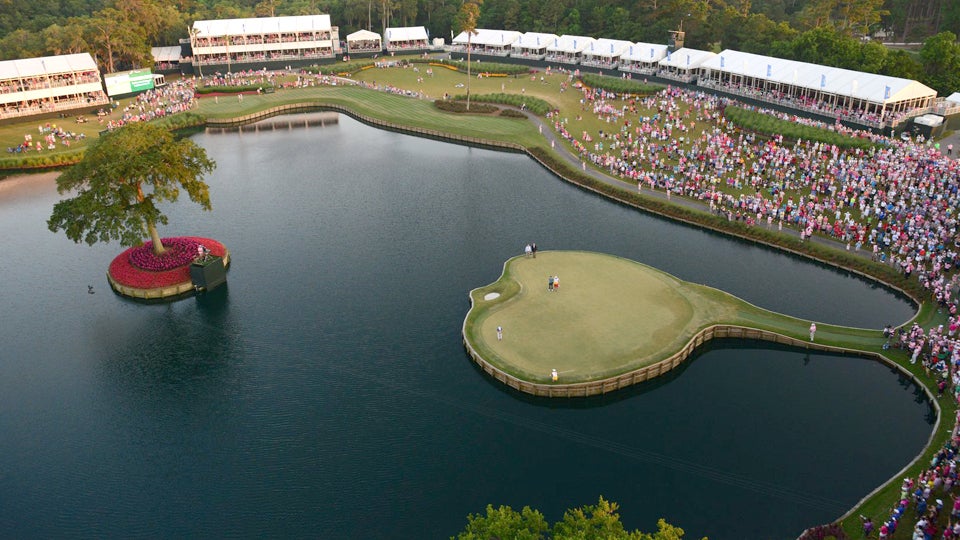 When GOLF tracked a February day at the 17th in 2011, a total of 107 balls were hit into the water.
Fred Vuich for SI

PONTE VEDRA BEACH, Fla. — It wasn’t just another Wednesday at the Players.

Wednesday is First-Timers Day, when the PGA Tour trots out the players competing in their inaugural Players for a group interview session. There were 20-plus First-Timers this year so they sent us all out to the lawn in front of the clubhouse by the ninth green so there would be enough room for the interviews, cameras, Facebook Live sessions, food fights or potential brawls that might break out.

Nothing like the latter happened (dang it!) but it is a fun arrangement and with attendance numbers like these, there’s no way you can get around to all of the newbies. You’ve got to pick your spots.

This is what I learned from the first-timers on Players Eve:

“I was playing the Valley Course up the street in the Web.com finals in 2013,” said Peter Malnati, a die-hard Kansas City Royals fan who’s got a sweet endorsement deal with Major League Baseball. “I told myself then, I am going to be back here playing the Players soon. That year, I was in the pro-am on the Valley Course but I had an afternoon time, so I got in a cart that morning and played the Stadium Course first just to see it. So it took me two and a half years but here I am. This is the realization of a goal, so that’s pretty cool.”

Andy Sullivan of England will turn 29 in a few weeks and may be the most underrated player in the top 50 of the World Ranking. He won three times on the European tour last year and looks like yet another European who’s going to be tough in the Ryder Cup. He’s got game, not to mention a delightful personality.

“I’ve seen this place on the telly (television) so many times, you get that major feel about it straight away,” Sullivan said. “I just got here Monday, it’s got that major vibe and it’s got the finishing holes to justify it. Obviously, it’s not the fifth major but it’s got that look. A lot of Europeans give this event the respect that it deserves. I’m happy to be here. A year ago, I was 180th in the world, so, I’m happy to play anywhere.”

Zac Blair, 25, played college golf at Brigham Young and advanced through PGA Tour Latin America and the Web.com tour to get here this week. His dad, James, also played a bit of golf and competed in the 1981 U.S. Open.

“This is awesome,” Blair said, peeking back at the enormous TPC Sawgrass clubhouse. “Growing up when I was out there beating balls or chipping, this was always my goal. This is something I wanted to do and I’m glad to finally make it happen.”

Malnati: “I’ve been trying to replicate the emotions I’m going to feel tomorrow. I’m starting on the 10th hole but there’s just no way to prepare. At end of day, I hope I just realize, it’s a 8- or 9-iron, there’s plenty of room up there, just go try to make a birdie. Heck, that green is going to look stinking tiny tomorrow, but it’s really not.”

Sullivan: “My first round Monday, I hit two balls. One went in the bunker. It’s the smallest bunker in history so to hit that is quite impressive in itself. I hit the next one to 10 feet, so I’m two for two on dry land and I’m pretty happy with that. If I could come off that hole with four 3s this week, I’d be a very happy man.”

Malnati: “The first time I played that hole—there was no pressure, no tournament. I may have been playing Chris Baker for $5. I step up on that tee with absolutely nothing on the line and—I was nervous. It was, Aaaggghhh! This is it! I did hit it on dry land, I remember that much. But that hole symbolizes what it’s like for me to be out here. Every week, I warm up on the range next to great players. I had breakfast with Ernie Els in San Antonio. I grew up admiring him when I was a little kid. Now, that’s the world I live in. It’s so cool.”

Zac Blair started his pro career in South America—while still finishing up school at BYU—and then played his way into onto the Web.com tour, then the PGA Tour. His Latin American adventure was, well, an adventure.

“It was a little dicey for me at times being down there alone because, no habla espanol for me,” said the baby-faced Blair. “It helped me mature and learn to travel. I had one scary taxi ride in Mexico. I was going to the airport and I had the route to airport on my phone and this driver wasn’t following it, he was taking every back alley you can imagine. I thought, ‘This is not good.’ This might one of those horror movies with the trapped teenage tourists who get tortured. But I got to the airport faster than anyone else so I guess he knew the shortcuts. So it turned out well. It’s a good tour, they do a good job with it and I love Latin food.”

Said Jamie Lovemark, 28, a Jack Nicklaus Award winner while a freshman at Southern Cal who is enjoying his first full season on the PGA Tour after being detoured by back surgery early in his career: “There are so many great players out there. My buddy was playing a mini-tour event on a good golf course in Jupiter, two days on a normal course, and 61-61 won. I mean, there’s not one person on the PGA Tour would’ve beaten that guy those two days, and that guy has no status anywhere. Great players are everywhere.”

4.) The PGA Tour isn’t easy after you get here, either.

Blair was disqualified last week in Charlotte during the Wells Fargo Championship for using a club that he had “altered.”

Explained Blair: “I had a five-footer at the fifth hole at Quail Hollow and missed it. Frustrated, I banged the shaft on my head. It wasn’t that bad, I went ahead and tapped in without thinking about it. I was playing the next hole and noticed a rules official and thought, maybe I should go ask. I knew if I bent the putter, I’m in trouble. He looked at it, and we agreed that wasn’t how the putter was supposed to look. He told me, ‘Well, you’re done,’ so I hopped in a cart and went in. I knew the penalty was disqualification. That’s why I asked him. I didn’t go crazy and whack my head with that putter or freak out but it was just hard enough, I guess. It was unfortunate, but I’ll move on.”

Malnati reached the PGA Tour before he was ready, thanks to a Web.com Tour victory in Knoxville three years ago. He made just three of 26 cuts the next year on the big tour.

“There was one moment I won’t forget,” he said. “I missed the cut at Torrey Pines, so I went out Saturday morning to get in some practice before I went to Phoenix. I was next to Jason Day on the range and I watched him hit shots. For the first time in my life, I felt completely inferior, I really did. If I was hitting balls next to him now, I’d still look inferior. But now I’m better and more consistent and I know the point of my full-game shots is to get me to the short-game shots, which is my strength. That’s where I’m going to beat people. Once I get inside 150 yards, that’s where I feel like the scales start tipping in my favor.”

5.) If you know just one thing about them…

Blair collects LEGOs. I ask what’s the most interesting item he’s built. “I have a couple of cool pirate ships that are pretty neat,” he said.

How big is the collection? “My wife made me put them in boxes so they’re all stored away in a closet now,” he said. “Hopefully, I’ll have a place to put them one of these days.”

Malnati is a sort-of poor man’s Jordan Spieth—his short game is stronger than his long game and Malnati classifies himself as a short hitter, unlike Spieth.

Said Malnati: “I’m not in Jordan’s class, I’m still getting better with my long game but when I’m on with my putter and short game, I feel like I’m as good as anybody. I proved that in Mississippi. There were 132 pretty good players and I beat them. Sometimes I do have to pinch myself and say, ‘Hey, bud, nobody handed this to you, you earned it.’ It does feel a little bit like a dream, but I know it’s not.”

And another thing, Sullivan’s first PGA Tour event was last year’s Memorial Tournament. He played at Bay Hill this year, so he’s gotten to meet Jack Nicklaus and Arnold Palmer.

“It’s been awesome to meet two legends of the game because they’re not around much in Europe,” Sullivan said. “I had a brief talk with Jack at Memorial. He said, ‘Hi, Andy, how are you?’ It was extremely startling that he knew who I was. That was incredible.”

One final thing about Sullivan that he wants you to know: “I always play golf with a smile on my face.”