[This story first appeared on si.com.]

Well, this is certainly a hair-raising issue.

Thanks to eagle-eyed Twitter users, it seems that ESPN decided to clean up Tiger Woods’ mugshot, which was released Monday after the golfer was arrested on suspicion of DUI.

If you zoom in on Tiger’s mugshot (below), this is what his hair looked like. Clearly, that was altered in the photo that appeared on ESPN. We can’t wait to hear the Worldwide Leader’s reason for giving Tiger a makeover. 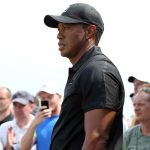