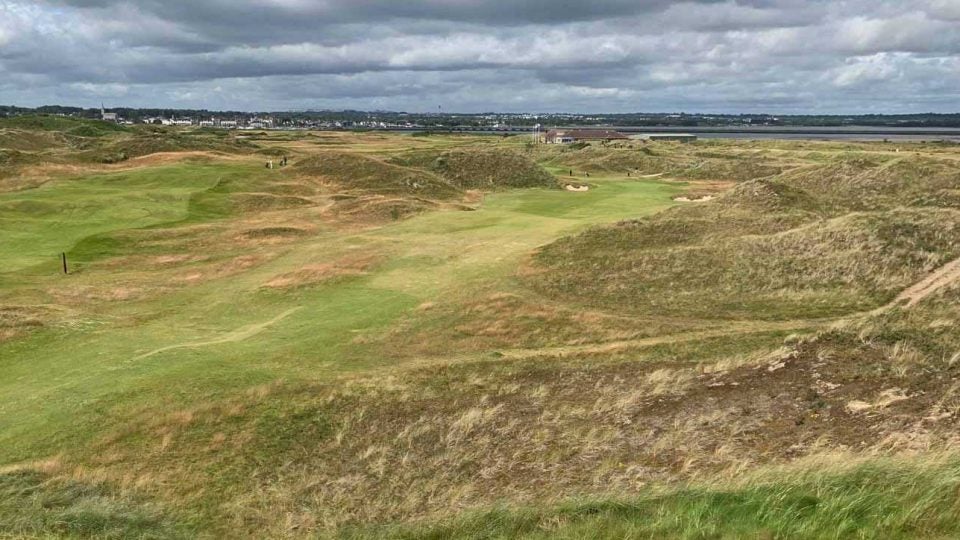 When it comes to Irish golf trips, the southwest coast gets all the love. This article is in no way disputing the greatness of the Irish west coast, of course. But when it comes to the the island of Ireland, there’s fantastic golf the whole way ‘round. What follows is an ode to the lesser-known golf destinations in the north and east, best played on endless summer nights, where only jetlag and the hope of a proper pint will keep you from 36 or more every day.

As Shane Lowry worked to hold his Sunday lead at this summer’s Open Championship, my friends Matt and Taylor flew over to meet me in Portrush, Northern Ireland. Monday morning after Lowry’s major triumph, we set out from Portrush and spent the next five days working our way down to Dublin, exploring the best golf we could find along the way.

Our basic framework was simple: We planned out some bucket-list level courses for each of our five mornings and then filled in our afternoons with lesser-known gems nearby. We started by trying to plan all this on our own, but once we reached out to the good folks at Carr Golf Travel (which I’d highly recommend) they got us on some dream courses and took care of all the logistics, which freed us up for even more stress-free exploring. Without further ado, a week in Ireland: 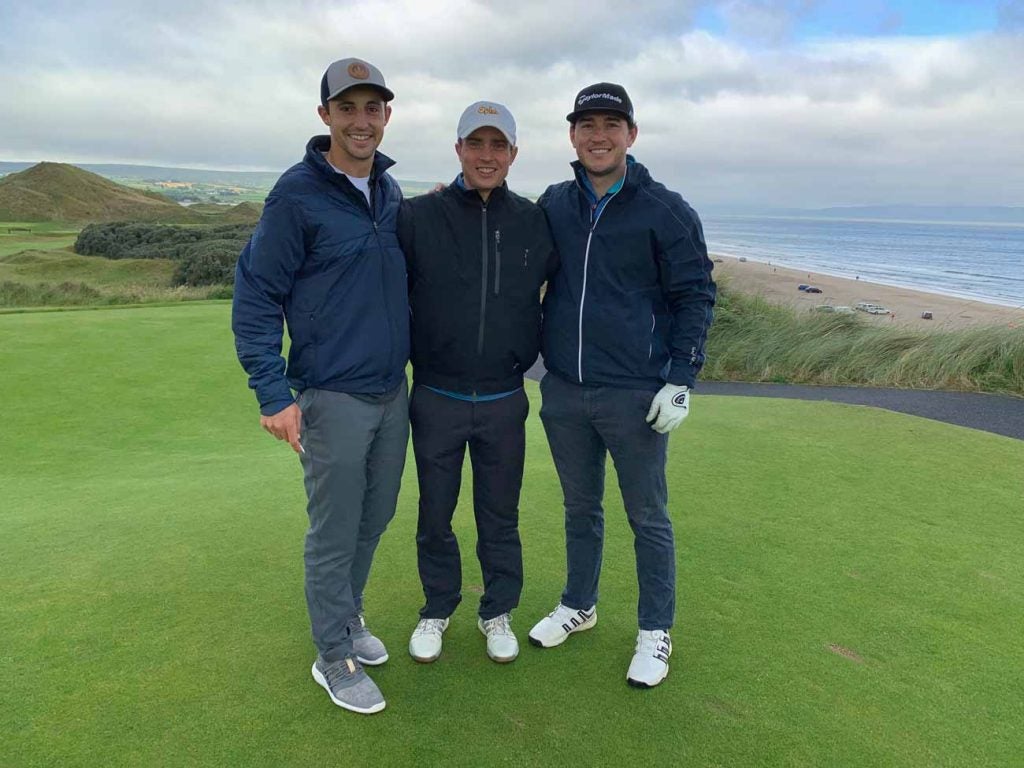 From left, the author, Taylor and Matt on the first tee at Portstewart.

If there’s a more striking first tee scene in the world, I have yet to see it. Beach to the right. Course to the left. Massive dunescape staring you in the face down the center. The 40 mph headwind added to the drama. This was a sensational treat. 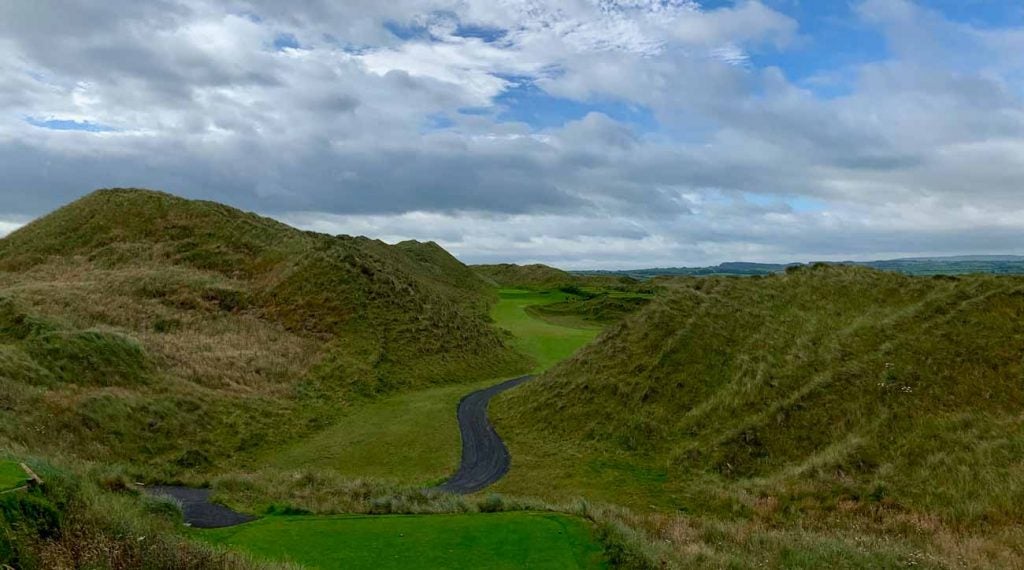 If this were in the U.S., no doubt we’d screw it up. But Ballyreagh is golf at its purest and most simple: A cheap, no-frills par-3 course by the ocean. No man-made frills, that is — the views are top-dollar stuff. The entire course stares out at the ocean, and the final four holes play cliffside back towards the pro shop, which is stocked with prime deals. 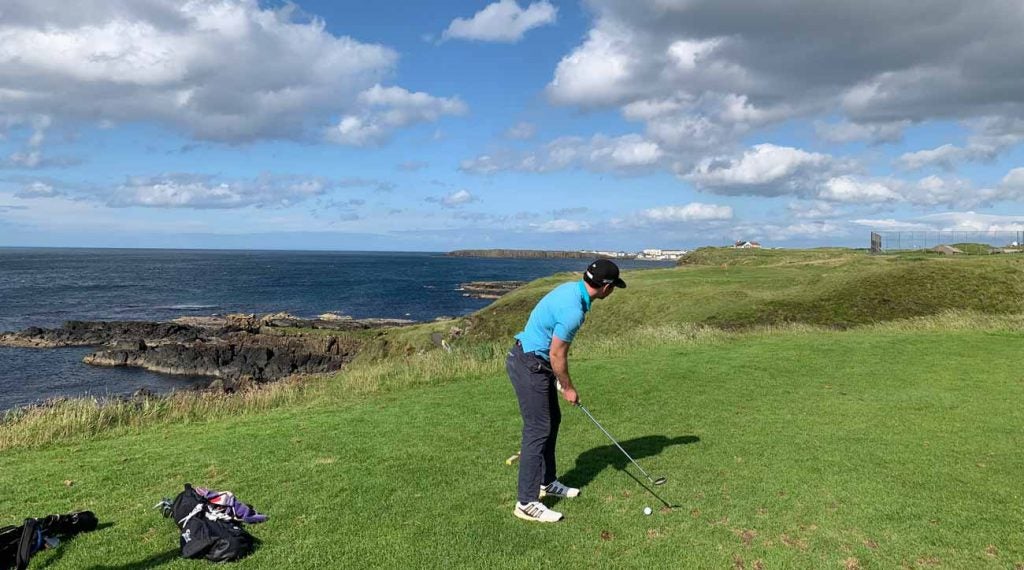 This course — for eight bucks?!

What else we found: Before the trip even began, co-worker Luke Kerr-Dineen and I played 18 at Castlerock Golf Club, just 20 minutes from Portrush, which was filled with dunes-y quirk and challenge and charm (though if you’re playing without local guidance, bring extra golf balls!). We crashed at an AirBnB in Belfast that night, but heads up: on weekdays, restaurants in Northern Ireland close up earlier than you’d think.

This was the only course we played the entire trip that could have just about been dropped in New Jersey. Somehow, I don’t even mean that as an insult. This was a parkland course in immaculate condition, with massive trees, great hole variety and super-slopey greens. Plus, the views across the bay towards Carrickfergus served as a reminder that we weren’t actually so far from the sea. 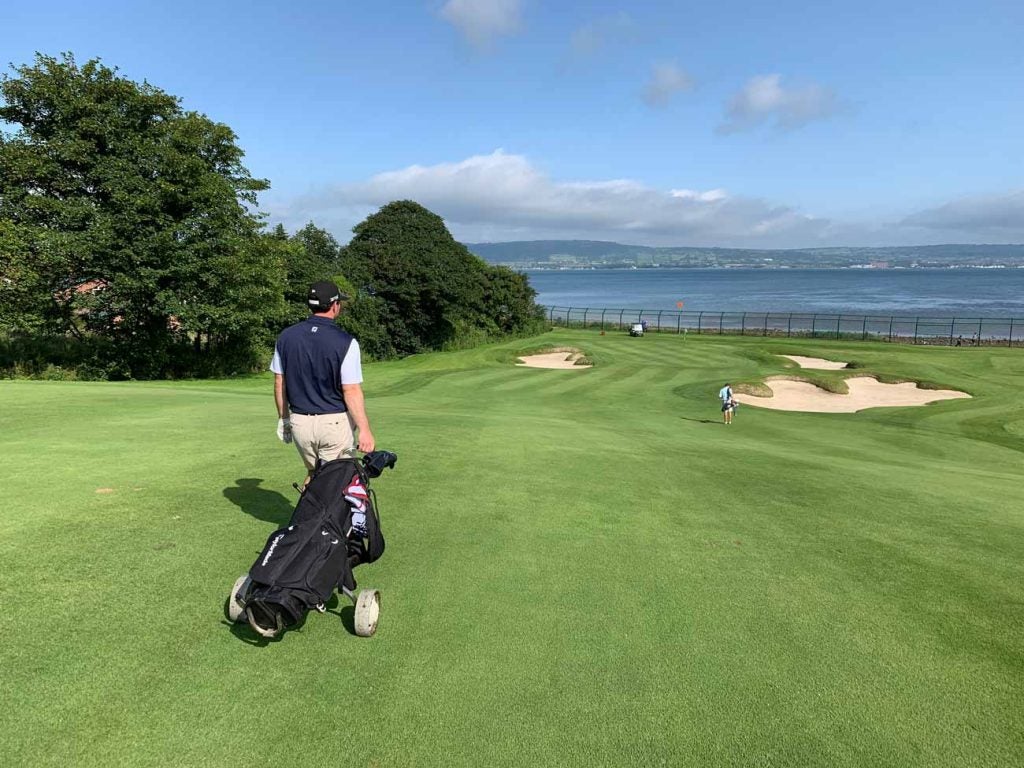 Matt rolls through Royal Belfast in all its glory.
Dylan Dethier

We took on Carnelea in a wicked wind for twenty-something pounds and found some fun, surprising holes on the front nine, capped off with the dramatic seaside par-3 9th. The design of the back nine felt forced by contrast, and we wondered if our time would be better spent with a Guinness in hand on the top level of the historic, view-heavy clubhouse. 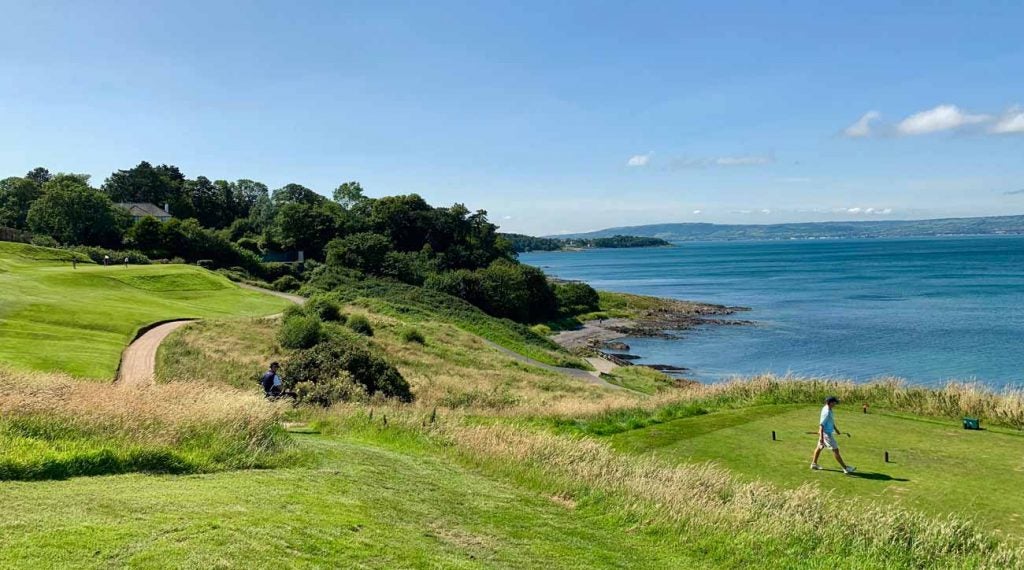 Carnalea Golf Club had a memorable 9th hole by the water.
Dylan Dethier

What else we found: We drove by Rory McIlroy’s home club of Holywood, though we didn’t venture in. We spent the night at the Salty Dog in nearby Bangor, where we made some friends sitting in the sun on the front patio before wandering out to dinner.

When you walk off the first tee at Ardglass, you’re struck with the best feeling in all of golf: the sense that you’re headed off on a wild adventure. With a 600-year-old castle for a clubhouse, raw, craggy seascapes, and quirks like stone cottages in the middle of fairways, Ardglass was simply the most memorable course of our entire trek. The day’s weather, which featured sun and wind and fog and rain, only enhanced the experience. I cannot recommend Ardglass highly enough. 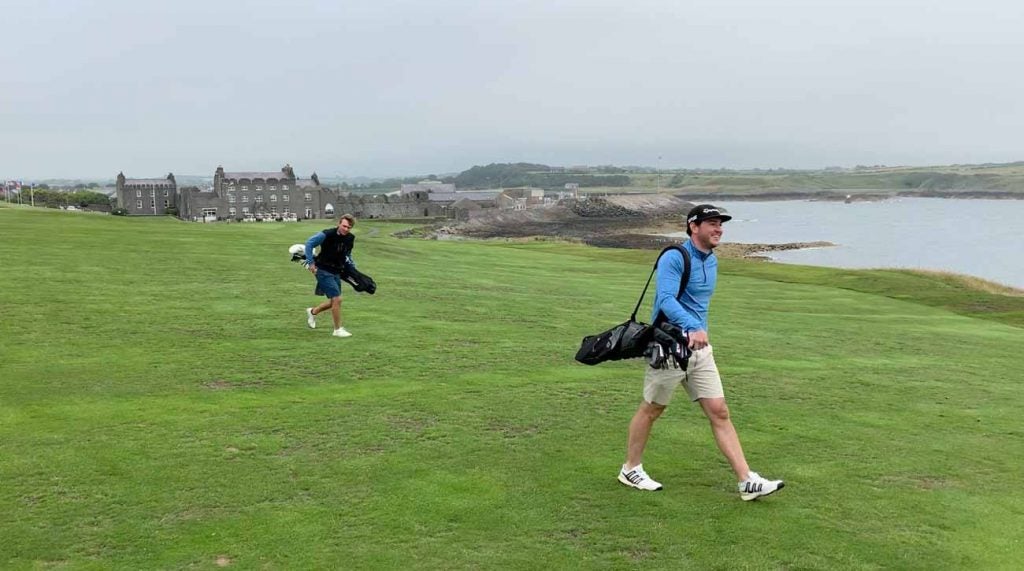 Matt and Taylor, with Ardglass' 600-year-old clubhouse/castle in the background.
Dylan Dethier

We hadn’t planned anything for the afternoon and needed to make some good headway towards Dublin, but County Louth came recommended and a quick note to our friends at Carr Golf yielded a mid-afternoon tee time. We found a course that was meaty but playable, winding a satisfying route through the dunes and stretching out our games. County Louth had less quirk than Ardglass but plenty of intrigue nonetheless. 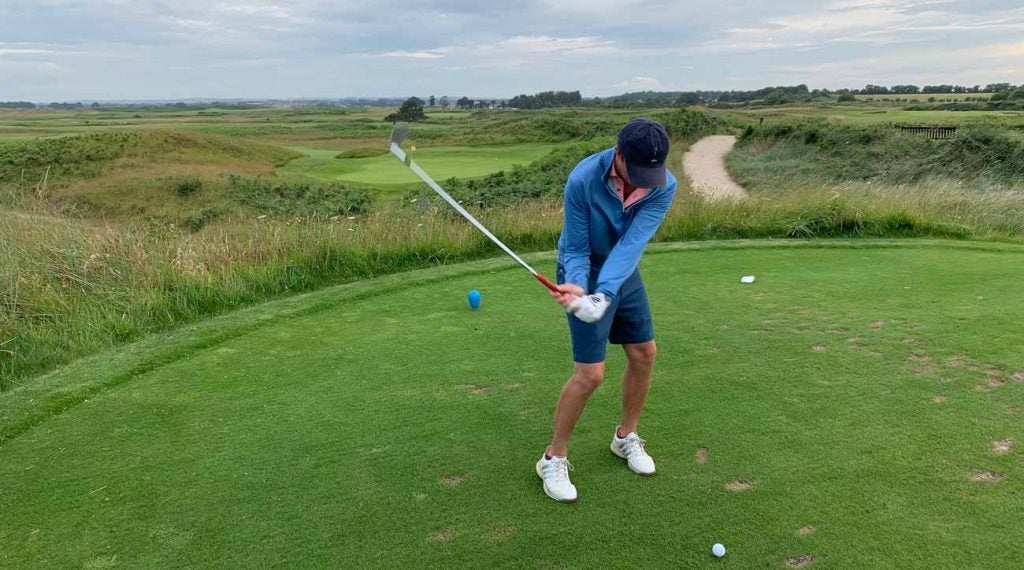 What else we found: We spent the night at an AirBnB in nearby Drogheda, where we found arguably our best dinner of the week at Scholars Townhouse Hotel. Worth stressing again just how affordable these AirBnBs were — we could lodge like princes for well under $150/night total.

We set off for Dublin early in the morning and wow, did we run into a test. We were fortunate to get access to Portmarnock, which is an old-school, uber-private classic links course set on a dramatic spit of land. Based on its exposed location, it’s not clear whether this could ever play in calm conditions, but we faced down some wicked wind, which made the teeth of the course even teethier. There’s a reason this is among the top-rated courses on the entire island; it’s a complete test filled with memorable hole after memorable hole. 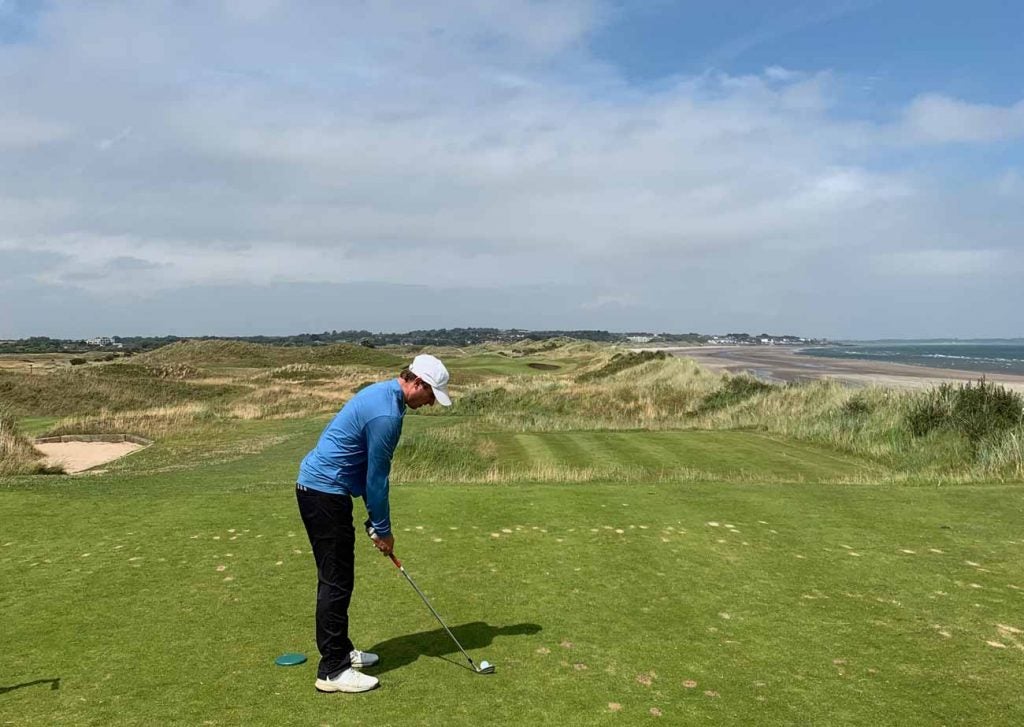 Afternoon: Dublin! Our only 18-hole day worked out perfectly; we were beaten to smithereens by Portmarnock and ready to retreat to our Dublin AirBnB for a siesta before taking on the town.

What else we found: We stumbled into Irish golf fixture and talented storyteller Shane O’Donoghue at Portmarnock and we met him later for a couple pints at the Long Hall on George’s Street, which was a major highlight of the night out.

The Island sits just up the coastline from Portmarnock, also on a spur overlooking the ocean (formerly an actual island, too). The best way to describe the success of the Island’s layout is that its first eight holes are all par-4s, and yet no two remotely resemble each other. 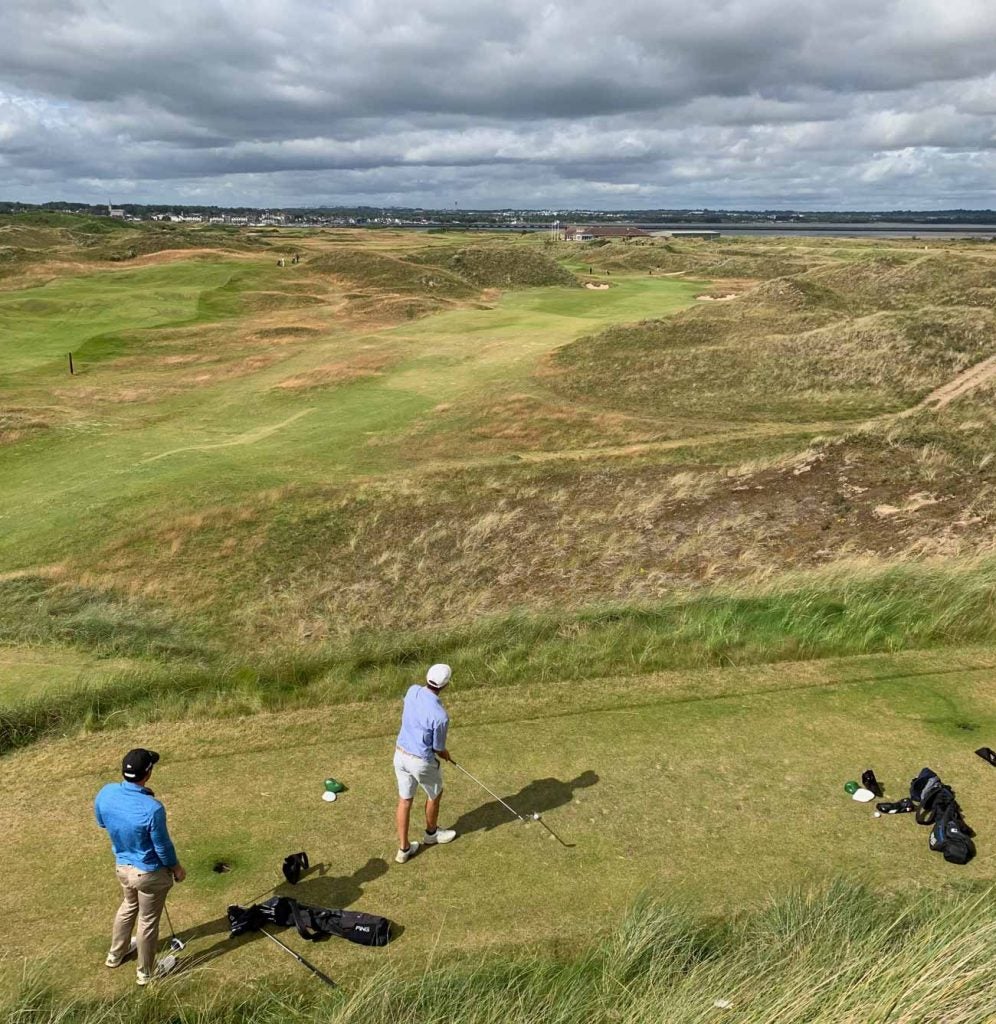 When Taylor mentioned that we’d zeroed in on Corballis as our final course of the trip, Shane O’Donaghue yelped with delight. (We took that as an indication that he might like to be our fourth; he didn’t take much convincing to join us.) This was the perfect course for a four-ball, a par-66 with quirky half-holes abound, slopey, multi-tiered greens that required careful negotiation and a routing that yielded plenty of birdie chances plus a dose of hair-tearing frustration, too. 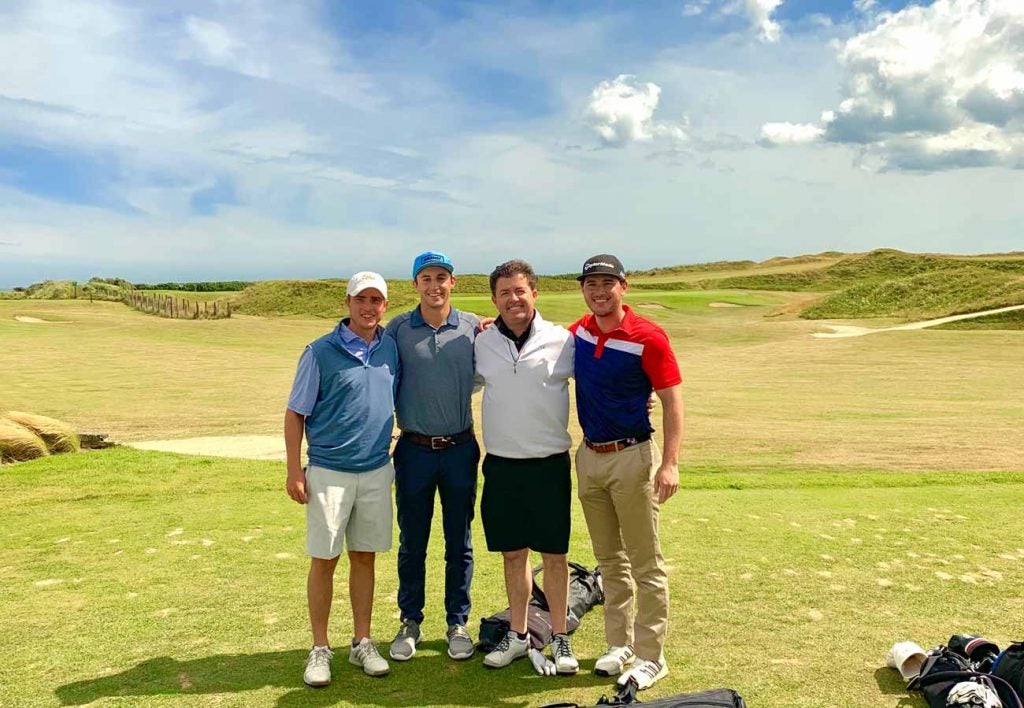 Corballis Golf Links made for a fantastic finale.

What else we found: Lunch at a food truck in the Corballis parking lot. Fresh, fun dinner at the Winding Stair. Wild (if touristy) nightlife at Temple Bar. Pint glasses raised to a week that felt straight from an Irish golf daydream.

Ours was far from the only Irish golf trip, and I’m far from the definitive expert on golf in the linksland. But ours was a route most one-time Irish visitors don’t consider. It was spectacular. If I have any advice at all, it’s this: if you’ve been thinking of a trip like this one, wait no longer. Pick a date, pick a few friends and book your flights! There are plenty of ways to do it without breaking the bank, and once you’re here, you’ll realize: in Ireland, enjoying your golf is serious business.