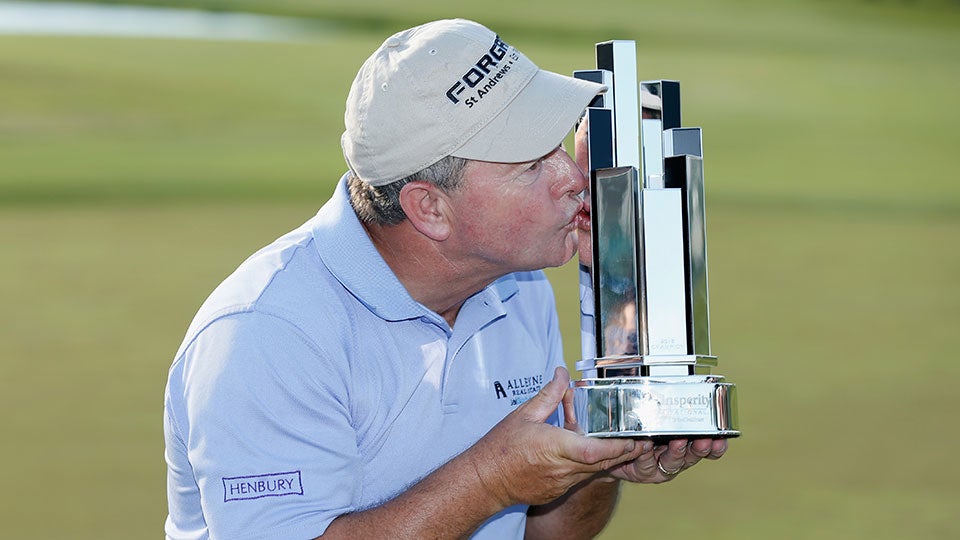 THE WOODLANDS, Texas (AP) — Ian Woosnam made a 30-foot birdie putt in a playoff Sunday to win the Insperity Invitational for his first Champions Tour title.

Woosnam, the 57-year-old Welshman playing on a sponsor exemption, beat Kenny Perry and Tom Lehman on the first extra hole at The Woodlands Country Club. The 1991 Masters champion was making his 36th start on the 50-and-over tour. Woosnam was dealing with back pain throughout the tournament.

“I managed to dig in and grind through it,” Woosnam said. “Feel like I’m getting a little bit too old to go through the pain, but it paid off. Felt a lot better today. Played some great golf and I was fortunate to long-putt on the playoff hole.”

In the playoff, Lehman sliced his approach on the par-4 18th into the water, and Perry left a long birdie try 8 feet short before Woosnam rolled in the winner.

Woosnam earned $307,500. Last week in Missouri, he teamed with Sandy Lyle to tie for second in the Legends of Golf. Woosnam won 29 times on the European Tour, captained Europe’s winning 2006 Ryder Cup team and has five victories on the European Senior Tour.

Lehman was upset with his second shot on the playoff hole.

“I dropped my 3-iron out of the bag this week and I had like 200 over the water into the wind,” Lehman said. “I didn’t have a club for the shot, so I tried to hit a really hard 4-iron and I kind of got ahead of it and came off it. It’s kind of bad yardage for me.”

Second-round leader Michael Allen shot a 72 to finish a stroke back along with Joe Durant (71).

“It’s frustrating,” Allen said. “I played so well all week and hung in there and fought it out. To kind of give it away like that is upsetting.”