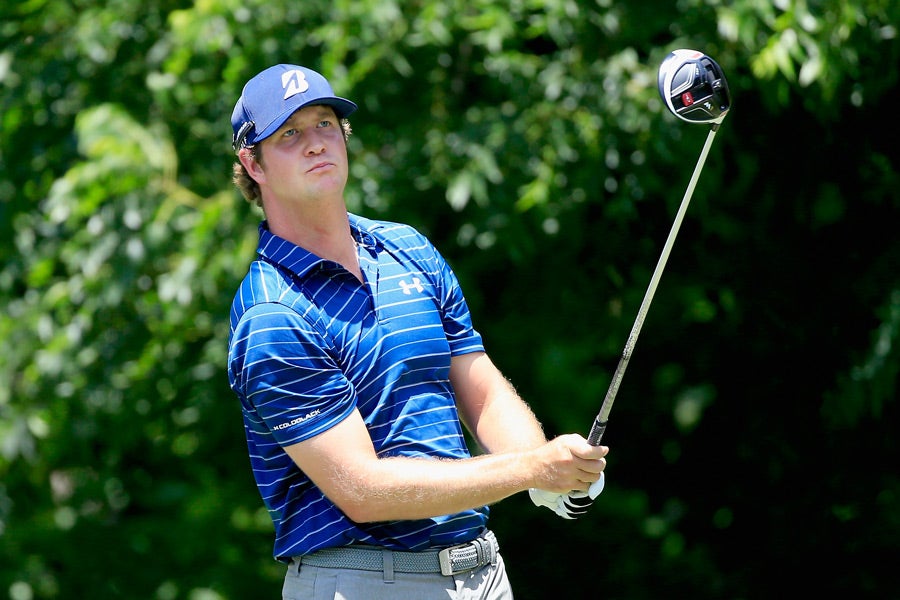 Hudson Swafford tees off on the 18th hole during the second round of the 2015 Zurich Classic on Friday.
Chris Graythen / Getty Images

AVONDALE, La. (AP) — Hudson Swafford didn’t want to dwell on the pressure of the high-stakes weekend that awaits him.

Tied for the Zurich Classic lead after a 6-under 66 on Friday in the suspended second round, the 2011 Georgia graduate was eager to meet some college friends from New Orleans and take advantage of being in Louisiana during crawfish season.

“I’m probably going to eat some mud bugs with my wife, some crawfish downtown, just walk around,” said easygoing Southerner, winless on the PGA Tour. “Got to see the sights here and take in the good food.”

Boo Weekley also was tied for the lead at 11 under when play was suspended ay at TPC Louisiana because of the threat of severe thunderstorms. Weekley, tied for first-round lead after a 64, had three holes left.

Jason Day, ranked sixth in the world, was 5 under for the round through 14 holes, pulling him into a five-way tie for third at 10 under with Brandon de Jonge, Cameron Tringale, former Zurich champion Jerry Kelly and Daniel Berger. Tringale had a 65, and de Jonge shot 70. Kelley was on the 18th green when play was stopped, and Berger had three holes left.

Second-round play was scheduled to resume Saturday at 8 a.m. CDT.

De Jonge, from Zimbabwe, was the co-leader after the first round and might have remained atop the leaderboard had he not narrowly missed several putts. But he was briefly tied for the lead again late in his morning round when he hit his tee shot within a few feet of the pin on the par-3 17th and made his birdie putt. He narrowly missed another birdie putt on 18.

“I gave myself a lot of chances,” de Jonge said. “I just didn’t make any putts.”

De Jonge, who has more than 220 PGA Tour starts without a victory, is well aware that seven of the past 10 Zurich Classics have concluded with first-time Tour winners, and hopes to continue that trend.

“Obviously, I would like to win and get the monkey off your back,” he said. “But when it’s your time;, it will be your time.”

The field remained tightly packed with birdies seemingly harder to come by on Friday. Many players cited a combination of wind, soggy turf from recent rains and thick, swampy air as reasons the course to play even longer than usual.

Seven more players were at eight under, including Marc Leishman, who returned to the PGA Tour this weekend after taking a month off from golf to tend to family when his wife became gravely ill.

With his wife, Audrey, recovering, Leishman came to New Orleans saying he just wanted to “knock off some rust.” He did a lot better than that and is now in line for a nice pay-day, given officials were estimating the cut line at four under.

Leishman was 10 under for the round through 17 holes, putting him in position to set a course record with a birdie on the par-5 18th. But after a booming drive, Leishman gambled on an aggressive second shot, using his driver on the fairway. He pushed his ball to the right and into a water hazard. When play was stopped, he was on the fringe, lying four, needing to sink his next shot on Saturday morning to tie the course record of 62.

“Hopefully, I’ll hole out or get up and down for bogey,” said Leishman, who shot a 74 on Thursday. “It was a good day, my expectations were pretty much non-existent this week.

“It’s just good to be out there and knock the cobwebs off,” the Australian added. “Today, I hit some good shots and holed some putts and all of a sudden you’re 10-under.”

Weekley, a three-time PGA Tour winner, continued to play well with new shafts that he credited for a strong first round after missing the cut in three of his previous four tournaments.

Swafford, in only his second season on the tour, had six birdies during his second round.

His best finish is tied for eighth at the Frys.com Open last October, though his most impressive outing may have been at last month’s Arnold Palmer invitational at Bay Hill, where he tied for 11th.

Swafford said he has been gaining confidence since adjusting his back swing earlier this year and figured he’d contend for a win before long.