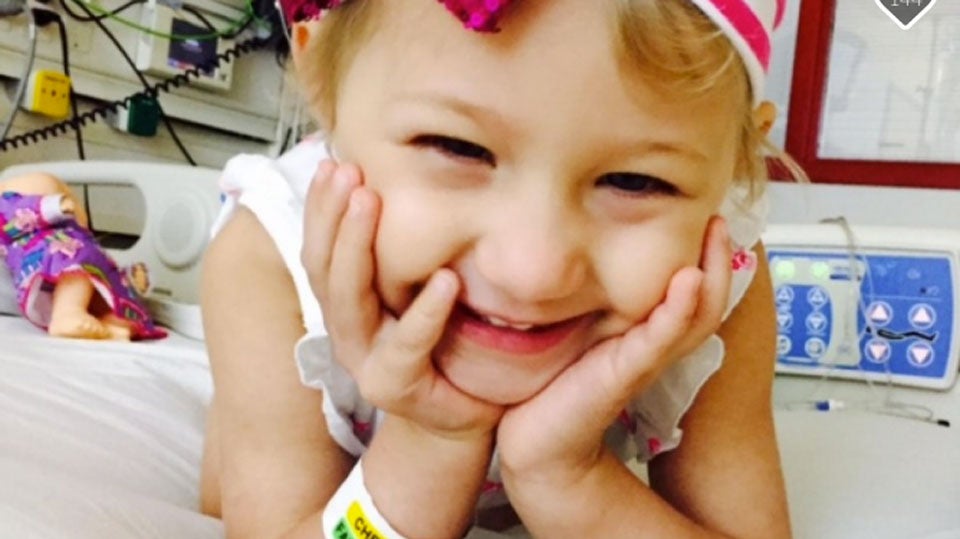 Austyn Halter was diagnosed with a rare form of leukemia in August of 2015.
Courtesy of Josh & Sarah Halter

Josh and Sarah Halter have been living every parent’s worst nightmare.

Their three-year-old daughter, Austyn, was diagnosed with a rare form of leukemia last August. The couple quit their jobs in Southeast Texas and moved Austyn to Houston, home of Texas Children’s Hospital, but after nine months and six rounds of chemotherapy, not only had she failed to reach remission, the cancer was spreading.

They had only one remaining option: an experimental stem cell transplant at St. Jude Children’s Research Hospital, the only institution where she was eligible for such a procedure.

So they flew Austyn to Memphis, where stem cells and natural killer cells from her mother were infused into her bone marrow.

But now the family is facing serious financial challenges. Austyn is still undergoing treatment, and from talking to other families going through a similar ordeal, Josh and Sarah are expecting a seven-figure medical bill that they’ll be paying for the rest of their lives.

That’s when Sarah got a call from Andrew Landry.

“Wait,” Josh said, when Sarah told him. “That guy we’ve been seeing on the news from the U.S. Open?”

Landry was a surprise contender in the 116th U.S. Open after firing an opening-round 66 at storied Oakmont to jump out to an early lead. It was a major breakthrough for the 28-year-old PGA Tour rookie who, since turning pro in 2009, had spent most of his career on the developmental circuit.

After Landry went low in the opener at Oakmont, however, he was suddenly occupying valuable real estate atop the U.S. Open leaderboard. Taking advantage of the prospect of some Fox face time, Landry’s agent, Jeff Stacy, hammered out quick sponsorship deal with Austin-based Moonshine Sweet Tea.

He wore wear the company’s logo on his sleeve over the weekend, and though he faded in Sunday’s final round, the company decided to extend the deal for the remainder of the season. This time it was Landry who got creative. He decided to donate the balance of the deal, $10,000, to the Halters. Landry had actually visited the hospital when he was in Memphis for the FedEx St. Jude’s Classic. It was clear the visit would have a profound effect on Landry even before he arrived. He revealed as much in a text message to his parents.

“At first I was scared to death to even do it because I wouldn’t think I would be strong enough but when I think about what they do everyday of their lives at such a young age I HAVE TO GO!” he wrote. “I will be meeting some of the strongest individuals on this earth and wouldn’t miss it for the world. It has already given me this warm feeling of being so blessed to be healthy and to be pursuing a passion that is in the big picture … just menial.”

He had stumbled across the hashtag #AustynStrong on social media, so he knew that a young girl from his hometown in Southeast Texas was at the hospital, and he wanted to try to meet her. But she was receiving treatment that day, so they couldn’t arrange a visit. Still, when Moonshine put up more money, Landry thought of Austyn.

“My mind immediately went to her,” Landry said. “I don’t have kids, so I don’t know what they’re going through, but I just wanted to help them out in some way.”

Landry took it one step further. He set up a GoFundMe page for Austyn to encourage his family and friends and match his donation. That worked too. As of this writing, Landry has raised an additional $12,380 from 133 people in just 12 days.

Josh says they plan to use the money to install a doctor-recommended air filtration system to mitigate Austyn’s risk of lung infection when she is finally able to return home.

Austyn was released from the hospital last week, though she will remain in isolation in special accommodations near the hospital and continue to receive treatment several times per week for the next 100 days. And the family received some encouraging news over the Fourth of July weekend: Austyn’s most recent biopsy results revealed that she is cancer free.

“She has a long road of recovery, but this is a huge step,” Josh said. “It’s the first time since the diagnosis.”

For the Halters, though they have yet to meet him, Landry has a bright future, and it has nothing to do with his peaking golf game.

“What Andrew’s doing is awesome, and not just for our daughter, but also for the awareness that it bring to childhood cancer, which is not something you really hear about a lot,” Josh said. “It’s really sad the amount of children that go through this. And for a young guy like Andrew to have his head be where it is, thinking of others, that’s remarkable. What an awesome role model for kids that look up to him.”

Landry doesn’t see it quite the same way.

“That was the easiest thing I could have ever done,” Landry said. “I’m just trying to do the right thing and help out a fellow Texas family. If everyone just helped everyone out, the world would be a much better place.”