How tree branches cost a player the PGA Championship lead 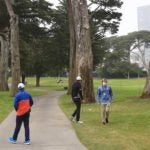 Haotong Li looks for his ball on the 13th hole at TPC Harding Park on Saturday.

There’s trouble above the fairways.

Haotong Li headed to the 472-yard, par-4 13th hole with the lead during Saturday’s third round of the PGA Championship. He left both without his advantage and without his golf ball.

Li hit his drive high and right. It stayed high and right. Li’s ball landed in the branches of one of the cypress trees that surround the holes at Harding Park, and it never came down. Li looked for three minutes, then he jumped in a cart with his caddie and re-hit from the tee. He would double-bogey the hole.

According to rule 18.2, “if a ball is lost or out of bounds, the player must take stroke-and-distance relief by adding one penalty stroke and playing the original ball or another ball from where the previous stroke was made.”

“This has happened at least a half a dozen times where a ball has stuck up in one of those cypress trees,” Brad Gregory of the PGA said on the CBS broadcast.

“With the overhang of these cypress trees and the ball – there may be a couple lost balls here,” Tiger Woods said before the tournament. “Cut a corner and ball hangs up there, that could happen very easily here and has happened and I’m sure will this week as well.”