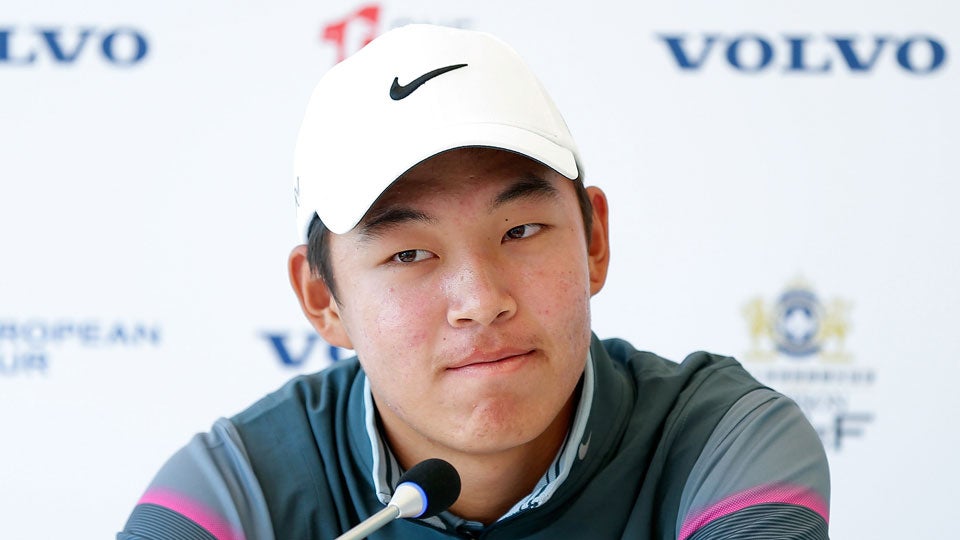 Next year, Jin Cheng will be the second Chinese amateur in four years to play in the Masters.
Getty Images

Beaumont is a hot, windblown desert city in Southern California with a public course called Oak Valley, within the roar of I-10 and hemmed in by a series of craggy, brown mountains. When Yani Tseng was starting out as a pro, six or seven years ago, Dave Stockton taught her there. Around that time Stockton told me about the course’s owner, a Chinese émigré named Huey-Min Yu, and his academy for junior golfers from China, among other Asian countries.

I recently saw Mr. Yu in his office at Oak Valley. His courtly deputy, Eric Chen, the academy’s admissions director, brought his boss a pot of green tea, and Mr. Yu talked about his adopted sport in his adopted country. “The golf course exit used to be 14th Street,” he said. “Not very sexy!” He lobbied Beaumont’s city council to change the name to Oak Valley Parkway.

The Presidents Cup was being played in Korea, and the Asia-Pacific Amateur, recently concluded, had been won by a 17-year-old Chinese golfer, Jin Cheng. That title comes with a Masters invitation, which means that in April, there will be a Chinese teenaged amateur playing at Augusta for the second time in four years. Mr. Yu considered this development, and his broad face broke into an easy smile.

He then made a prediction: After next year’s Olympics, when golf returns to the Summer Games, the Chinese government will finally embrace the ancient Scots’ game, in at least a limited way. Beijing, Mr. Yu explained, will continue to oppose golf as a leisure-time activity for the masses but will finally see golf as a sport that elite Chinese athletes could conquer with the world watching. Chinese golf, my tutor said, would eventually get its Yao Ming, the NBA’s first Chinese-born star. “Then they will build businesses around him, like Under Armour and Nike.” That is, clothing lines with logos.

Mr. Yu is an accountant by training and has been successful in different ventures, including, early in his American wanderings, a stint as a Deep South door-to-door Bible salesman. (He’s Buddhist.) He bought Oak Valley nearly 20 years ago. He used to get 250 players on a good day. Now a busy day brings 150. Mr. Yu rubbed the front of his baggy khakis and said, “I give Oak Valley $200,000 a year.” From his pocket.

Yes, he’s a cheerleader for Asian golf, but first and foremost he’s a businessman, and he believes that he’s spending his money wisely. He envisions a day when the members of the Chinese national golf team will use Oak Valley as their American training facility, to refine their golf skills—and to become educated in the American way. Getting more Chinese players on U.S. university golf teams is the next step in taking on the world.

Mr. Yu asked Mr. Chen to bring him Master Cheng’s Oak Valley file. It included the young golfer’s application to spend several weeks at the Oak Valley Golf Academy in the summer of 2012, which he did. One question, posed in two languages, read, “Who is your most admirable golfer?” Jin Cheng’s answer was…Lee Westwood.

At about 3 p.m. the golf academy’s after-school session began, and the entire enrollment descended onto the Oak Valley driving range. There was a big, strong 13-year-old girl who goes by Jenny, a diminutive 15-year-old boy called Shawn and a rail-thin 14-year-old boy nicknamed Jack. Mr. Yu dreams of a bigger student body, but for now that’s it, that threesome. They all attend a nearby private Seventh-day Adventist school, Mesa Grande Academy, and they all speak English. Each student lives with a different host family. Jenny can break 100. Shawn can break 90. Jack can break 80. With his parents half a world away, Jack had dyed his hair silver. “Professional golf is too much work,” he said. “I’d like to be a clothing designer.” There were little stylish clasps, one gold, one silver, attached to the collar points of his golf shirt.

The trio’s instructor, John Hartman, a youthful 70-year-old, asked, “How many of you have heard of Payne Stewart? None of you? He won a U.S. Open! Payne used to talk about six senses.” The golf teacher touched his nose, his mouth, his ear, the corner of his eye. He rubbed his skin. The big five. “The sixth is instinct.” The students did not look thunderstruck.

Five-thirty came. Quitting time. The kids packed up their golf bags, went to the clubhouse front door and waited for rides back to their host families. A car came up the Oak Valley driveway and Shawn raised his chin. He lives with his English teacher, Mrs. Cohen, his loco parentis mom. What she was serving for dinner Shawn did not know. Pizza, maybe. The young golfer was 6,000 miles from home.