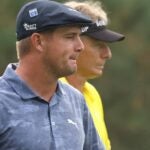 Bryson DeChambeau and Bernhard Langer were a compelling pair on Masters Sunday.

With all due respect to Dustin Johnson and his closest pursuers at the 84th Masters, the most fascinating group in the final round commenced their day on the 10th tee, nearly an hour-and-a-half before the leaders went off the 1st.

That group was comprised of Bryson DeChambeau, Bernhard Langer and Charl Schwartzel. No offense to the 2011 Masters champion, but what made this trio so compelling was DeChambeau and Langer, easily the longest hitter in the field grouped with easily the shortest of the 60 players to make the cut.

For weeks leading into the Masters — really since DeChambeau dismantled Winged Foot at the U.S. Open — the dominant storyline was how DeChambeau would surely overwhelm Augusta National with his mighty drives. Golfing minds reeled. Could he drive the green at the 1st?! Leave himself a wedge second shot into 13?! Shoot 59?! Anything seemed possible.

Meanwhile, the ageless wonder that is Langer (he’s 63) managed Augusta National with the precision of a brain surgeon. Through the first three rounds he hit 39 of 42 fairways — 39! — leading to 13 birdies. His first-round 68 was a masterwork in course management and when he followed that with a pair of 73s, he found himself in a Sunday grouping with DeChambeau.

David and Goliath. The bomber and the bunter. Hercules and the Herr. Call it what you wanted, it was must-watch golf: two radically different approaches to the game from players 36 years — and 80 pounds — apart, on a course that seems to get longer by the year, or at least every other year, in a desperate attempt to defend itself.

Here are 6 things their round taught us:

1. They were in awe of one another

It’s no surprise that Langer would have been eager to watch DeChambeau in action; he’s the greatest show in golf today. The way he grunts and twitches before he unloads on the ball. The insane angles he takes. The nerdy calculations he mutters under his breath. It’s hard to take your eyes off of him.

“I got to experience the longest guy in the world right now, and it’s quite amazing,” Langer said on Sunday afternoon. “Normally I play my own game. I don’t even worry about who I’m with and all that, but I was a little bit spectating here and there. I was in awe. Every once in a while I had to tell myself, ‘Go on, stop watching and play your game and focus on what you want to do.’”

More surprising, though, was that DeChambeau seemed equally intrigued by Langer.

“He grinds over everything, doesn’t give up,” DeChambeau said. “His long iron play is stellar still, and I think that’s what makes him so amazing, and definitely I still look up to him.”

A very short time. On their first hole, the downhill 10th, DeChambeau slung a 3-wood around the corner, his ball coming to rest 288 yards down the damp fairway. Langer pulled driver. Boom, 290! The arms race was on! (No, not really.)

There are endless way to illustrate the stunning advantage DeChambeau held over Langer in terms of distance but perhaps none starker than presenting the raw, cold data. Here are their final-round driving distances on all of the par-4s and par-5s, including the differential:

There are a couple of caveats — for example, Langer intentionally laid way back on the short par-4 3rd while DeChambeau banged driver — but over the course of 12 driving holes, the stats still do paint a vivid picture. Cumulatively, DeChambeau outdrove Langer by 768 yards — yes, more than seven football fields. Imagine giving up that kind of distance in your weekend money game (64 yards per hole!) and still staying competitive.

“This place has never played as long as it had this year,” Langer said Sunday afternoon. “I’ve never seen it as wet. Even today I hit a 3-wood on the 2nd hole, downwind. Went about this high, and it plugged. It actually came back. I saw my pitch mark, it had mud on it, and that usually doesn’t happen to that extent.”

4. The true magic of Langer

The numbers above raise one question above all: HOW DOES LANGER DO IT? How does a player who’s ceding that much real estate possibly hang around? There are a few answers.

5. This hole summed it up

One hole, in particular, epitomized the effectiveness of Langer’s style: the drivable (for some!) par-4 3rd. As mentioned, Langer hit a fairway wood, all of 220 yards, while DeChambeau flew it more than 100 yards past his playing partner and found the green. And yet … Langer made birdie, while DeChambeau settled for a dispiriting par.

“I was fortunate to hit three really good shots, made a great putt,” Langer said later. “[Bryson] drove the green, but it wasn’t easy. It was on the front right and the pin was front left. Usually that putt is lightning fast. I thought he hit a good putt, but it was 15, 18 feet short, so it was strange.”

At some point, even it’s hard to envision, the course will outgrow Langer. But that day doesn’t appear to be coming anytime soon. In fact, Langer said on Sunday that he thinks he has a “few more” Masters in him.

“I know how to play this golf course and just have to play my angles and rely on my short game,” he said. “With me, it’s really all the putter. If I can make a few putts, I know I can shoot somewhere around par or even under, and that’s usually good enough to hang in there.”

And sometimes it’s also good enough to beat a player half your age who flies his tee shots 80 yards past yours.

On Sunday at Augusta National, Langer signed for a one-under 71