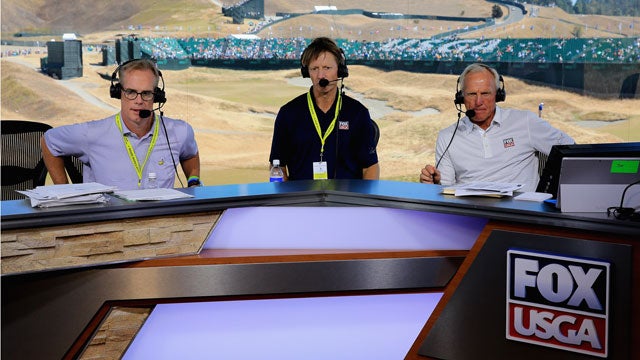 Joe Buck, Brad Faxon and Greg Norman rehearse before the first round of the U.S. Open.
Getty Images

Holly Sonders wants golf fans to give Fox’s golf broadcast team some time to get going, just like a golfer getting in rhythm on the course. In a conversation with Ryan Asselta on GOLF LIVE, Sonders insisted the situation was less than ideal, with Fox having to go into such a massive tournament with little to no prep time or practice reps.

“We all met each other twice before broadcasting the U.S. Open. So it’s like we met each other as a team and then we’re expected to get on the biggest stage in golf and be perfect? I don’t think anyone can expect that and nothing in live T.V. ever goes perfectly,” Sonders explained.

“The U.S. Open, any time you have a major championship in the game of golf, it’s like having a Super Bowl,” Sonders said, adding it’s going to take some time for their crew to match the level of continuity golf fans are sued to.

“NBC had the U.S. Open for what 20 years? New voices in the game of golf. It’s just different.”