Some avid golfers play tirelessly their whole lives without recording an elusive hole-in-one, but one high school golfer dropped two in just 40 minutes.

According to The Morning Call, Ben Tetzlaff, a 17-year-old senior at Parkland High School in Pennsylvania, completed the astounding feat on Monday during a nine-hole practice round at Iron Lakes Country Club in North Whitehall Township prior to a match with regional rival Emmaus High School. 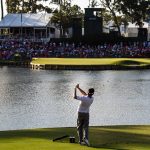 You may also like Master of None: Reflecting on a lifetime without an ace

The High Schooler’s first hole-in-one came at the 104-yard second hole, where he spun a gap wedge back into the cup. It was the first ace of his young playing career, but he didn’t have to wait long for his second. At the 140-yard 6th hole, Tetzlaff pured a 9-iron that bounced once before dropping in the hole, as reported by The Morning Call. The odds for such a feat? 67 million to 1, according to the National Hole-In-One Registry.

Tetzlaff’s team coach Scott Levan summed up the improbability of the feat nicely: “I know a couple guys who waited 60 years between holes-in-one, but I’ve never seen someone wait 40 minutes. I’ve never had one, so I still have a shot to beat his record.”