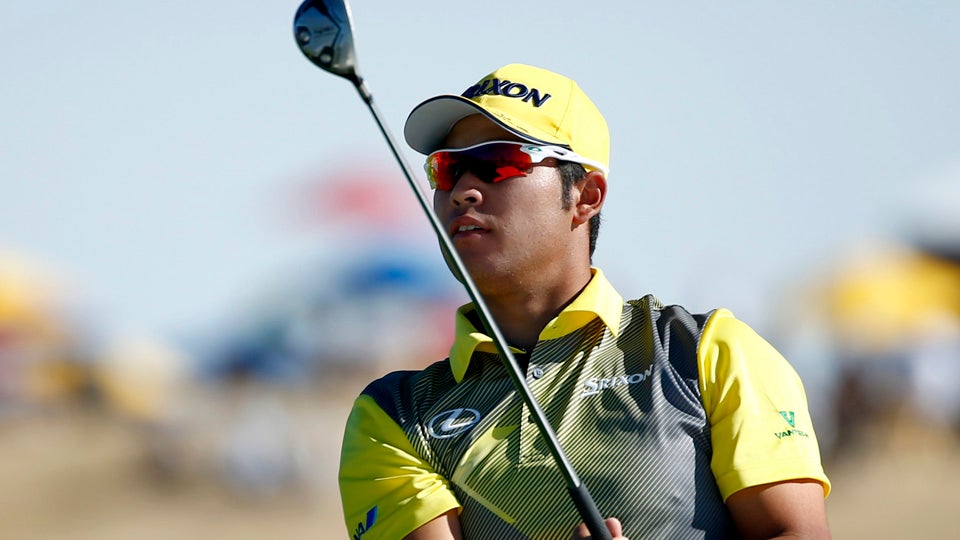 Hideki Matsuyama tees off during the final round of the Waste Management Phoenix Open on Feb. 7, 2016, at TPC Scottsdale.
Getty Images

SCOTTSDALE, Ariz. (AP) Rickie Fowler broke down in tears in the media center after his playoff loss Sunday in the Waste Management Phoenix Open, overcome by emotion talking about his family.

”The hard part is having all my friends and family and grandpa and my dad who haven’t seen me win,” Fowler said. ”But I will be able to kind of hang with them tonight. I’ll be all right.”

He hit two balls into the water on the par-4 17th hole – the first in regulation and the second on the fourth and final extra hole – to give Hideki Matsuyama an unexpected victory.

”This one hurts,” Fowler said.

He blew a two-shot lead on the 317-yard 17th in regulation when he blasted a driver through the green and into the water, with the ball traveling nearly 360 yards.

”I’m hitting a chip-cut driver,” Fowler said. ”Usually, don’t expect it to hit on the downslope and then go 360.”

Using a 3-wood on the hole in the playoff, he pulled his drive into the lake just short of the green.

”Hit it solid,” Fowler said. ”Just hit it a little high on the face and it just got up and left a little quicker than I was expecting and wanted.”

Matsuyama birdied the hole in regulation to tie for the lead, chipping to 2 1/2 feet. In the playoff, he chipped to 6 feet and two-putted for the win after Fowler missed his 10-foot par putt.

”Surprised and sad that Rickie finished that way, but all I can do is my best,” Matsuyama said through a translator. ”I was lucky to come out on top.”

Fowler forced the playoff with a 10-foot birdie putt on the par-4 18th after Matsuyama made an 18-footer. They each shot 4-under 67 to finish at 14-under 270 at TPC Scottsdale’s Stadium Course.

”The putt I made there was probably the best putt I have ever made in my life,” Matsuyama said.

The playoff was just as dramatic.

On the par-4 10th on the third extra hole, Fowler saved par with a 12-foot putt after driving into the left rough and skulling his approach long and right. Matsuyama made a 5-footer to extend the playoff.

They played the 18th hole twice to open overtime. On the first extra hole, Fowler chipped to a foot to set up a par after leaving his wedge approach short and right. Matsuyama rolled his 25-foot putt inside a foot. On the second playoff hole, Matsuyama matched Fowler’s 15-foot birdie putt to extend it.

”Maybe from the outside it looked calm, but then I was nervous inside,” Matsuyama said.

”It was a blast playing in front of all these people,” Matsuyama said. ”I’d say probably 99 percent were cheering hard for Rickie, but that gave me the motivation to go out and do it and win.”

Matsuyama won the 2014 Memorial for his only other PGA Tour title, beating Kevin Na on the first extra hole. The 23-year-old Japanese player tied for second last year in Scottsdale, a stroke behind Brooks Koepka.

Fowler missed a chance for his fifth worldwide win in nine months. He started the run in May at The Players Championship, and won the Scottish Open the week before the British Open, the Deutsche Bank Championship in September and the European Tour event two weeks ago in Abu Dhabi.

Fowler chipped in from 50 feet for birdie on the par-4 10th to take the lead and added birdies on the par-5 13th and 15th holes to pull two shots ahead. He missed a 10-foot birdie putt on the par-3 16th, the tournament’s signature stadium hole, before giving Matsuyama a chance with the long tee shot on 17.

”It didn’t look very good,” Matsuyama said. ”Then Rickie opened the door for me, and I was able to walk through it.”

Harris English shot a 66 to tie for third at 12 under.

Third-round leader Danny Lee had a 73 to drop to fourth at 11 under. The South Korean-born New Zealander began the day three strokes ahead of playing partners Fowler and Matsuyama.