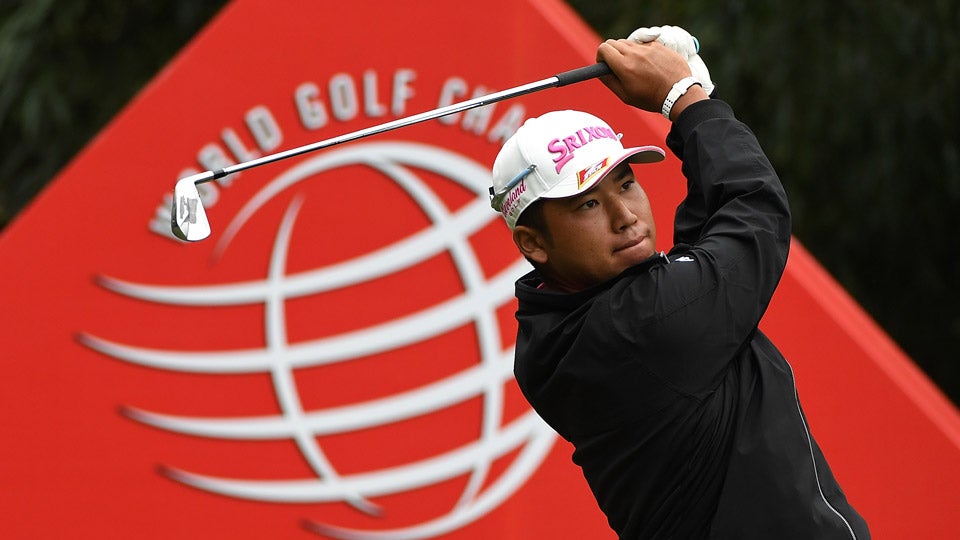 Hideki Matsuyama had four birdies and no bogeys in the third round of WGC-HSBC Champions.
Getty Images

SHANGHAI (AP) — Hideki Matsuyama of Japan kept a clean card Saturday and made just enough birdies for a 4-under 68 to maintain his three-shot lead in the HSBC Champions.

Matsuyama had made 19 birdies over the opening two rounds. He was even more satisfied with the third round because he played bogey-free for the first time all week at Sheshan International and didn’t give anyone much of a chance to close the gap.

Matsuyama made three of his birdies on the par 5s, including the final hole when he belted a 3-wood from 248 yards over the corner of the lake and onto the green, and he nearly holed the 25-foot eagle attempt.

“That was a big birdie, to take the lead from two shots to three,” he said.

Matsuyama was at 17-under 199 as he goes for his first World Golf Championship title.

Defending champion Russell Knox made a pair of birdies on the back nine and to keep in range, though he never could get closer than two shots of Matsuyama. Knox also shot a 68 and will be in the final group for the second straight year at the HSBC Champions.

Joining them will be Daniel Berger, who has used his short game to stay in contention. That was never more evident than the 18th hole, when he pushed his fairway metal into the middle of the lake and still managed to get up-and-down from the fairway to save par. Berger shot a 67 and was four shots behind.

Rory McIlroy tried to make a run and pulled off what he called one of the best short-game shots of his career for an unlikely birdie on the par-5 eighth. After sailing his 3-wood well right of the fairway on a thin patch of muddy grass, McIlroy faced a 50-yard shot over a creek with the pin on that side of the green. He hit a hard, low shot into the bank and it popped onto the green about 15 feet away, and he made the putt.

That got him within four of the lead, but the four-time major champion began dropping too many shots to keep the momentum. McIlroy needed two late birdies to salvage a 37 on the back nine, and his 70 left him eight shots behind.

Rickie Fowler also tried to get back in the game with a birdie-eagle start. He birdied two of the last three holes for a 68, but that was no better than what Matsuyama managed and Fowler remained seven shots behind.

The shot of the day came from Matt Kuchar, minus the reward.

He made a hole-in-one on the par-3 17th, with a car perched behind the tee for whoever made an ace. Kuchar happened to read the fine print, however. Because the tee had been moved forward, there was a notice that the car would not be awarded Saturday because insurance only covered a tee shot of 200 yards.

“That was probably one of the saddest hole-in-ones I’ve ever had,” Kuchar said after a 68 to finish eight shots behind.

Matsuyama will try to cap off a strong stretch of golf dating to his fifth-place finish in the Tour Championship. He won the Japan Open two weeks ago, followed that with a runner-up finish in the CIMB Classic in Malaysia, and now takes a three-shot lead into the final round of the HSBC Champions.

Matsuyama’s only birdie on a hole other than a par 5 was at No. 9. He wasn’t making as many birdies, though he thought this round Saturday was the right recipe as he moves closer to the trophy.

“The first two days, making lots of birdies, it’s a lot of fun,” Matsuyama said. “But today, when you’re in a position to win, playing smart and making no bogeys was very satisfying for me today.”

Knox was in a position of chasing, and having seen Matsuyama all day, he had a good idea of what it will take.

“I’m going to have to be foot down, be aggressive and try and catch him,” Knox said. “He’s playing very well. He drove the ball in play a lot. He’s an extremely aggressive iron player, and when he’s on, he’s as good as anyone. I’m not going to give up my title without a big fight tomorrow. I look forward to every minute and see what happens.”