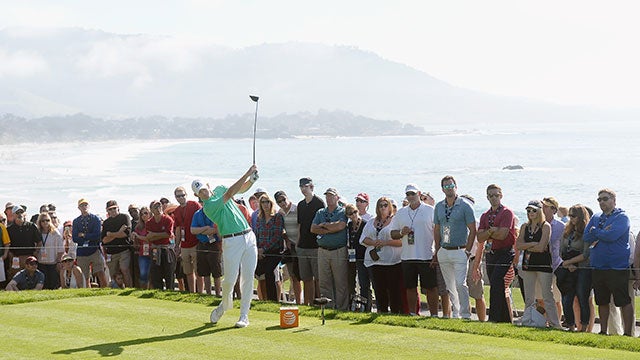 Pebble Beach didn’t have the best of fields this year, but this tournament may be remembered as momentous because of the fine play by some of the names on the leaderboard. Tiger Woods and Phil Mickelson loomed large in abstentia, as always, but as golf transitions into a new era we’re still looking for the guys who can push Rory McIlroy. Maybe the three most likely candidates all came strong at Pebble: Jason Day, who battled illness and fatigue from having played seven straight weeks and gutted out a tie for fourth, the latest big-time performance for a talented tease who is finally healthy; Jordan Spieth, who never really got it going but still finished T7, the latest evidence of how much his game has matured; and Dustin Johnson, who also tied for fourth in only his second start back since his non-suspension, an impressive showing from a gifted enigma who may or may not be ready to achieve his awesome potential. So was this a bad field or a good year at Pebble? Time will tell.

1. Golf fans. To go from the glory of Pebble/Spy/MPCC straight into Riviera? There’s not a better double-dip on Tour all year. 3. Nick Watney. Remember when he was the next big thing? I know, it’s hard, because it was so long ago. But Watney’s runner-up finish is hopefully a sign of bigger and better things to come. 4. Micah Fugitt. Billy Horschel’s caddie took home a $1 million bonus for the FedEx Cup win. When caddies are raking in almost as much as Tour vice presidents, well, the golf world is clearly askew.

5. DJ. It’s frightening how easy he can make it look sometimes. 1. Colin Montgomerie. Three back-nine bogeys had him coughing up the lead at the senior event in Naples. I know Monty has reinvented himself as a kinder, gentler version of his old self, but some things never change. 2. Miguel Angel Jimenez. Is it possible to display duende even whilst throwing up on one’s self? As MAJ proved in Thailand, the answer is no. 3. Jim Furyk. It’s one of the more amazing stats in golf: this aging warrior has now failed to convert his last nine 54-hole leads. Playing the first 10 holes at Pebble in +3 was the death knell this time. 4. Thongchai Jaidee. He fell one shot short playing at home in Thailand. On the bright side, he’s still the best former-paratrooper on the European Tour.

5. Chris Berman. Nothing in the world looks worse on TV than this doofus and his awful golf game. If we’re lucky the golf gods will smite him on the first tee of the first round next year. That would likely be the first solid shot Berman’s ever been a part of on the golf course.